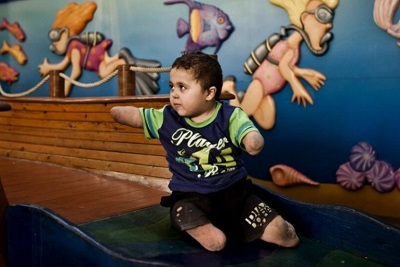 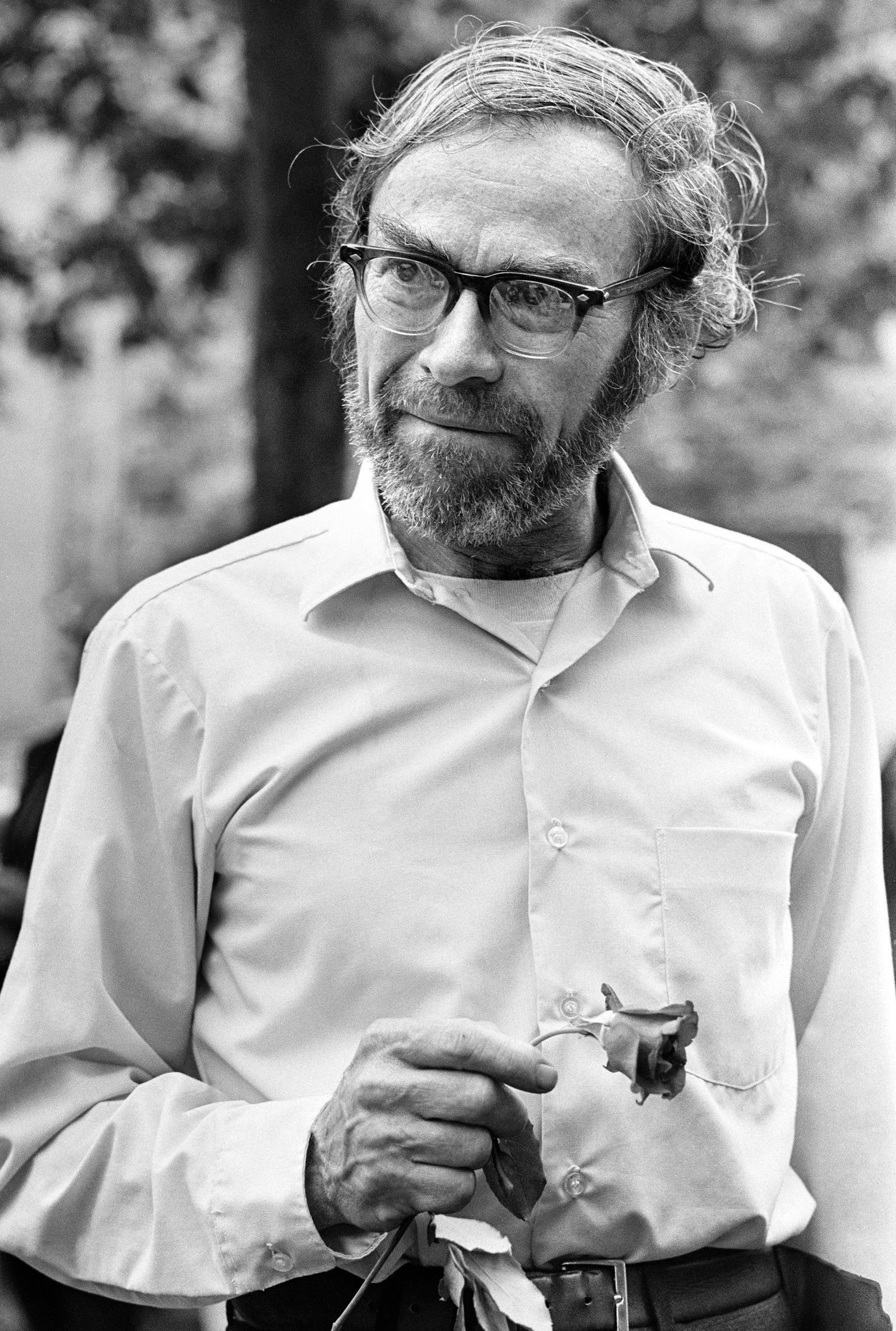 Morton Sobell in 1969. He was convicted in 1951 with Julius and Ethel Rosenberg of conspiracy to commit espionage.CreditCreditNeal Boenzi/The New York Times

Morton Sobell, who was convicted in the Cold War spy trial that delivered Julius and Ethel Rosenberg to their deaths and divided the nation for decades, died on Dec. 26 in Manhattan, his son, Mark, confirmed on Wednesday. He was 101.

Mr. Sobell, whose death was not reported at the time, had lived in the Bronx and then on the Upper West Side and had recently been in a nursing home.

Serving 18 years in prison until 1969, Mr. Sobell asserted his innocence until 2008, when, in an interview with The New York Times, he startled his defenders by reversing himself and admitting that he had indeed been a Soviet spy.

“Yeah, yeah, yeah, call it that,” he said. “I never thought of it as that in those terms.”

In the interview, he also implicated Mr. Rosenberg in a conspiracy that supplied the Soviets with non-atomic military and industrial secrets stolen from the United States government.

Mr. Rosenberg, an engineer from the Lower East Side of Manhattan, was tried along with his wife and Mr. Sobell in 1951 on the same charge: conspiracy to commit espionage. The government portrayed Mr. Rosenberg as the mastermind of an espionage ring that provided Soviet scientists not only with classified conventional weapons technology, but also with the know-how to enable them, by 1949, to replicate the plutonium bomb developed by the United States that destroyed Nagasaki in 1945 and ended World War II.

Mrs. Rosenberg was portrayed as her husband’s partner and accomplice in a plot that prosecutors all but blamed for emboldening China, with Soviet coaxing, to invade Korea in 1950.

Testimony by government witnesses entangled Mr. Sobell in the conspiracy, though no evidence was presented that tied him to the theft of any nuclear secrets.

After a two-week trial, during which Mrs. Rosenberg’s brother, David Greenglass, gave the most damning testimony, the jury found all three defendants guilty of conspiracy. Judge Irving R. Kaufman sentenced the Rosenbergs to death, calling their crime “worse than murder.” Mr. Sobell was given a 30-year prison term and later remanded to Alcatraz. Mr. Greenglass later admitted that he had lied about the most incriminating evidence against his sister.

On June 19, 1953, after exhausting two years of legal appeals, the Rosenbergs were executed in the electric chair at Sing Sing prison in New York. They were the only Americans to have been put to death for espionage-related crimes since the Civil War. 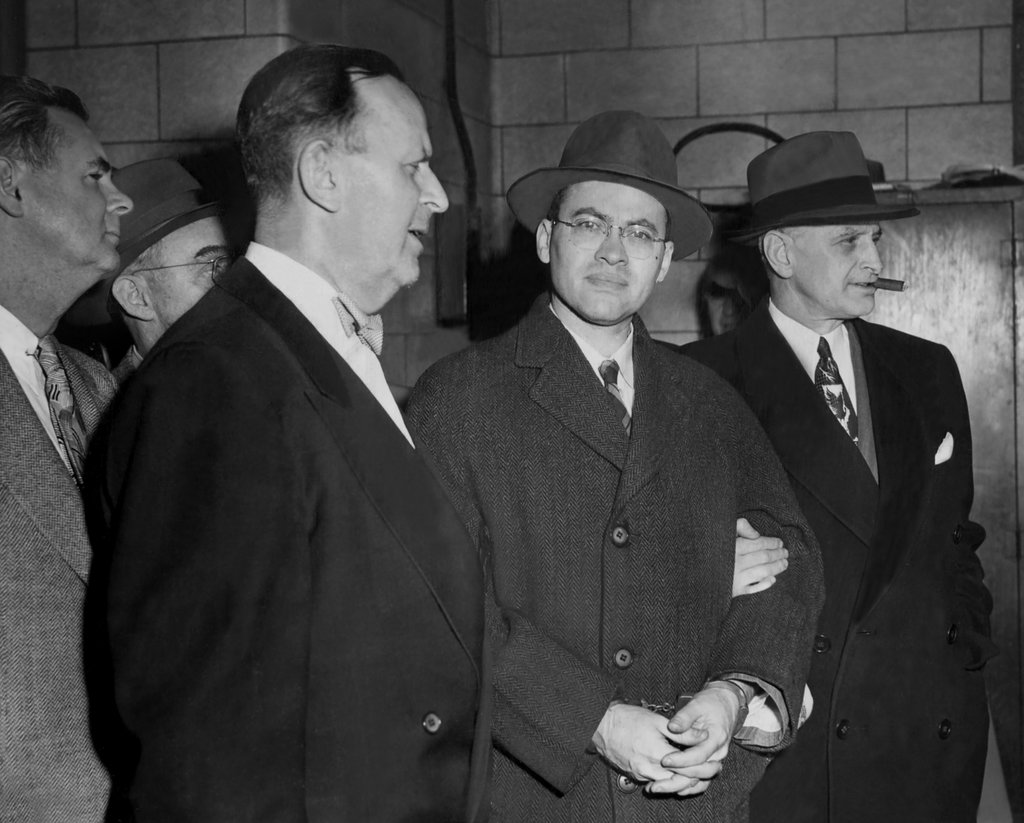 Mr. Sobell leaving the federal courthouse in 1951. He was sentenced to 30 years in prison, but was released in 1969.CreditGeorge Alexanderson/The New York Times

The verdict, and particularly the penalty, which orphaned the Rosenbergs’ two young sons, generated global protests, scarred America’s psyche and divided progressives from pro-Soviet communists. It became an unbridgeable fault line that would open an enduring gulf between liberals and conservatives.

Were all the defendants really spies? Did the information they deliver truly enable the Soviet Union to approach nuclear parity with the United States? Was the prosecution politically motivated, either to awaken Americans to the reality of Soviet espionage (as Mr. Sobell acknowledged decades later) or to shift public opinion and expedite another round of wholesale red-baiting?

By the 1980s and ′90s, as the Cold War waned, new revelations about the case emerged. In memoirs, old Soviet leaders wrote about the role of the spy ring, and aging K.G.B. agents spoke of their contacts with the Rosenbergs.

In 1995 the United States released the Venona papers,Soviet Embassy messages that American cryptographers had secretly deciphered a half-century earlier. They referred to a spy ring headed by a man code-named Liberal and Antenna, who was married to a woman identified only as Ethel.

He often expressed ambivalence about his part in the episode. He would pay homage to the Rosenbergs — Julius had been his college classmate and Young Communist League comrade — as heroes who had refused to save their lives by confessing or implicating others.

Mr. Sobell, too, had resisted government hints of a reduced sentence if he confessed. But he would also differentiate himself from the couple, arguing that he should have been tried separately and that the charges against him didn’t mention the atomic bomb.

In an interview with The Times in 1998, he implored a reporter: “When you write my obituary, please don’t say that I was accused of treason. I was charged and found guilty of conspiracy, which, you know, is like talking about espionage.”

He insisted that the secrets he had supplied to the Soviets involved only defensive radar and artillery devices rather than “stuff that could be used to attack our country.” But many military experts believe that one of the devices he mentioned specifically, the SCR-584 radar, was used against American aircraft in Korea and Vietnam. 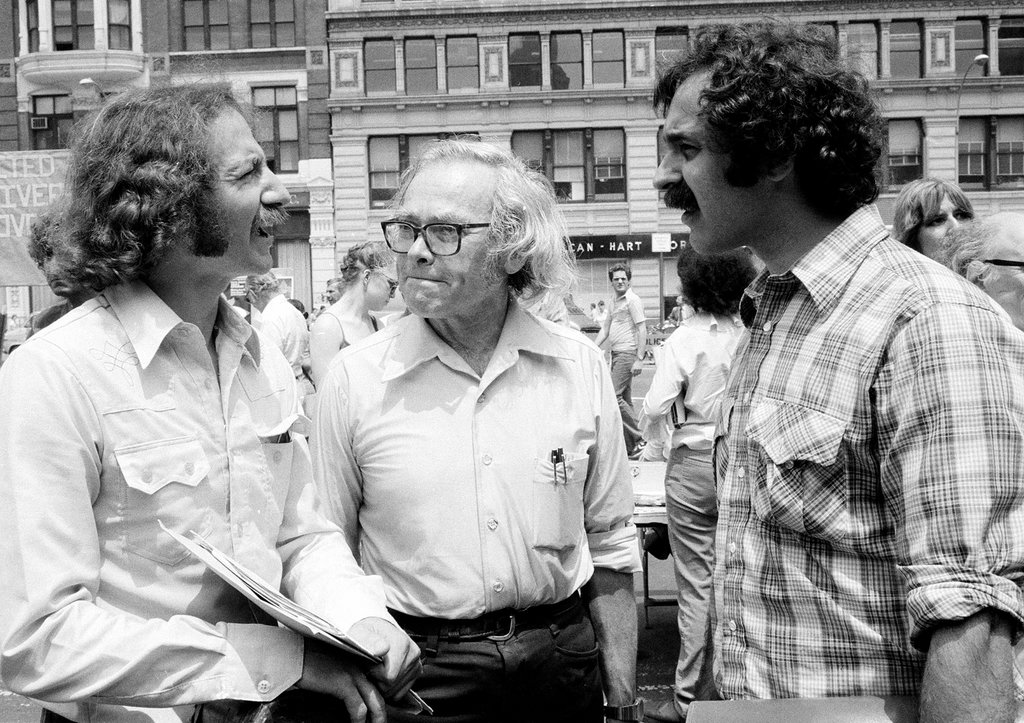 Mr. Sobell, center, in 1978 with Michael Meeropol, left, and his brother, Robert, the sons of Julius and Ethel Rosenberg. The Meeropols, who took the surname of the couple who adopted them after their parents were executed, met with Mr. Sobell in an effort to have the Rosenbergs’ case reopened.CreditAssociated Press

While the defendants were tried together, Judge Kaufman distinguished between the Rosenbergs and Mr. Sobell when he sentenced them. The Rosenbergs, he said, had enabled the Soviet Union to develop an atomic bomb years earlier than the United States had anticipated, leading to Communist aggression in Korea, where American troops were then fighting.

To Mr. Sobell, the judge said, “I do not for a moment doubt that you were engaged in espionage activities; however, the evidence in the case did not point to any activity on your part in connection with the atom bomb project.”

Still, the 30 years that Judge Kaufman meted out was the maximum sentence under the law.

Morton Sobell was born in Manhattan on April 11, 1917, to Louis and Rose Sobell, who had emigrated from the same Russian village before the Russian Revolution. His father, a pharmacist, opened a drugstore in the Bronx. In a 1974 memoir, “On Doing Time,” Mr. Sobell described Communist Party meetings held in his home.

At Stuyvesant High School in Manhattan he befriended Max Elitcher. They both studied engineering at City College, where they joined the Young Communist League and met Julius Rosenberg, a fellow student.

After graduation, Mr. Sobell and Mr. Elitcher worked for the Navy’s Bureau of Ordnance and shared an apartment in Washington. After working for General Electric in Schenectady, N.Y., Mr. Sobell joined the Reeves Instrument Corporation of New York in 1948 as lead engineer on a radar tracking system. He recruited Mr. Elitcher for the project. They and their wives were next-door neighbors in Queens.

At the trial, Mr. Elitcher supplied the bulk of the evidence against Mr. Sobell. He testified about a film canister that Mr. Sobell said he had at home — one that was too risky to keep but too valuable to destroy. According to Mr. Elitcher, at Mr. Sobell’s request, he drove him to Lower Manhattan and parked two blocks from the Rosenbergs’s apartment. Mr. Sobell got out and went inside. Mr. Elitcher waited in the car.

Mr. Sobell returned a few minutes later and told him that “Julie” had said that Mr. Elitcher no longer needed to worry about being followed, as he had been previously. Mr. Sobell said he never heard from Mr. Elitcher again.

Much of the case against Mr. Sobell rested on Mr. Elitcher’s testimony and Mr. Sobell’s sudden departure to Mexico with his wife and children after the arrest of Mrs. Rosenberg’s brother. In Mexico he used aliases, rented an apartment and sought ship passage to hospitable countries. On Aug. 16, 1950, armed men broke into the Sobells’ apartment and abducted Mr. Sobell, then turned him over to the F.B.I. at the border.

Mr. Sobell never testified in his own defense.

Once he was imprisoned, informants told the government that Mr. Sobell might reveal details of the espionage ring in return for a reduced sentence, but apparently his wife, Helen, persuaded him not to. 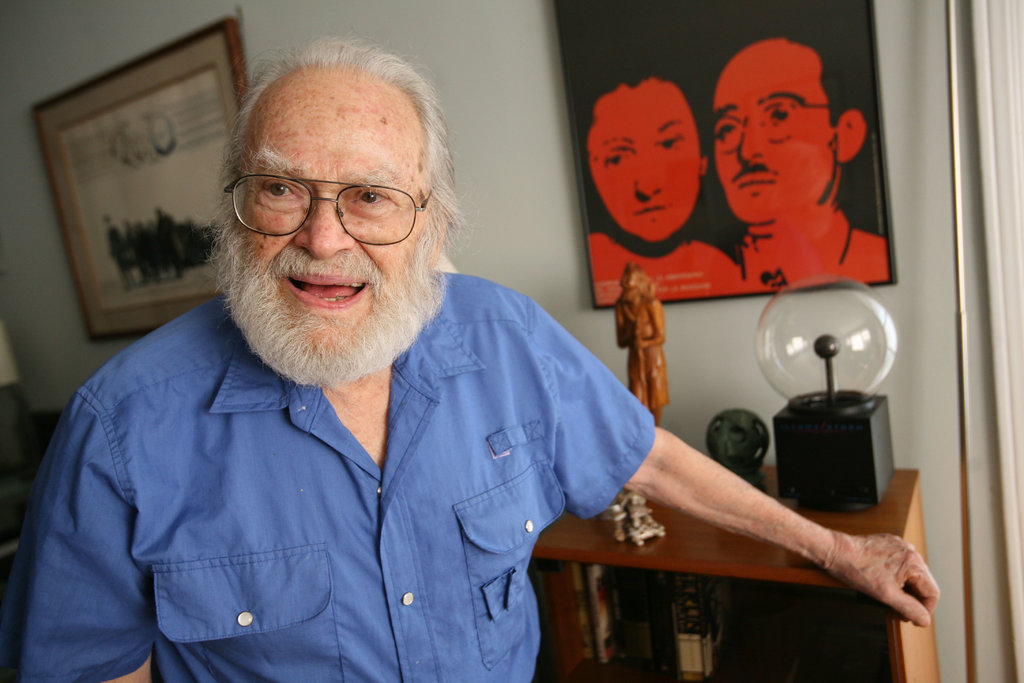 Mr. Sobell at his home in the Riverdale section of the Bronx in 2008. After years of proclaiming his innocence, he admitted in an interview that year that he had been a Soviet spy. A portrait of the Rosenbergs is on the wall behind him.CreditLibrado Romero/The New York Times

In prison he met the racketeer Frank Costello and the union boss Jimmy Hoffa. By Mr. Sobell’s account, Mr. Hoffa once saw him looking at personal photographs in the prison yard. “Hey, Morty,” Hoffa called out, “what do you have there, secret plans?”

In the prison library at Alcatraz, Mr. Sobell discovered an issue of Scientific American with an article about Robert Stroud, a convicted murderer who was being kept in isolation there. Mr. Stroud, who conducted ornithological studies in his cell, was portrayed by Burt Lancaster in the 1962 film “Birdman of Alcatraz.” Mr. Sobell expressed pride that he was able to sneak the article to Mr. Stroud.

The two later became friends while being held at the Springfield Medical Center in Missouri. “I was the only one who would eat with the Birdman at Springfield,” Mr. Sobell said, “because after all those years in isolation without utensils, he only ate with his hands.”

While Mr. Sobell was in prison, his wife gave up her career as a physicist and mounted a drive for his release through petitions, rallies and legal appeals, all of which were monitored by the F.B.I. The United States Court of Appeals in New York ultimately ordered his release on Jan. 14, 1969.

Mr. Sobell suggested that his wife had been aware of his guilt, but it was unclear what she knew and for how long.

While writing his memoir, Mr. Sobell studied electronics at Columbia University and taught at Polytechnic Institute of Brooklyn (now the New York University Tandon School of Engineering). He also worked for a medical supply company and developed a low-cost hearing aid, which he helped to distribute in Cuba and Vietnam.

His confession in 2008, his stepdaughter, Sydney Gurewitz Clemens, told The Times, “complicated history and the personal histories of the many millions of people, all over the world, who gave time, energy, money and heart to the struggle to support his claims of innocence.”

Mr. Sobell’s first marriage ended in divorce in 1980; Helen Sobell died in 2002 at 84. In 1993 he married Nancy Gruber. She died last July. In addition to his son, he is survived by Ms. Gurewitz Clemens and grandchildren.

Most of the protagonists in the case, Mr. Sobell included, were Jews who became Communists during the Depression, when capitalism seemed to be lacking and the Soviets asserted that they had outlawed anti-Semitism. They stayed committed to the cause when they spied, largely during World War II, when the Soviets were American allies against the Nazis.

Correction: Jan. 31, 2019An earlier version of a picture caption with this obituary, using information from The Associated Press, reversed the identities of the sons of Julius and Ethel Rosenberg, shown with Mr. Sobell in 1978. Michael Meeropol is on the left, Robert Meeropol on the right.

Michael T. Kaufman, who was a correspondent and editor for The Times, died in 2010.
A version of this article appears in print on Jan. 31, 2019, on Page A21 of the New York edition with the headline: Morton Sobell, 101, Who Spent Years Denying His Role as Soviet Spy, Dies. Order Reprints | Today’s Paper | Subscribe