WHO WILL FILL THE VACUUM LEFT BY ISIS?

A very interesting phenomenon has taken place in the Idlib area of Syria: the presence of the Islamic State has almost completely disappeared. 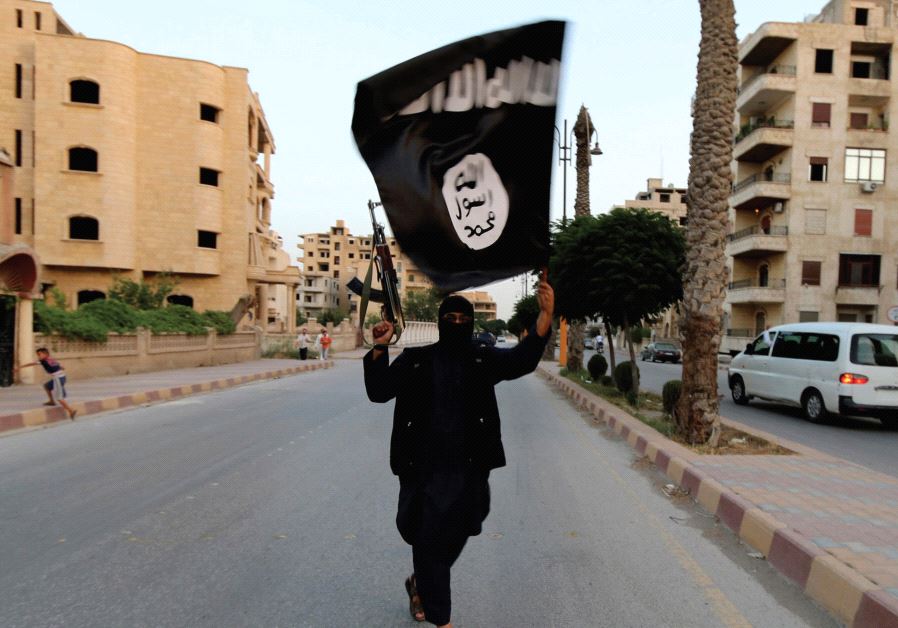 A MEMBER of ISIS waves the group’s flag in Raqqa. (photo credit: REUTERS)

Following extensive international media coverage, the United States recently announced it will be withdrawing its military forces from the Iraq-Syria border and from northern Syria.

This declaration came after US President Donald Trump claimed ISIS had been defeated. He added that the move had been coordinated with Turkish President Recep Tayyip Erdogan, following a months-long Syrian-Russian-Turkish initiative to create a buffer zone in the Idlib region.

Idlib is the last important area still under Syrian rebel control. A few thousand terrorists belonging to Jabhat al-Nusra, a local Salafist group that is the Syrian branch of al-Qaeda, still remain in Idlib. Fighting in the area is still ongoing.

As a result, Syria requires vital military support from Iran and Russia. Turkey is, of course, concerned about renewed Kurdish activity, and the international and internal discourse regarding the Kurdish struggle for independence. In addition, continued violence in Syria could lead to a new wave of Syrian refugees heading for the border with Turkey.

A very interesting phenomenon has taken place in the Idlib area of Syria: the presence of the Islamic State has almost completely disappeared. This radical Salafist group, which suddenly arrived on the scene a few years ago, and whose rule peaked and then sizzled about six months ago, operated as a quasi-governmental entity.

Currently, except for in a small number of outposts near the Israel-Syria-Jordan border region, ISIS forces have completely disappeared, leaving everyone wondering what the future holds for them and what we should be worried about.

First of all, the good news is that international military bodies are involved and are coordinating activity that will hopefully bring about a comprehensive change in how to deal with terrorist organizations. With respect to Syria, there is heavy Russian and only minor American involvement.

Moreover, there has been little threat to Israel or Jordan, despite the high potential for damage to the Hashemite kingdom’s police. An interesting question to ask, now that ISIS no longer poses an immediate threat to Israel, is whether the Islamic State – even at the height of its power – posed a serious threat to Israel.

Perhaps Israel should not have allocated so many resources for intelligence and operations to deal with this potential threat – resources that could have been used to counter threats which are more vital.

OTHER IMPORTANT questions deserve our attention. What did ISIS do with all the quality weapons it had at its disposal, including chemical, SAM, and SSM missiles? Where are the terrorist organization’s activists now hiding out? Where else will ISIS attempt to build a Salafist caliphate? Perhaps in the Sinai or Libya?

Above all, however, I think the most important question is: Did ISIS losing most of the territory under its control in Syria and Iraq signify that the organization will cease to exist? What will be the fate of the 14 branches which sprouted up around the world, such as Boko Haram in Nigeria? Should international intelligence organizations continue allocating significant resources to track ISIS and its satellite groups?

In my humble opinion, I think the ISIS branches will not disappear, and the loss of territory has not dampened these groups’ radical Salafist philosophy. ISIS is a terrorist organization that operates globally, and we should expect to see more terrorist attacks in different locations around the world.

Many attacks will continue to take place in Europe, since the terrorist organization already has well-established cells there, and a large number of refugees are already living there.

We should also expect, however, ISIS attacks in Sunni Arab countries – namely Saudi Arabia and other Gulf states, Jordan, Turkey and Egypt. These are countries where many Syrian refugees have found temporary refuge, and where ISIS has already established the infrastructure to carry out hostile terrorist activity.

In addition, it’s reasonable to assume that Israeli and Jewish sites around Europe will come under increased threat. Consequently, we must closely follow all attempts made by ISIS to establish new cells and learn new methods of anti-terrorist warfare, looking out for problematic areas such as the Sinai and Jordan.

The rapid rise and subsequent fall of ISIS over the last decade is a reminder that modern-day warfare has changed significantly since early days of the State of Israel. No longer is training a traditional military enough to defeat paramilitary terrorist organizations. Physically conquering land is also no longer sufficient to prevail in war. In this modern era of social media, we must be also victorious in the world of public opinion and political consciousness.

Perhaps the most important question of all is: Who or what will fill the vacuum left by ISIS? Which organization will succeed in becoming the new world center of hostile terrorist activity? It would be worth our while to invest time and energy in finding answers to these questions before it’s too late. We don’t want to be caught off guard again, as we were when ISIS came into power.

The writer is a former head of the IDF’s research intelligence division.
Translated by Hannah Hochner.

Who Will Google Silence Next?

Google and YouTube dominate internet search with over 75% of the market. If you disappear on Google, your ability to voice your opinion disappears too. PragerU is an educational non-profit that has had over 40 of their videos restricted by YouTube. That’s why they have recently filed a lawsuit against the tech giant. This is not just about PragerU being silenced – it’s about the targeting of dissenting opinions. Tomorrow it could be your point of view that is silenced.

Stand up for freedom of speech and fight back against online censorship by signing the petition today at: http://StopOnlineCensorship.com