The State of Israel 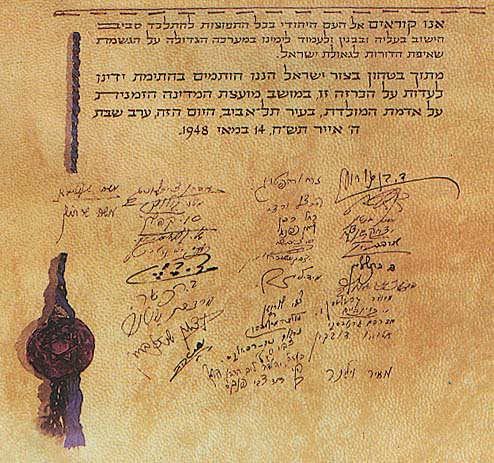 The Declaration of the Establishment of the State of Israel

The Land of Israel was the birthplace of the Jewish people. Here their spiritual, religious and political identity was shaped. Here they first attained to statehood, created cultural values of national and universal significance and gave to the world the eternal Book of Books.

After being forcibly exiled from their land, the people kept faith with it throughout their Dispersion and never ceased to pray and hope for their return to it and for the restoration in it of their political freedom.

Impelled by this historic and traditional attachment, Jews strove in every successive generation to re-establish themselves in their ancient homeland. In recent decades they returned in their masses. Pioneers, defiant returnees, and defenders, they made deserts bloom, revived the Hebrew language, built villages and towns, and created a thriving community controlling its own economy and culture, loving peace but knowing how to defend itself, bringing the blessings of progress to all the country’s inhabitants, and aspiring towards independent nationhood.

In the year 5657 (1897), at the summons of the spiritual father of the Jewish State, Theodore Herzl, the First Zionist Congress convened and proclaimed the right of the Jewish people to national rebirth in its own country.

This right was recognized in the Balfour Declaration of the 2nd November, 1917, and re-affirmed in the Mandate of the League of Nations which, in particular, gave international sanction to the historic connection between the Jewish people and Eretz-Israel and to the right of the Jewish people to rebuild its National Home.

The catastrophe which recently befell the Jewish people – the massacre of millions of Jews in Europe – was another clear demonstration of the urgency of solving the problem of its homelessness by re-establishing in Eretz-Israel the Jewish State, which would open the gates of the homeland wide to every Jew and confer upon the Jewish people the status of a fully privileged member of the community of nations.

Survivors of the Nazi holocaust in Europe, as well as Jews from other parts of the world, continued to migrate to Eretz-Israel, undaunted by difficulties, restrictions and dangers, and never ceased to assert their right to a life of dignity, freedom and honest toil in their national homeland.

In the Second World War, the Jewish community of this country contributed its full share to the struggle of the freedom- and peace-loving nations against the forces of Nazi wickedness and, by the blood of its soldiers and its war effort, gained the right to be reckoned among the peoples who founded the United Nations.

On the 29th November, 1947, the United Nations General Assembly passed a resolution calling for the establishment of a Jewish State in Eretz-Israel; the General Assembly required the inhabitants of Eretz-Israel to take such steps as were necessary on their part for the implementation of that resolution. This recognition by the United Nations of the right of the Jewish people to establish their State is irrevocable.

This right is the natural right of the Jewish people to be masters of their own fate, like all other nations, in their own sovereign State.

Accordingly we, members of the People’s Council, representatives of the Jewish Community of Eretz-Israel and of the Zionist Movement, are here assembled on the day of the termination of the British Mandate over Eretz-Israel and, by virtue of our natural and historic right and on the strength of the resolution of the United Nations General Assembly, hereby declare the establishment of a Jewish state in Eretz-Israel, to be known as the State of Israel.

We declare that, with effect from the moment of the termination of the Mandate being tonight, the eve of Sabbath, the 6th Iyar, 5708 (15th May, 1948), until the establishment of the elected, regular authorities of the State in accordance with the Constitution which shall be adopted by the Elected Constituent Assembly not later than the 1st October 1948, the People’s Council shall act as a Provisional Council of State, and its executive organ, the People’s Administration, shall be the Provisional Government of the Jewish State, to be called “Israel.”

The State of Israel will be open for Jewish immigration and for the Ingathering of the Exiles; it will foster the development of the country for the benefit of all its inhabitants; it will be based on freedom, justice and peace as envisaged by the prophets of Israel; it will ensure complete equality of social and political rights to all its inhabitants irrespective of religion, race or sex; it will guarantee freedom of religion, conscience, language, education and culture; it will safeguard the Holy Places of all religions; and it will be faithful to the principles of the Charter of the United Nations.

The State of Israel is prepared to cooperate with the agencies and representatives of the United Nations in implementing the resolution of the General Assembly of the 29th November, 1947, and will take steps to bring about the economic union of the whole of Eretz-Israel.

We appeal to the United Nations to assist the Jewish people in the building-up of its State and to receive the State of Israel into the community of nations.

We appeal – in the very midst of the onslaught launched against us now for months – to the Arab inhabitants of the State of Israel to preserve peace and participate in the upbuilding of the State on the basis of full and equal citizenship and due representation in all its provisional and permanent institutions.

We extend our hand to all neighbouring states and their peoples in an offer of peace and good neighbourliness, and appeal to them to establish bonds of cooperation and mutual help with the sovereign Jewish people settled in its own land. The State of Israel is prepared to do its share in a common effort for the advancement of the entire Middle East.

We appeal to the Jewish people throughout the Diaspora to rally round the Jews of Eretz-Israel in the tasks of immigration and upbuilding and to stand by them in the great struggle for the realization of the age-old dream – the redemption of Israel.

Placing our trust in the Almighty, we affix our signatures to this proclamation at this session of the provisional Council of State, on the soil of the Homeland, in the city of Tel-Aviv, on this Sabbath eve, the 5th day of Iyar, 5708 (14th May, 1948).

© Copyright 2003, The State of Israel. All Rights Reserved.
We welcome your Suggestions and Comments. Email: feedback@knesset.gov.il

The first thing you will notice about Yom Haatzmaut is the emotional transition from the sadness of Yom Hazikaron, Israel’s Day of Remembrance, to Israel Independence Day, an official national holiday which has become an important day in the Jewish calendar, being celebrated by Jewish communities around the world. Yom Haatzmaut begins at sundown immediately following Yom Hazikaron and ends after sundown the following day. It celebrates the declaration of independence of the State of Israel in 1948, making this the 71st birthday!

The state ceremony that brings in Yom Haatzmaut takes place at Mount Herzl, Israel’s military cemetery, by Theodor Herzl’s grave. And from there the city erupts with events, parties, outdoor get togethers, concerts and more!

The annual ceremony will feature ceremonial units, Yizkor prayer, words by Chairman of the Knesset, torch-lighting, transfer of flags ceremony, military parade, singing of the hymn, the IDF disabled veterans’ band, other military bands, and poetry reading. Entry by invitation only.

FESTIVE PRAYERS AT THE WESTERN WALL

Festive prayers at the Western Wall accompanied by dancing with live music.

INDEPENDENCE PARTY AT THE TOWER OF DAVID MUSEUM

The Tower of David Museum will host the annual alternative party. The party will feature workshops, dancing, and a live music performance by Tiny Fingers with Shai Ben Tzur.

Where: The Tower of David Museum, Old City, Jerusalem
When 8:30 pm
Get tickets in advance!

VIDEOART@SOUND
Sound & video screenings in the City Center. Experience sound, color and life as you wander through historic building.

Safra Square celebrations will kick off with a series of live shows and continue to a mass dance of Israel’s greatest folk dances. Musicians Dani Sandarson and Inbal Greshkovitz will perform live, and dance instructors such as Ilan Swisa, Hila Mokdesi and Yossi Miyara will make sure we dance our way to independence. Don’t miss!

Join a mass Independence Day prayer and sing-along in front of the walls of the Old City!

Nocturno Live is keeping up its annual tradition of a crazy all-night Independence Day party – check it out! Get details & buy tickets >>Where: 7 Betzalel Street, Jerusalem

FAMILY DAY AT THE ISRAEL MUSEUM

Israel Museum welcomes the whole family to join a proper Independence Day celebration with hora dancing performances for all ages by local dance troupes and the best public folk dancing at 11:00 am – 2:00 pm!While you’re there visit the museum and check out some of the most fascinating galleries and exhibitions in the world.Where: The Israel Museum, 11 Derech Ruppin Street, Jerusalem

Tower of David Museum celebrated Jerusalem’s 71st birthday and you’re welcome to join! The museum will host a variety of free fun activities:

Cost: Free admission. Based on availability.

Catch the Jerusalem Time Elevator and get a quick tour around the complex and exceptionally rich history of the lovely city of Jerusalem. You can also take the “I Jerusalem” virtual tour and visit Machane Yehuda Market, see the city from a bird’s eye view, and understand the history, the culture, and of course – the people.Where: 6 Yizhak Kariv Mamilla Avenue, JerusalemCost: Regular – 54 NIS; Soldiers: 27 NIS

On independency day entry and activities will be free of charge at the Ammunition Hill.Activities will include guided tours, film screenings, ammunition exhibition, photography exhibition, and more.Lectures and screening are based on availability. Contact for more details.Where: 5 Zalman Shragai St, JerusalemWhen: 10:00 am – 3:00 pm

Beit Levi Eshkol offers an interactive experience where you will learn about the life and work of Israel’s third Prime Minister – Levi Eshkol. This year the museum, located in Eshkol’s historic house, is commemorating 50 years since the death of Levi Eshkol. Take a tour around the various stations at the house and enjoy a unique audiovisual experience where you’ll get to know the people and events that shaped Israel.Where: 46 Ben Maymon Ave., Jerusalem

How much do you know about Israel’s history? Take advantage of this special day and go on a free self-guided tour for the whole family at the Menachem Begin Heritage Center. During this incredible tour, you will be exposed to the rich life of one the country’s most influential leaders – Menachem Begin. Please register in advance.In collaboration with Shimur organization and the Ministry of Culture & Sports.Where: 6 S.A. Nachon Street, Jerusalem

Join a true independence celebration at the Bible Lands Museum and enjoy 6 different tours for the whole family between 10:15 am – 1:00 pm. While you’re here, watch a live show with Sarale Sharon at 11:00 am.Where: 21 Shmuel Stephen Wise Street, Jerusalem

AGNON HOUSE – FOR FAMILIESThis year is all about “drawing in books” at Agnon House. Come and celebrate Independence Day with a wide range of family-friendly activities.