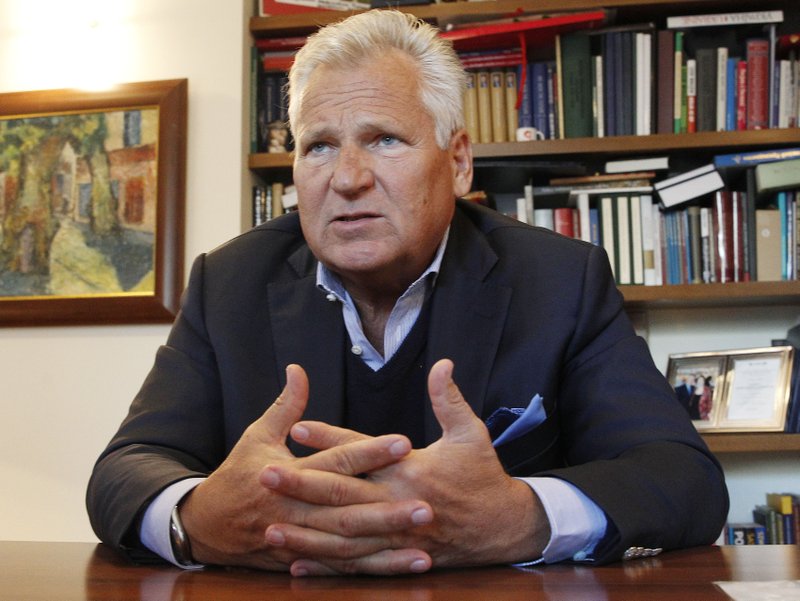 Aleksander Kwasniewski, a former Polish president and currently a board member for Ukrainian gas company Burisma, speaks to The Associated Press in his office in Warsaw, Poland, Thursday, Nov. 28, 2019. Kwasniewski says that when Hunter Biden was tapped in 2014 to join its advisory board, he told then-Vice President Joe Biden’s son that the company was working to overcome a difficult past and was determined to be well-managed and transparent. Kwasniewski also said he also told the younger Biden that if Burisma succeeded in tapping into Ukraine’s gas deposits, it would help Ukraine gain energy independence from Russia, a key part of its broader struggle to exist as an sovereign nation.(AP Photo/Czarek Sokolowski)

WARSAW, Poland (AP) — Aleksander Kwasniewski, a former Polish president who is on the board of the Ukrainian gas company Burisma, said Thursday that Hunter Biden was indeed chosen to join its advisory board because of his name. He said that is simply how the world of business works.

But Kwasniewski (kvash-NYEF-skee) insisted in an interview with The Associated Press that Biden was an active board member who helped the company, and that he never used his relationship with his father, Joe Biden, to further the company’s interests.

“I understand that if someone asks me to be part of some project it’s not only because I’m so good, it’s also because I am Kwasniewski and I am a former president of Poland,” he said. “And this is all inter-connected. No-names are a nobody. Being Biden is not bad. It’s a good name.”

Kwasniewski also said Burisma members never tried to use Hunter Biden to curry favor with the administration of Barack Obama when Joe Biden was vice president.

“He was a normal member of this group,” he said. “We didn’t ask him — and he never said anything — about his father.”

Only at dinners was Biden sometimes asked how his father was doing and on one occasion Biden spoke about the death of his brother, Beau, Kwasniewski said.

He said Hunter Biden carried out research and brought a unique American perspective to the company, including in the areas of corporate governance, capital markets and gas drilling equipment, where Americans are world leaders.

“He collected information,” Kwasniewski said. “He was useful for us because he knew something that we didn’t know.”

Biden’s time on the board from 2014 to 2019 has become a focus of the impeachment hearings into President Donald Trump. Trump is under scrutiny for pressing Ukraine’s young new president, Volodymyr Zelenskiy, to carry out investigations into the Bidens and Burisma, withholding for a time nearly $400 million in military aid as a war drags on in Ukraine’s east against Russia-backed separatists.

Asked to respond to Trump describing Hunter Biden as a “disgrace” due to his Burisma connection, Kwasniewski shot back: “This man is speaking about someone who is disgraced? Donald Trump? It should be forbidden for him.”

Nevertheless, some U.S. officials at the time thought it was inappropriate for Hunter Biden to be serving on the company’s board when his father, as vice president and Obama’s emissary to the region, was pushing Ukraine to clean up systemic corruption.

During the impeachment inquiry this fall, George Kent, a career diplomat overseeing Ukraine policy, testified that in 2015 he warned the vice president’s staff that his son’s position with the company “could create the perception of a conflict of interest” but nothing was done about it.

Burisma founder Mykola Zlochevsky, who had been the minister of natural resources under former President Viktor Yanykovych, ran into trouble after Yanukovych’s 2014 ouster. Prosecutors accused him of abusing his position to embezzle state money.

It was in that context in 2014 that Kwasniewski, Hunter Biden and others were invited onto the board as part of a strategy by Burisma to clean up its reputation.

His strategy worked and the company has continued operating. However, Zlochevsky, who lives abroad, is still facing a probe on suspicions of large-scale embezzlement.

Kwasniewski acknowledged that the company has a difficult past “because the past of all companies, all fortunes in Ukraine — diplomatically speaking — are very complicated.”

“But now the company is really well organized,” Kwasniewski said. “They want to work according to the rules. The role of this company is very important for Ukraine because the success of Burisma means less dependence of Ukraine on Russia.”

When Hunter Biden was tapped for Burisma, Kwasniewski had a short phone call with him in which he told him Burisma was determined to be well-managed and transparent.

Kwasniewski also recalled telling him that if Burisma succeeded in tapping into Ukraine’s gas deposits, it would help Ukraine gain energy independence from Russia, which is key to its broader struggle to exist as a sovereign nation.

Kwasniewski, who was Poland’s president from 1995 to 2005, explained that that was his own reason for signing on to Burisma’s advisory board.

He jokingly called Burisma “the most popular company in the United States,” but turning serious, said Burisma colleagues are upset at being dragged into a U.S. political affair and feel like “sailors on a small boat in the middle of a cyclone.”

“For the company it’s a difficult time,” he said. “And they are innocent in this situation.”

He said Burisma now produces about 25% to 30% of the gas on the Ukrainian market and Ukraine — where Russia in past winters has turned off the gas flow as a form of political pressure — is in fact becoming “less and less dependent on Russia.”

U.N. promotes Islamic-commissioned report against Israel in the West Bank

1) The United Nations Human Rights Council issued a report in which it listed 112 business entities that operate on lands, which the council defines as “occupied Palestinian territories.”

2) At least 10 clusters of balloons, presumably rigged with explosives, were reportedly seen crossing the coastal Palestinian enclave toward Israeli territories.

3) An exchange of fire ensued between Syrian militants and U.S. forces in Syria’s northeastern al-Hasakah province, when an American convoy was abruptly stopped at a pro-regime checkpoint, in the village of Kherbat Amo – east of Qamishli city.