Proceedings at the International Criminal Court (ICC) in The Hague, Netherlands, February 16, 2021. Photo: ICC-CPI/Handout via Reuters.

The Palestinian version of eating your cake and leaving it whole is particularly macabre and sinister. On the one hand, the Palestinian Authority (PA) actively brainwashes Palestinian children to hate, kill, and be killed. Having sent the kids to die, the PA then uses their deaths as a means to attack Israel, in any forum possible, including the International Criminal Court (ICC), alleging that Israel that is responsible for the many Palestinian kids and youth dying.

The PA and its Fatah party convince young Palestinian children to commit violence and terror by actively promoting violence and glorifying past terrorists. In addition, they arrange events at which children dress as soldiers and pose with real weapons, making them feel like soldiers of a worthy cause.

The following are photos from one event illustrating this PA/Fatah indoctrination of children.

When the Qalqilya branch of Fatah’s Lion Cubs and Flowers children’s movement participated in a ceremony marking the anniversary of the death of former PLO and PA Chairman Yasser Arafat and the 1988 Palestinian declaration of independence, children posed with weapons in military uniforms on stage: 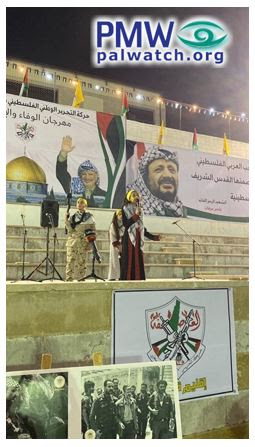 A boy is dressed in a military uniform, holding what appears to be a real M4 carbine rifle. The children are wearing yellow Fatah headbands.

This was just one event of many such events. PMW has exposed that PA summer camps train children in terrorism, handling weapons, and combat and military drills. Palestinian leaders also make children pose for photos with real weapons.

Having actively sent these children to die, the PA then embarks on a campaign to use their deaths to attack Israel in the ICC.

The latest PA push in the ICC was exposed following a meeting between the PA Foreign Minister and the ICC prosecutor:

Official PA TV newsreader: “[PA] Minister of Foreign Affairs and Expatriates Riyad Al-Malki gave International Criminal Court (ICC) General Prosecutor Karim Khan a document on Israel’s severe crimes against the Palestinian children, in accordance with his intent to publish a policy paper regarding crimes that are being committed against children. Al-Malki and his accompanying delegation met with the ICC general prosecutor close to the start of the 21st Assembly of States Parties to the Rome Statute –which established the ICC in The Hague — that will last until Dec. 10 [2022].”

The official PA daily added that the PA campaign was “in the shadow of a bloodier year as a result of the Israeli colonialist occupation’s actions.”

While the PA’s sinister use of the death of the kids it sent to die is not surprising, it would appear that the ICC prosecutor seems to be falling into the trap laid by the PA. According to the PA daily report, following the meeting, the ICC prosecutor “emphasized” that “he is giving priority” to investigating the PA claims and intends to visit “Palestine” in 2023:

As PMW has noted, the former ICC prosecutor met on scores of occasions with PA officials, including a PA established committee that represents internationally-designated terror organizations such as Hamas and the Popular Front for the Liberation of Palestine. The relationship between the ICC prosecutor and the PA was so close that the prosecutor ignored the fact that the PA intentionally submitted a falsified document to the court, and even secretly informed the PA of her intention to open an official investigation, merely asking that the PA temporarily keep the decision secret.

Despite the fact that the close relationship between the PA and the office of the ICC prosecutor called into question both the independence and neutrality of the former prosecutor, it would appear that the new prosecutor is continuing the inappropriate behavior.

Also interesting to note was Al-Malki’s remark that the PA continues to cooperate with the ICC and is actively supporting the ICC investigation:

As PMW has already demonstrated, if the PA is actively supporting an ICC investigation, the PA is prevented by law from receiving any US aid.

Lt. Col. (res.) Maurice Hirsch, Adv. is the Head of Legal Strategies for Palestinian Media Watch, where a version of this article first appeared.