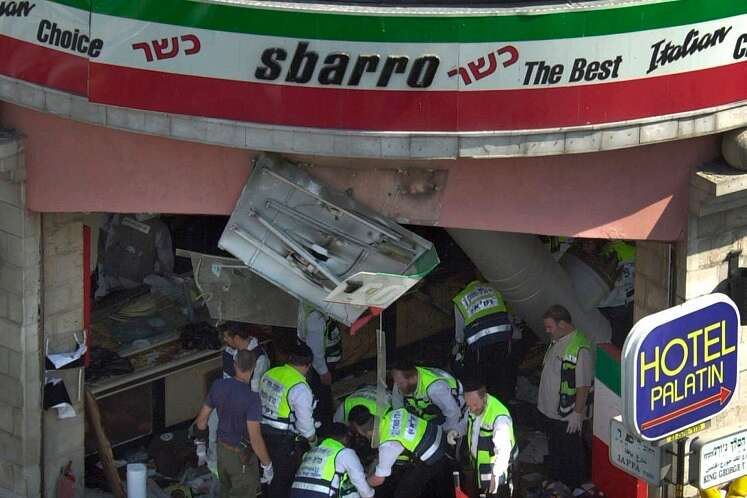 Police and medics at the scene of a suicide attack at Sbarro restaurant in downtown Jerusalem, August 9, 2001 | Photo: AP/Peter Dejong

The terrorists behind the suicide bombing at a Sbarro pizzeria 18 years ago have received $910,823 from the Palestinian Authority, according to a Palestinian Media Watch report released on Thursday.

The bombing in downtown Jerusalem killed 15 people, including two Americans, and wounded around 130 others.

The family of the suicide bomber behind the August 9, 2001, attack, Izz Al-Din Al-Masri, has been one of the recipients of PA rewards.

According to the report, Al-Masri’s family has received $53,689 overall, while the bombmaker, Abdullah Barghouti, has collected $213,848.

Ahlam Tamimi, who planned the attack, has shown no remorse, saying that she has “no regrets.”

Tamimi had been awarded $51,836 until she was released from prison as part of a 2011 prisoner exchange that included Israeli soldier Gilad Schalit’s release from Hamas captivity, when she then escaped to Jordan.

Tamimi is on America’s Most Wanted Terrorist list, but the United States has been unable to secure her extradition as a 1995 extradition agreement was not ratified by Jordan’s government.

The Palestinian Authority allots $7,321 monthly to the Sbarro terrorists and their families, per the report.