Jewish Life in Poland Before the Holocaust

Facing History and Ourselves 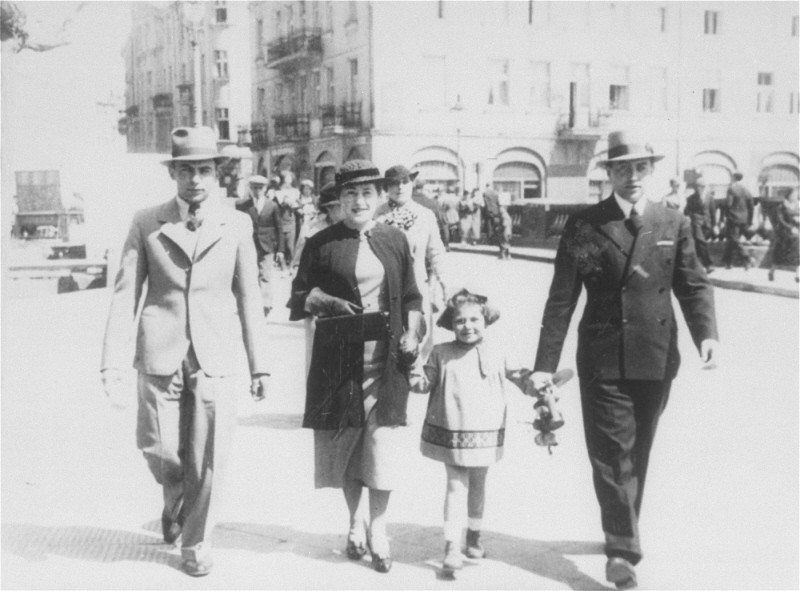 Before the Holocaust, Jews were the largest minority in Poland. In Poland’s major cities, Jews and Poles spoke each other’s languages and interacted in markets and on the streets. Even the market towns, or shtetls, that have come to represent the lives of Jews in Eastern Europe were, to some extent, mixed communities. That did not mean that antisemitism did not impact the lives of Polish Jews, but Jews were part of Poland, and Polish culture was, in part, Jewish.

When the Nazis set their sights on Poland, they sought to destroy all that was there and build it up again as a colonial homeland for Germans. In the process, the Nazis situated their major killing centers there, organizing a railway that took Jews and other prisoners from their homelands to be murdered in occupied Poland. Before liberation in 1945, nearly five million Poles died—including three million Jews and 1.9 million non-Jewish Polish citizens. The Poland that emerged from the war, as evidenced by postwar attacks on Jewish survivors, lacked the diversity that had been essential to Polish culture on the eve of the Second World War.

Jews had been living in Poland since at least the Middle Ages. When Crusaders moved through Europe in the thirteenth century, Jewish refugees sought safety in Poland. The 1264 Statute of Kalisz created legal protections for Jews that were extended by King Kazimierz Wielki, or Casimir the Great, in the early fourteenth century. With these protections, Jewish communities in Poland began to thrive. Scholars suggest that by the sixteenth century, 80 percent of all Jews worldwide lived in Poland, where they enjoyed relative autonomy and tolerance and developed a rich social and cultural life, including several significant Jewish religious movements, such as the Hasidim (a sect of Judaism with an emphasis on mysticism and prayer) and a Jewish reformation movement called the Haskalah.

The relatively peaceful existence of Polish Jewry was threatened toward the end of the eighteenth century when, in a series of diplomatic moves, Poland was partitioned between Russia, Prussia, and Austria. With Russia in control of vast areas of Poland, most Polish Jews found themselves living under Russian rule. Russia imposed geographic and professional restrictions on Jewish life, confining Jews to the Pale of Settlement (which was abolished legally in 1917, though this region continued to house the majority of European Jewry). In response, Jews fought alongside Polish fighters seeking independence during a series of uprisings throughout the nineteenth century.

Except for a small minority of well-off Jewish merchants, bankers, and factory owners, the majority of the Jews were poor and became even more so under Russia’s control. They made a living as traders, as semi-skilled craftsmen in old and emerging industries (textiles, for example), and as shopkeepers. Few were farmers; many were destitute. For the most part, Jews lived in small towns known as shtetls. In tandem with cultural and intellectual changes, once the processes of industrialization and urbanization were under way, most Jews left the shtetl to live in larger urban centers such as Warsaw, Vilna, Krakow, and Lodz. By the 1920s, they made up between a quarter and half of the population in Poland’s larger cities (in some smaller towns, they made as much as 90 percent).

Those cities became the cultural, religious, and intellectual centers of world Jewry. There, Jews developed an extensive network of cultural and literary institutions and charities. Alongside competing religious trends, new political theories and ideologies gripped Polish Jews, including Zionism and socialism. These ideas and many others were discussed in thousands of newspapers, books, journals, and plays, written mostly in Yiddish.

In the 1880s and 1890s, after the assassination of Russian Tsar Alexander II, Russian-Polish Jews were exposed to a series of organized massacres targeting Jewish communities called pogroms. In response, some two million Jews emigrated out of this region, with the vast majority going the United States. Others responded with different solutions. Some Orthodox Jews, who looked to protect Judaism, tried their best to isolate themselves from hostility and outside forces. Zionists promoted the idea of mass migration to Palestine, while socialist Bundists sought to unite all the Jews in Eastern Europe in a class-based fight for economic reform. Others believed that assimilation (or acculturation) into mainstream culture was the proper response.

After World War I, Poland became a democratic independent state with significant minority populations, including Ukrainians, Jews, Belorussians, Lithuanians, and ethnic Germans. However, increasing Polish nationalism made Poland a hostile place for many Jews. A series of pogroms and discriminatory laws were signs of growing antisemitism, while fewer and fewer opportunities to emigrate were available. One the eve of World War II, three and a half million Jews, or about ten percent of the population, lived in Poland, giving it the highest percentage of Jews in any European country.