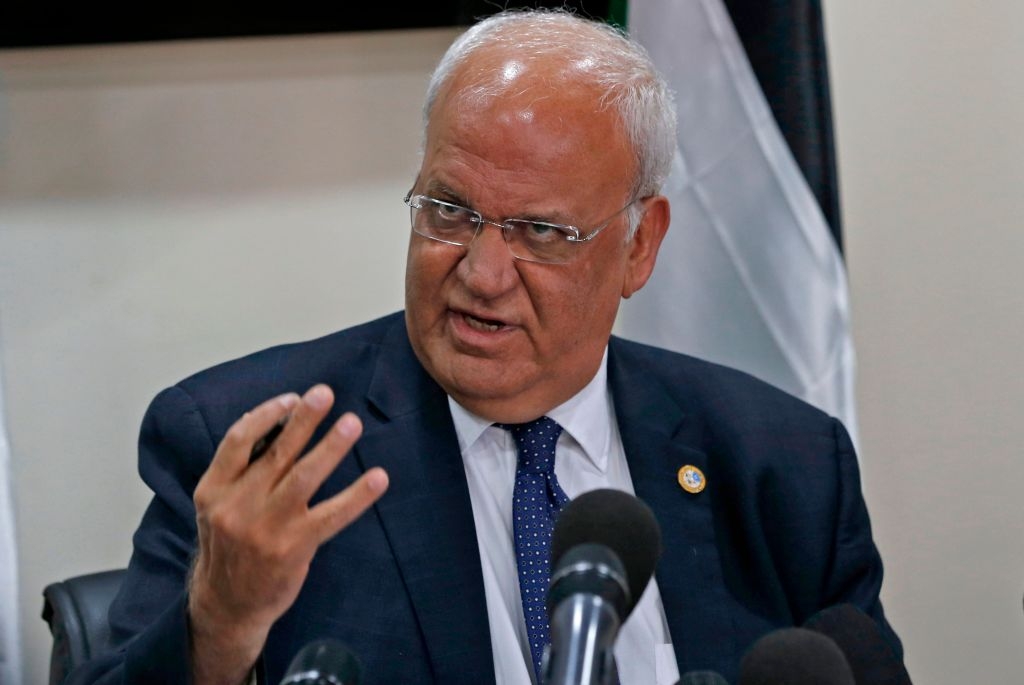 Ahmed Erekat, a 26-year-old Palestinian from the village of Abu Dis, south of Jerusalem, was shot dead by Israeli soldiers on June 23 after ramming his car into an Israeli military checkpoint. One soldier was lightly wounded in the attack.

Footage released by the Israeli authorities leaves no room for doubt that Erekat was on a mission to kill soldiers. The footage shows Erekat deliberately turning his car as he waited in line, driving directly at the soldiers, hitting one female soldier and then crashing into a guard booth. Erekat then got out of the vehicle and started walking towards the soldiers, who fired a number of bullets at him, killing him instantly.

Such terrorist attacks are not uncommon in the West Bank, where Palestinian terrorists have carried out dozens of car-rammings against Israeli soldiers and civilians in the past few years.

This attack, however, caught the attention of the international media because the terrorist happens to be a relative of Saeb Erekat, the former Palestinian chief negotiator with Israel who currently serves as secretary general of the PLO.

Since the car-ramming, Saeb Erekat has been waging a campaign of incitement and lies against Israel. He has accused it of “cold-blooded murder” and now of the “extrajudicial execution” of his cousin.

The senior PLO official is deliberately ignoring the video that clearly shows his cousin using his car in an attempt to kill Israeli soldiers. He is also, perhaps not surprisingly, ignoring the testimonies of the soldiers his cousin tried to kill.

Shani Orr Hama Kados, the soldier struck in the attack, told Israel’s Channel 13 that “he looked me in the eye, turned the steering wheel and rammed into me.”

Saeb Erekat’s ranting over the death of his terrorist relative has attracted the attention of many Israel-haters around the world, some of whom have been repeating the PLO official’s libels and lies.

One of them is Nihad Awad, co-founder and Executive Director of the Council on American-Islamic Relations (CAIR). Both Awad and CAIR were part of a Muslim Brotherhood-run Hamas support network in the US.

“Israel has murdered thousands of Palestinians,” Awad claimed in a June 23 post on Twitter. “Total silence and unwavering support is our [US] government’s response.”

Awad was responding to a Twitter post by Noura Erekat, another relative of the terrorist, who describes herself as a “human rights attorney and assistant professor at Rutgers University.”

“Israeli soldiers shot to kill my baby cousin, Ahmed,” she wrote. “Israeli cowards claim it was a car ramming incident – he was on his way to pick up his sister from the salon for her wedding tonight!”

The “human rights attorney” made her false accusation before the Israeli authorities released the video that proves that her cousin had planned to carry out a terrorist attack. Yet like her other relative, Saeb Erekat, Noura Erekat refuses to accept the fact that her “baby cousin” was a bloodthirsty terrorist.

As a former “chief negotiator” with Israel, Saeb Erekat is seen by many Palestinians as a veteran diplomat and politician. As such, one would expect him to be more cautious and restrained when it comes to making serious accusations about any party, particularly Israel.

Saeb Erekat’s record, however, shows that this was not the first time that he had made a false accusation against Israel.

In an interview with CNN on April 10, 2002, Saeb Erekat falsely claimed that Israeli troops had killed “more than 500 people” during a counter-terrorist operation in the West Bank city of Jenin. Two days later, he repeated the charge on CNN: “A real massacre was committed in the Jenin refugee camp.” He added that 300 Palestinians were being buried in mass graves. On April 15, 2002, Erekat continued his charges: “And I stand by the term ‘massacres’ were committed in the refugee camps.”

The Washington Times later commented on the false accusations that Israel had committed a “massacre” in Jenin:

“It is not strange that many Jews have started to suggest the world is seeing a resurgence of anti-Semitism. Take, for instance, the so-called ‘Jenin massacre.’ Remember the screaming headlines and the front-page pictures of devastation as Israeli troops fought their way through the Palestinian refugee camps in early April? Bad as it looked, the evidence is now clear evidence presented to the United Nations, no less that the operation in now justified the accusations of genocide and crimes against humanity that were being flung at Israel. There was no mass murder of Palestinian civilians at Jenin.”

Has Saeb Erekat since apologized or retracted his false accusation? No. Not only has Erekat failed to apologize for his fabrications, but he has continued to spread more lies about Israel. One of Erekat’s famous lies: “Israel has effectively interfered with and changed the status quo of Christian and Muslim prayer sites and institutions in Occupied East Jerusalem.”

“Exactly the opposite is true, given Israel’s scrupulous respect for the existing religious practices in Jerusalem, ” commented Dr. Eran Lerman, former deputy for foreign policy and international affairs at the National Security Council in the Israeli Prime Minister’s Office, on Erekat’s lie.

“Here Erekat’s shameless campaign of lies, apparently aimed at journalists who will not bother to check the verbiage they are fed, reached new heights. No respect is paid to the Jewish heritage and patrimony on the Temple Mount. Nor has such respect been evidenced on the Mount, where the [Islamic] Waqf has deliberately destroyed archeological evidence of the ancient Jewish temples.”

Lerman, commenting on a document published in 2015 by the PLO official’s “Negotiations Affairs Department,” concluded:

“Saeb Erekat is a unique phenomenon in the Palestinian orbit. For years, he has played the dual role of negotiator-in-chief for Palestinian-Israeli peace talks and propaganda par excellence for the regimes of Yasser Arafat and Mahmoud Abbas. His record of lies and dissimulations is legion, and seems to be getting worse as he ages. History will yet record his abysmal diplomatic role in the many mistakes of the Palestinian national movement.”

Erekat is now using the killing of his relative to step up his incitement and spread more lies about Israel. He is now demanding that Israel unconditionally hand over the terrorist’s body to his family. He wants the body so that the family would be able to honor the terrorist by holding a large funeral for him. The former Palestinian “chief negotiator” would, apparently, love to attend the funeral of the terrorist together with Palestinians chanting “Death to Israel.”

Erekat is demanding that Israel release the body of a terrorist, while ignoring that his Hamas brothers in the Gaza Strip have been holding the remains of Israeli soldiers Oron Shaul and Hadar Goldin since 2014. Erekat does not care that the families of the Israeli soldiers have not been able to bury their beloved ones. He is more concerned about the body of a terrorist than about the ongoing suffering of the families of Shaul and Goldin.

As a veteran negotiator, it would be a good idea for him to use his experience to persuade the Hamas terrorists to release the remains of the two soldiers instead of waging a propaganda campaign on behalf of a terrorist who woke up one morning and decided to kill Jews.

With negotiators like Erekat, one can understand why the Israeli-Palestinian peace process has been stalled for so many years.

Bassam Tawil, a Muslim Arab, is based in the Middle East.