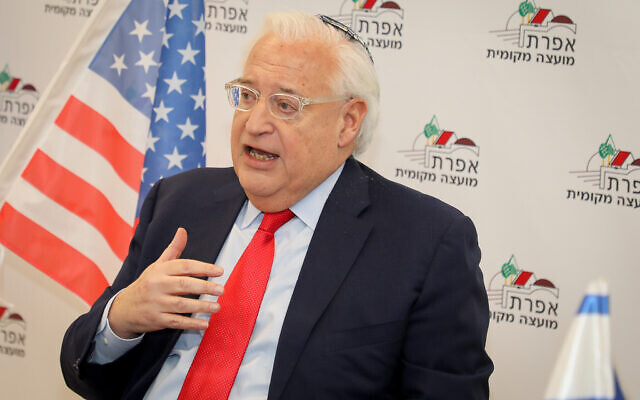 US ambassador to Israel David Friedman during a visit in the Jewish settlement of Efrat, in Gush Etzion, February 20, 2020. (Gershon Elinson/Flash90)

US Ambassador to Israel David Friedman on Wednesday said it would likely take six to seven years before the United Arab Emirates receives the F-35 stealth fighter jet, under a contentious proposed arms sale that has raised concerns in Israel over its potential to damage the country’s military edge in the region.

“The Emiratis have been trying to get the F-35 for six or seven years. The delivery time is probably another six or seven years from now, if they got [approval to purchase the aircraft],” Friedman said in an interview during the Jerusalem Post newspaper’s conference.

Though not formally a part of a recently signed US-brokered normalization agreement between Israel and the UAE, the sale of the F-35s is widely seen as having been contingent upon Abu Dhabi’s acceptance of the deal with Jerusalem.

Under a 2008 law and a decades-older policy, the United States is prohibited from making arms sales to countries in the Middle East if the Pentagon determines that doing so would damage Israel’s so-called “Qualitative Military Edge.”

The US ambassador seemed to criticize Israeli officials who initially spoke out against or expressed hesitations about the proposed sale of the fifth-generation aircraft, a linchpin in Israel’s aerial superiority strategy. Though he was not explicitly named, this appeared to include Defense Minister Benny Gantz, who said last month that the proliferation of the advanced stealth fighter jet through the region was “not good for Israel.”

“It’s not in Israel’s interest to discuss what they’re afraid of or what they want or what they should get,” Friedman said.

Though Prime Minister Benjamin Netanyahu has repeatedly denied giving his approval for the F-35 sale, he appears to have at least been made aware of it in advance and not informed the Defense Ministry and military that the sale — until then regarded as indefinitely on hold — appeared to be going through.

Friedman criticized efforts to make the sale into a “political issue” and said the matter would be resolved by defense officials from both countries.

“Israel has dealt with the QME behind the scenes, professionally, outside of politics, successfully for more than a decade. It’s going to continue to work that way,” he said.

On Tuesday, Gantz — who was kept out of the loop about the UAE normalization deal and the F-35 sale — met with his American counterpart Mark Esper and other defense officials to discuss ways of maintaining Israel’s advantage in the region.

“The professionals are engaged right now. Let them engage, let them continue to engage, and we’ll get to the right outcome,” Friedman said.

In some cases, weapons sales that would have threatened Israel’s QME were eventually allowed to go through provided the United States offset the potential harm by limiting the way the equipment could be used by the other country or by selling yet more powerful military technology to Israel. For example, under president Barack Obama, F-16 fighter jets were sold to Saudi Arabia under the condition that they could not be based within immediate range of Israel.

Friedman appeared to indicate such a deal would be reached in this case as well.

“There are so many ways to skin this cat,” he said.

According to a Reuters report Tuesday, the US is hoping to ink a deal to sell the stealth fighters to the UAE by December, but is also looking for ways to assuage Israel’s concerns that its security could be jeopardized by the sale of the advanced jets.

The report claimed one measure under review was supplying Israel with technology to identify the Emirati jets, so the stealth craft cannot evade its radars.

Gantz met with Esper and other senior US officials during his visit to Washington on Tuesday, a week after Israel normalized relations with the UAE and Bahrain at a White House ceremony. Gantz did not travel to the US for the signing of the accords.

“The defense relationship between the United States and Israel has never been stronger: We intend to keep it that way,” Esper told Gantz, according to the Pentagon.

He added that “a cornerstone of our defense relationship is preserving Israel’s qualitative military edge in the region.”

Gantz and Esper “discussed the importance of ensuring Israel’s military edge and the avenues to maintain it and reviewed additional regional opportunities and potential defense collaborations,” the Israeli Defense Ministry said in a statement.

The defense minister also discussed the sale of the planes with senior US presidential adviser Jared Kushner, a key architect of the normalization deals with the UAE and Bahrain.

Gantz and Kushner discussed “furthering additional accords as an instrument for ensuring regional stability and protecting Israel’s security, while maintaining Israel’s qualitative edge throughout the process,” the Defense Ministry said in a statement.

There was no comment on the meeting from the White House.

Times of Israel staff contributed to this report