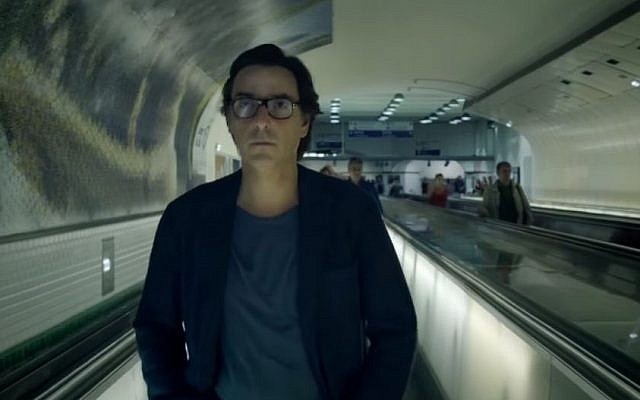 French actor and director Yvan Attal in the film ‘They are everywhere,’ which deals with anti-Semitism in France (YouTube screenshot)

CANNES, France — Actress Charlotte Gainsbourg is to star in a provocative new comedy that parodies deep-rooted anti-Semitism in France, its director said Thursday.

“The Jews” — titled “They are everywhere” in French — is being shot by Gainsbourg’s partner, the actor and director Yvan Attal, who starred in Steven Spielberg’s film “Munich” about the massacre of Israeli athletes at the Olympics in 1972.

The satire follows a Jewish man, played by Attal, forced into therapy by growing anti-Jewish feeling around him in France, a spokeswoman for Wild Bunch films told AFP.

His time on the couch is cut with tragicomic episodes showing what the producers called “anti-Semitic stereotypes” that endure in France.

“The film is not about Jews — it is about anti-Semitism,” said Israeli-born Attal.

He said he himself had frequently encountered anti-Semitism in France. “I was called a ‘dirty Jew’ at school and later I have come up against different kinds of anti-Semitism which marked me out as Jewish,” he added.

“Most of all it is because of the Israel-Palestinian conflict. People say, ‘You give us such trouble.’ And I say to them, ‘Who is the ‘you’?’

“But it is the use of the ‘we’ that worries me most,” he said, because it sets Jews apart.

The film — which will premiere in the autumn — also features a roll call of major French stars including Dany Boon, Denis Podalydes and Gilles Lellouche, as well as Belgium’s Benoit Poelvoorde.

French Jewish groups and the Israeli government have repeatedly sounded the alarm in recent years about growing anti-Semitism in France, home to Europe’s biggest Jewish community.
recomended by: Leon Rozenbaum

A French-born jihadist who had pledged loyalty to the Islamic State group killed four Jewish hostages during a siege of a kosher supermarket in Paris two days after the Charlie Hebdo attacks in the city last year.

More than 850 complaints of attacks of an anti-Semitic nature were logged by French police in 2014, with that number dropping back only slightly to 806 last year.

Israeli Prime Minister Benjamin Netanyahu has frequently denounced what he called “poisonous” anti-Israeli propaganda in France and elsewhere in the West, singling out the country again earlier this month for criticism in a speech at the Yad Vashem Holocaust Remembrance Center in Jerusalem.