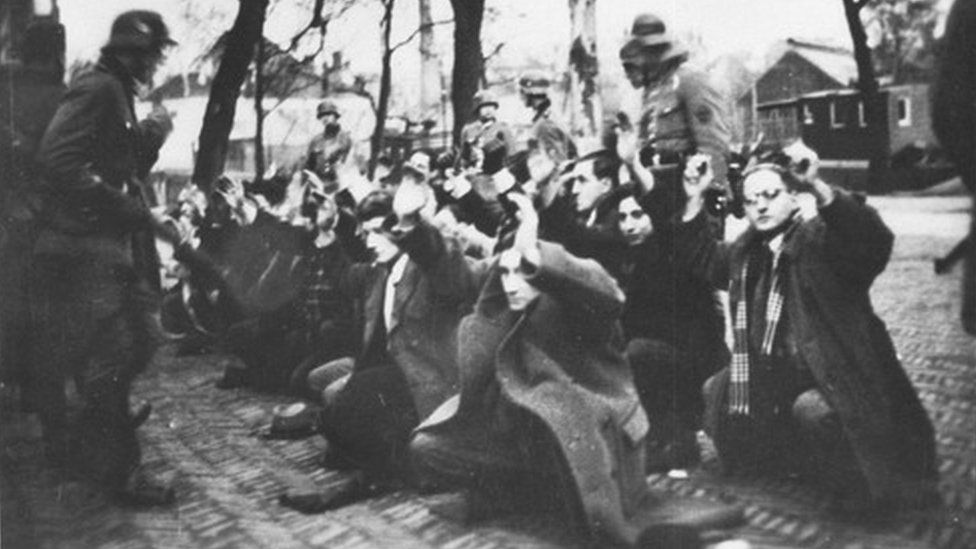 Over 100 Dutchmen were sent to their deaths at a secret Nazi gas chamber in 1941, a year before Nazis began mass deportations of Jews to gas chambers.

The men were seized in Amsterdam in the Netherlands in February 1941, in the first Nazi raids on Jews in Western Europe, and sent to Mauthausen concentration camp in Austria.

Historian Wally de Lang says 108 were murdered at the nearby Hartheim Castle.

They were given fictitious causes of death, she explains.

Germany invaded the Netherlands in May 1940 and over the next five years more than three-quarters of the Jewish population were murdered, with deportations to the extermination camp at Auschwitz beginning in July 1942.

The large-scale round-up, or razzia, of Jews began on 22 and 23 February 1941 in revenge for the killing of a Dutch Nazi collaborator during a clash. Pictures of that initial raid are widely known but not what happened to the hundreds of traders, salesmen, tailors and other Amsterdam residents who were arrested. 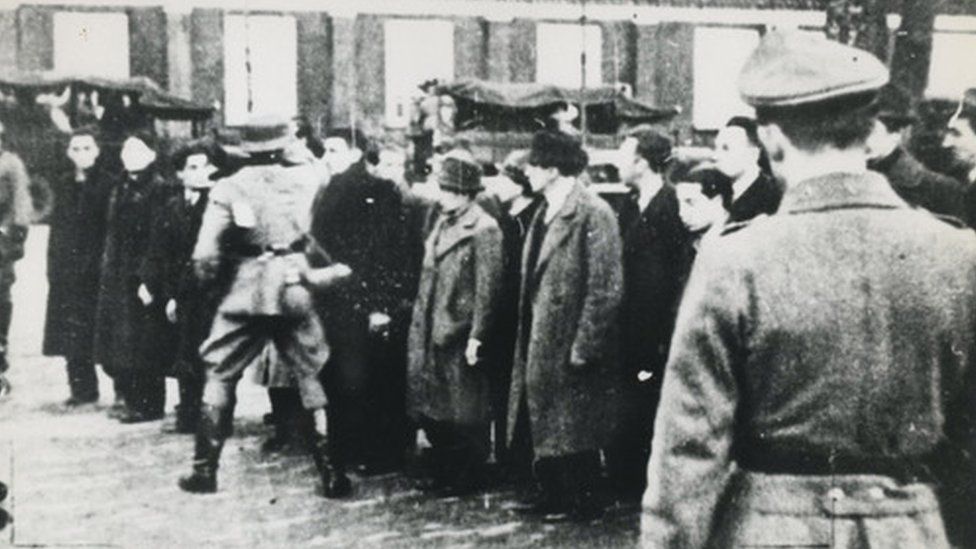 De Lang has detailed in a new book who the men were and what happened to them after they were taken to Camp Schoorl, a prison camp in the Dutch dunes: 388 were sent to the Nazi concentration camp at Buchenwald in Germany. “We always thought the first deportation train departed in July 1942, [but] these razzia men were already deported on 27 February 1941, so that’s much earlier,” she told the BBC.

Killing centre at Hartheim
Dozens died within weeks in the quarries of Buchenwald and then on 22 May 1941 the remaining 340 were sent south to Mauthausen concentration camp, 35km (21 miles) from the castle at Hartheim.

In 1940 the castle had been turned into a killing centre, where 30,000 people with physical disabilities and mental illnesses were murdered until a public outcry brought the campaign to a halt. From 1941 it was then used to murder 12,000 prisoners under the programme “Action 14f13” – a Nazi campaign to murder concentration camp prisoners no longer able to work. Spanish and Polish prisoners were also murdered there.

De Lang said there were two ways that the Nazis used gas there: “During the bus ride, halfway to the castle, and then at Hartheim there was a kind of place where no-one could see what was going on.”

‘Laboratory for the Nazis’
What was not known was that many of the Dutch prisoners were killed in the Hartheim gas chamber. Families were given false causes of death and it was widely assumed the men had died of lead poisoning in the mines.

De Lang says they were sent to Hartheim and murdered on 11-14 August but given false causes of death for weeks later.

For 108 of the prisoners there is evidence that they were murdered and cremated at Hartheim, she says, but it was very likely the case for dozens more as well.

She discovered in German archives that from 1-6 September 1941 up to 30 prisoners were listed alphabetically as having died each day. At the time, all deaths had to be registered and the historian is convinced that they were murdered on arrival weeks before.

“It was a kind of laboratory [for the Nazis] to improve their knowledge of everything that we see at Auschwitz on a much, much bigger scale.”

It was not until January 1942 that Hitler and other Nazi leaders came up with the genocidal “Final Solution”.

As part of De Lang’s research, she has identified a number of people pictured during the Nazi detentions in Amsterdam. John Spel, the grandson of one of those seized, Aron Smeer, said that for years all he had was a name, and now he had a face too. “It leaves you speechless,” he told public broadcaster NOS.