I Escape From Ukraine, to a Caucasian Mountain Film Festival

Taking a break from heavy artillery to watch mountaineering-themed movies in the high peaks of Georgia. 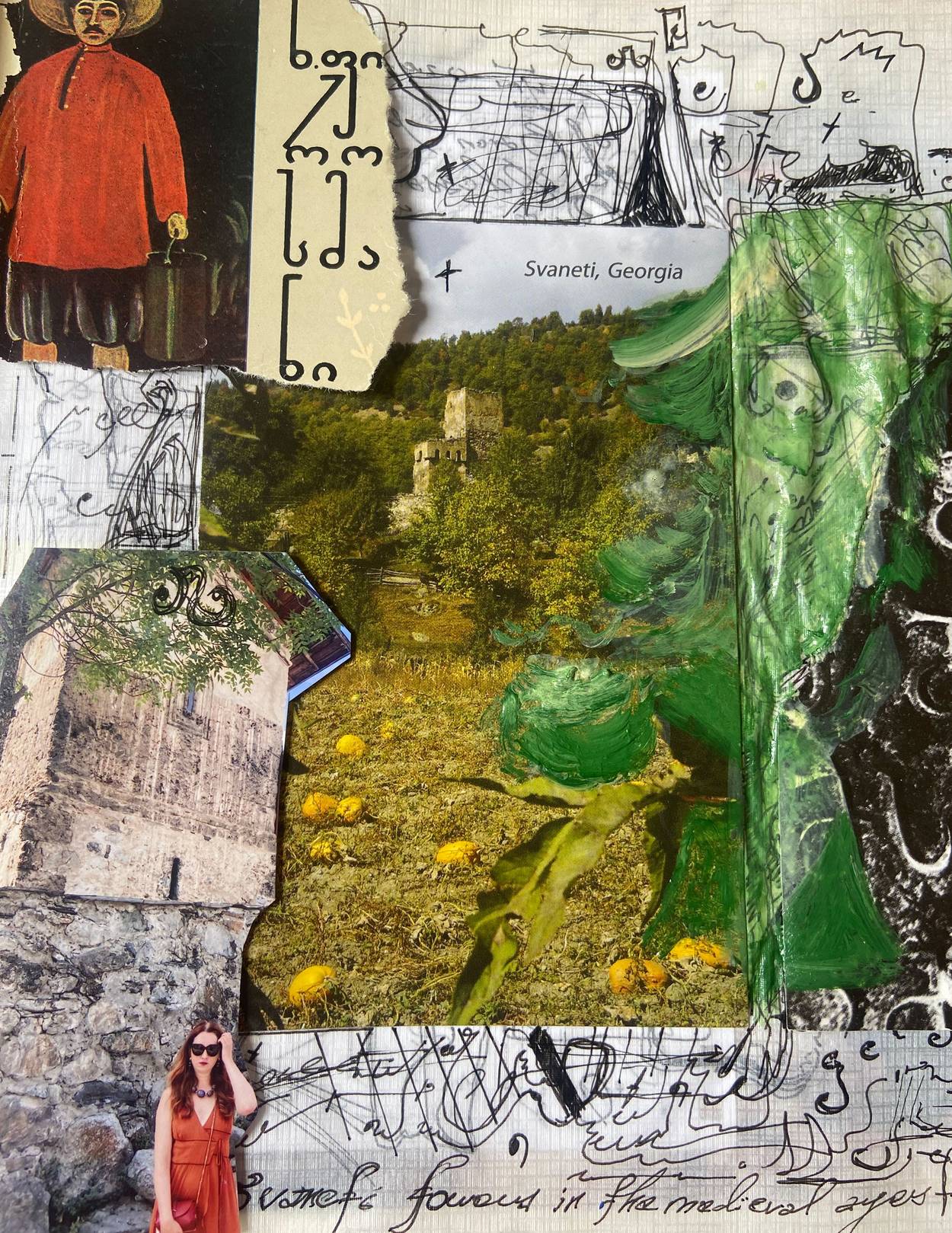 A collage from the author’s visual diaryCOURTESY THE AUTHOR

On the cusp of burnout after months covering the war in Ukraine and helping my relatives get out of the country, I was ready for a break. In southern Ukraine I observed Russian artillery set Ukrainian grain fields ablaze, and Ukrainian babushkas—each one a visceral reminder of my own grandmother—queuing for hours at a time for potable water. The car that I was driving in with a Ukrainian general was strafed by sniper fire. My Ukrainian hometown port of Odessa was under Russian siege. Under those circumstances, a trip to the northern tip of the Caucasus Mountains to attend the Mestia International Short and Mountain Film Festival seemed tremendously appealing. Never having attended a mountain-themed film festival before, I had little idea of what to expect. Frankly, I would have gone anywhere without shelling.

What was most striking upon landing in Tbilisi after a yearlong absence were the palpable aftershocks that the Russian invasion of Ukraine has wrought upon Georgia. Like Ukraine, Georgia has also had a chunk of its territory occupied by the Russian army, and continues to live with the trauma of the 2008 war which the world chose to mostly ignore, thus emboldening the Kremlin to wage the next one. Ukrainian flags, posters, and banners are proudly displayed everywhere throughout the Georgian capital.

The effects that the Russian war has wrought on the tiny nation’s demographics are also nothing short of astounding. Being one of very few places where Russians can still land sans visa, Georgia has become a platform of choice for fleeing Russians. After Feb. 24, an estimated 400,000 Russian citizens have arrived or passed through this country of about 4 million. While many of these temporary denizens and refugees are members of the Russian liberal intellegentsia fleeing repression (the wine bars are full of the kinds of Muscovites who work in media) many others are not. Some have misbehaved, abusing the famed Georgian hospitality, and others are suspected by the Georgian security services of being spies or saboteurs.

Not everyone here is happy to be inundated by a veritable sea of Russians. “They are literally everywhere,” a Georgian acquaintance complained to me, adding: “They also often behave very badly and perhaps our government should not have allowed so many of them into the country.” A group of local Georgian activists in the capital was reported to be affixing stickers with the slogan “Russia Is an Occupier” to the trunks of vehicles bearing Russian license plates. Graffiti all over the capital demanded that “Russians go home.” My Ukrainian wife, who is from a Russian-speaking family but is perfectly fluent in Ukrainian, refused on general principle to interact with Russians in local restaurants and in hotel lobbies. She would shame and disquiet them with long stares from over her Jackie Onassis-style shades.

“Must you glare at them like that?” I inquired of her. “Yes. I must,” she retorted. “I have nothing to discuss with citizens of a country that is killing my countrymen and raping my countrywomen. Many, if not most, Russians are complicit in the bombing of my country, and as I do not know who is who, I will simply ignore all of them.” The next morning, seeing a couple of annoying Russian hipsters seated at the communal table of the hotel breakfast room, she began reading newly published statistics of Ukrainian kids kidnaped by the Russian army from occupied territories. The Russian hipsters turned tail and fled after about four minutes of this abuse.

Having vanquished the Russian hipster-occupiers, we piled into a spacious red minibus along with the rest of the festival guests and journalists and set off for the long mountainous drive to the northern Svaneti region. The Upper Svaneti region of Georgia is splendidly isolated while also paradoxically having played a central role in international trade routes over the centuries. The vistas on the way are breathtaking and the ancient kingdom of Colchis—where the adventures of Jason and the Argonauts took place—was here. The region was also home to Balkan-style clan warfare, honor killing and bride kidnappings that lasted through the start of the 20th century in medieval villages dotted with outcroppings of UNESCO heritage-listed, 25-meter-tall rock towers, erected a thousand years ago to protect the villages from raids.

The town of Mestia is bisected by the Enguri river, and one can still get stuck in traffic behind some cows as they are being taken home from pasture late in the evening. The hills surrounding the village are sheathed in verdant cedar and fir trees that intrepid German weirdos arrive to collect for use as Christmas trees back home. Watching a series of films about mountains and mountaineering while being surrounded by some of the most luscious nature on the planet and staring up at the frosted peaks of the Caucasus Mountains—dear reader, the experience contains more than a hint of nature worship.

Thus, a self-exculpatory confession: I myself was never much of a sporting fellow or worshipper of the great outdoors, and as a result I possess only a limited understanding of the Alpinist and mountaineering genres. If, however, Alpinism, skiing and mountaineering are your life’s passions, Mestia is surely the film festival for you. A delightful and relaxed event, with traditional Georgian dancing, barbecuing, and existentialist-themed films about mountains that would make a Beckett or an Ionescou happy, plus lots of excellent Georgian wine. What more does one need in life?

The opening festival film—No Man’s Land, from the legendary German-speaking Italian mountaineer and writer Reinhold Messner, who now seems to be coasting on his reputation—is a treacly and overwrought work of made-for-TV myth-making, a charmingly bad and incoherent work of nostalgia for the mountaineering tradition of the German-speaking Italian region of South Tyrol. “German and romantic nostalgia—it seems to me as an Indian, these do not go together very well,” a perceptive Indian film critic quipped to me as we were leaving the screening. Over the course of the next few days, we would also learn that the Italian variant of the existentialist worship of nature often comes wrapped in a particularly abstruse and peculiar poeticism—Walt Whitman mixed with Giorgio Agamben.

Yet despite the inherent tension and implicit drama of man confronting his limits and that of nature by throwing himself against a giant huge mountain, it is paradoxically difficult to keep a narrative going in this genre. As a result, many of the films at the festival were ethnographic in nature, or else poised somewhere on the register between National Geographic travelogue and a secondary outtake from a scholarly anthropological journal. A formalist study of the truly hardscrabble lives of Nepalese iron miners would go on to win a festival prize.

Outside of ecological, ethnographic, or martial virtues, the central aesthetic concern of films dealing with mountaineering themes is fundamentally the same as the depiction of other sensuous experiences, which are fundamentally private. It is fundamentally not easy to telegraph certain kinds of pleasures through the semiotics of the image. While piety is the natural impulse in relation to depicting the primordial sense of awe that envelops one on top of a large mountain, the attempt to depict the impulse to grandeur either works on screen or it simply does not. Occasionally, when there is a proper narrative to frame the adventure, the outcome can be very funny, as is the case with Ivan Dunsmore’s short film The Mad Belgian: Keep Walking. The mad Belgian of the title is an avid mountaineer who is kept from mountaineering by coronavirus pandemic restrictions, and is thus forced to concoct a Covidian substitute adventure. He decides to climb a steep staircase in his hometown of Liege 135 times—a distance equal to having hiked to the peak of Mount Everest.

Unsurprisingly, the effects of COVID on the bodies and spirits of the highly intrepid is a major theme of current nature films. Individuals who climb mountains simply because they are there appear prone to also be those whose psyches are most damaged by prolonged COVID-related confinement.

The bespectacled and slim Jaewon Sheol of Cultura magazine is a penetrating Korean film critic whom I spent time with at the festival. He explained to me why he chose to attend Mestia: “Regional film festivals are always fascinating, and in this post-COVID time, I was interested in the ways that a thematic festival might develop,” he told me. It was the gentleman’s first time in the Caucasus and he had not yet adjusted to the quirks of Caucasian timekeeping. “Still, everything is very fluid and very charming! he informed me. The other journalists on the bus with us were an Indian Muslim, an affable British Egyptian lady who had burned out on political writing after the collapse of the Arab Spring, a Turkish fellow, and my Jewish wife. Sheol was both happy and amused to be the only member of our party of Jews and Muslims to have no meat-based dietary restrictions. He informed me that he was enjoying Georgia’s largely pork-based cuisine immensely.

Screening out of festival competition was Namme, by Zaza Khalvash—a wonderful Georgian film director who sadly passed away two years ago in his early 60s. The mystically inclined tale follows the relationship of Namme with her patriarchal father, Ali. The family business is tending to a sacred fish which grants members of the family magical healing powers. She is forced to take on the traditional role of healer as her three older brothers are not interested in following the path of paganism, family business or not. Instead, they convert to other ideologies—one is a Georgian Orthodox Priest, another a Muslim, and the third a bespectacled teacher of Marxist materialism with a single student. Festival Director Khatuna Khundadze pronounced the film to be “perhaps the best piece of Georgian cinema of the last two decades,” and she is likely correct.

Though smaller regional film festivals often have a difficult time getting access to first-rate films, Berg by the Dutch filmmaker Joke Olthaar would have been every bit as visually impressive if had it premiered in Venice or Berlin. Berg (the German word for mountain) follows the adventures of three hikers connected by their own personal quests as they meander through the Slovenian Triglav mountain range.

It would not ruin the plot to say that nothing much happens during the course of the black-and-white film, which won the Grand Prix of the festival. Berg simply succeeds where other similarly themed films fail, as a gorgeous and formalist meditation on exploration and adventure. Having been prepared for the film and knowing exactly what to expect I made sure to down almost two entire bottles of Saperivi wine before attending the screening. I had finally made it to the top of the mountain, and here was bliss.

Vladislav Davidzon is Tablet’s European culture correspondent and a Russian-American writer, translator, and critic. He is the Chief Editor of The Odessa Review and a Non-Resident Fellow at the Atlantic Council. He was born in Tashkent, Uzbekistan, and lives in Paris.