It’s Time to Show Up 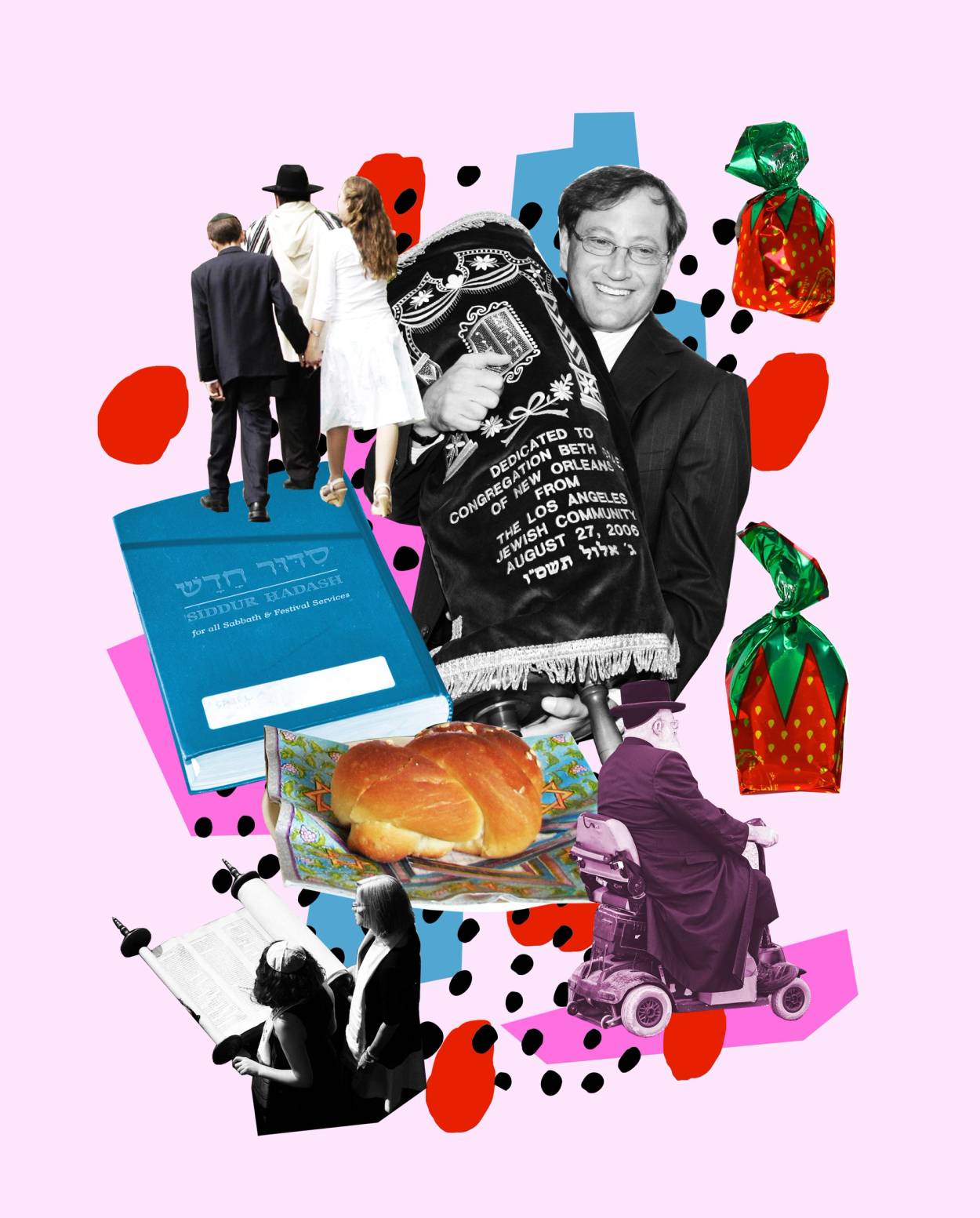 In early October, I had the pleasure of attending my godson David’s bar mitzvah. It took place in a relatively new Reconstructionist synagogue, three days after Yom Kippur, and all said, it was a lovely service. The rabbi, a woman originally from Ukraine, was a warm, welcoming leader who invited David’s father’s Mexican family (who are not Jewish) up to the bimah to actually see the Torah up close, and explained patiently how it was handwritten, what its structure meant, and why it was so special for David to read from it today. The singing, performed by a younger volunteer on guitar and his older cantor mentor, got feet tapping and mouths enthusiastically singing the Mi Chamocha from behind their mandatory masks.

One part of the service stuck out at me, though. Next to the rabbi, there was a giant TV facing the congregation. And on it, throughout the entire thing, were the faces of the dozen or so remote parishioners, watching and davening from the comfort of their own homes. A few times during the service the rabbi asked us to wave to them, or stopped to see if they had a name for Kaddish, and they were told to sing along, clap, and feel as though they were there. The week before, at my own shul’s Rosh Hashanah services, the rabbi had done the same, calling out a special greeting to “those watching from home” as she looked into the cameras like a game-show host, and asked those of us there, in the hard wooden pews, to send them our love.

“How much longer are we going to do this?” I thought to myself, with more spite than I care to admit. “When are these people going to just show up?”

Judaism requires presence. In fact, it commands it. That’s the point of a minyan, a Seder, a Birthright trip, a shiva, summer camp, and everything else we hold dear as Jews. But for two-and-a-half years we allowed people to detach their physical selves from being Jewish. We did it first out of necessity, and a sacrificial sense of mutual safety. In those years, I attended online baby namings, weddings, bat mitzvahs, shivas, and services for every conceivable holiday. I arrayed two laptops at strategic angles by the Seder table, so each side of the family had an equal view. I participated in online Jewish food conferences, streamed Israeli movies from film festivals, and sat at home, alone, watching other Jewish cultural events. I helped my kids attend virtual weekly Jewish school for a few weeks, until it proved too much. I did what I had to do, but the crisis is now over, and here we are, still offering the remote option.

But enough is enough. For those of us who can, it is time to show up.

Why? Because who are we, the Jewish people, if we stop showing up? Are we a race? A set of loosely linked DNA molecules who consume a dairy product shmeared on a gluten product, neither of which we can digest properly? Being Jewish is being there, wherever it is you feel Jewish. To actually go and experience, be with other Jews, face to face, shvitzing in the same JCC steam room together, in a way you can’t just digitize, dial up, or stream through a headset you strap onto your face.

Show up to shul. Trust me, I know you don’t want to go. I don’t want to go. It’s far. The seats are uncomfortable. The service is long. The sermon could be cut in half. But there is also nowhere like it. In that space, you are fully immersed in the sounds and rhythms of the core Jewish tradition. And here’s the thing: It doesn’t matter if you believe in God, know the prayers, or even speak Hebrew. You can read along with fervent devotion, or you can zone out and daydream, and even still, the liturgy will pass through you and leave an impression. There’s a reason why we cannot do this alone. Why we must gather at least nine other Jews to pray. Anyone can read the Torah at home, or say Aleinu in their apartment. But no one stands up and sits down at home. No one sings—I mean really belts out—Avinu Malkeinu in their bedroom, because singing alone (shower excepted) is an empty gesture. The point is gathering together and going through it all as a group, even if you find it boring, or get lost, or nod off partway through.

Show up for each other. To the shiva. And the bris. And the sukkah party of that neighbor you aren’t close with. The entire point is your body being in that space with other bodies. A gathering of the tribe. Break the bread. Take too much lox. Pocket a slice or two of babka. Eat so many latkes you feel genuinely sick. But be sure to console and kibitz, to pull people into corners and gossip, to hold hands and hug, and encourage kids to boo Haman and light the Friday candles. Every year, we used to throw a wild Hanukkah party at our house for all the neighborhood Jewish families we knew. It was a madhouse of kids, grease, booze, and noise, but it built friendships, and relationships, and established the foothold of a local community where before there was none. Community can only be built when we are together in the same homes, making a glorious mess, talking too loud, and being Jewish together. You can’t do that online. Not even close.

Judaism requires presence. In fact, it commands it.

Show up to Israel. Get on a plane and go. Sweat in the dry heat of Jerusalem and the humid noise of Tel Aviv. Hit Masada at dawn. Feel your eczema burn in the Dead Sea. Argue with taxi drivers. Lust after the bronzed soldiers on the beach. Eat all the shawarma. Because if you don’t go, you don’t get to experience how, in the words of Rich Cohen, Israel is real. Not some mythic place in a distant story, or a tidy symbol for flag waving and nationalism, or a political topic you can master if you just read enough articles. No. Israel is a real flesh and blood country, with a geography, beauty, absurdity, and dynamism that’s rife with contradictions, and impossible to simplify. It is a Jewish state, but when you go, you realize that those Jews are wildly different, and there are many other humans (Muslims, Christians, Arabs, Druze) who live there, too, in harmony, conflict, and everything in between. But if you don’t show up, you won’t actually see that with your eyes, and gain an understanding of Israel beyond the coloring book you were given in Hebrew school.

Show up at the deli. Stand at the doorway and try to get the host’s attention. Kvetch about the wait, while the smell of rendered chicken fat and steaming pastrami fills your lungs and blankets your hair in a fine mist. Have a seat in a cracked vinyl booth with your oldest friend. Shout over to your old Hebrew school classmate at the table behind you. Joke. Order. Kibitz with the waiter. Kvetch about the corned beef being too dry (or too fatty). Eat. Fart. Sure, you could have the sandwich and soup, coleslaw and knish delivered to your house, with five taps of your GrubHub app … but if you do, you’ll miss out on everything that happens around the food, which is what makes the deli (or the bagel shop, bakery, falafel joint, or even kosher sushi restaurant) one of those great Jewish cultural spaces open to everyone. Just go. Stand on the sidewalk outside Russ & Daughters for three hours before Yom Kippur to pick up your fish. Bump into old friends. Meet your neighbors. Participate in the magic that only happens when a gaggle of Jews get together, regardless of their background or history or devotedness to the commandments, when they drop their guard and act as Jewishly as they can in the flesh. Send back the soup. I fucking dare you.

There are those, of course, who still desire a more digital Jewish future. More remote Judaism. More dial-in Jewish events. More virtual Jewish life cycle options from the comfort of home. For those who are old and frail, or disabled, or live far from other communities, this is a mitzvah of technology. Let those people stream. But they are the minority. I know many more people who are anxious about returning to Jewish life in person, or have grown comfortable distancing themselves with technology, or find it an easy way to opt out. I was shocked that my own parents opted to attend virtual services this year. They love shul! But the temptation is there, and I fear that if we follow it to its logical conclusion, we will be lost. Somewhere in the twisted mind of Mark Zuckerberg, this is the goal, as he plans splashy metaverse bat mitzvahs for his daughters, with avatar hype-team dancers, an NFT sundae bar, and all other manner of extravagant pixelated party trappings that’ll make the rest of those virtual families reel with real world jealousy!

Let’s not make digital the default.

In her Rosh Hashanah sermon this year, my own rabbi, Elyse Goldstein, spoke about our need to come back together. “For the past two and a half years, our should-be-evolving Jewish identity,” she said, “has been ‘on hold,’ in a kind of deep freeze that is just beginning to thaw.” Most of us are automatically Jews by birthright, she said, but what is it that makes us “Jew-ish”? It is the things we do together. The rituals, both religious and secular, which bond us in a shared experience, that translates into a community, which forms a history, that we continue building each day as Jews.

But only if we show up.

David Sax’s latest book is The Future Is Analog: How to Create a More Human World, out this month.