Giving Thanks in Synagogue

In the late 19th century, when Thanksgiving was a new holiday, American Jews created religious services to mark the day. They didn’t last. 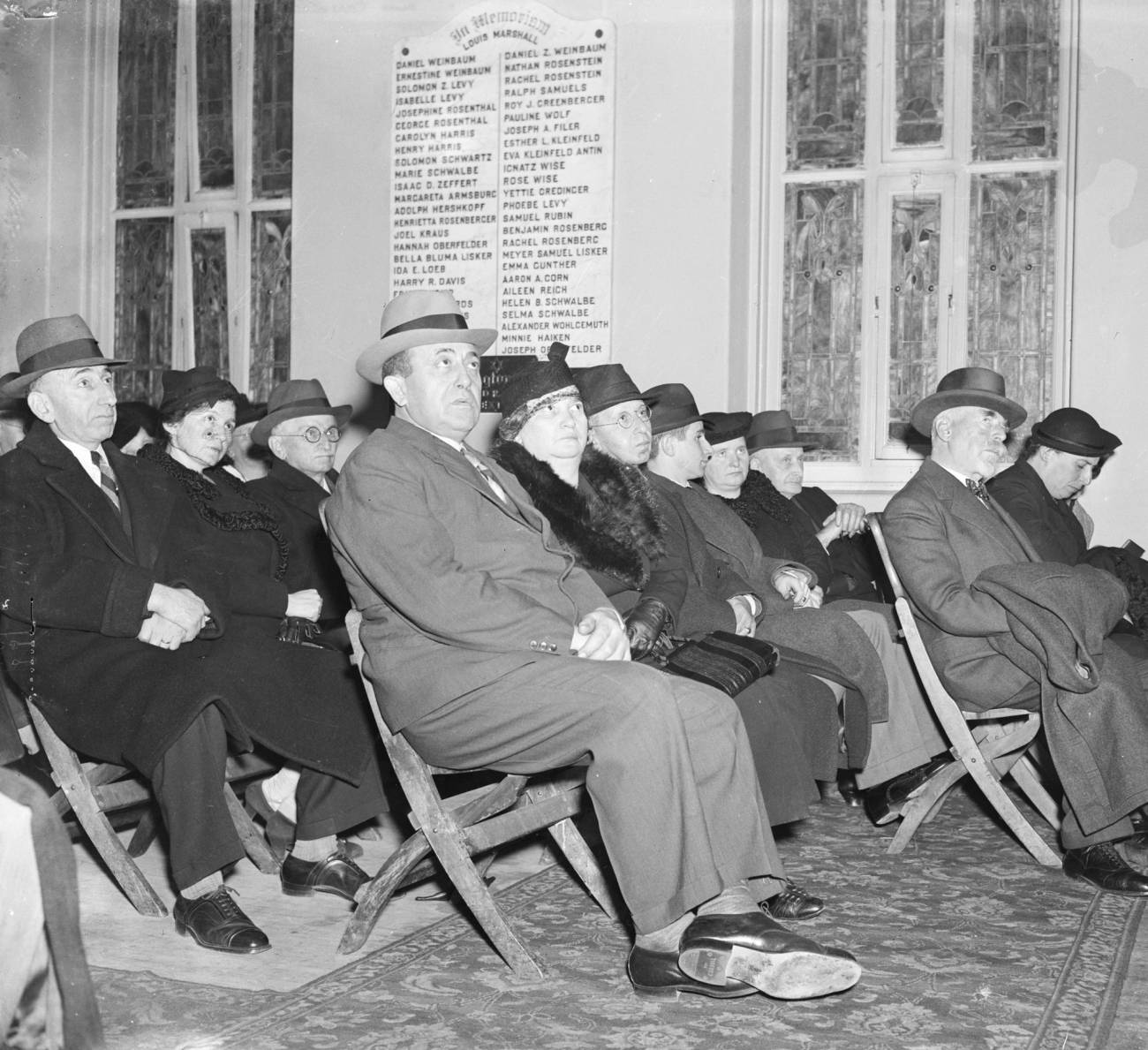 With all the hoopla that attends the annual celebration of Thanksgiving, you’d think the holiday had been around forever. American Jews of the late 19th century certainly thought so, or acted as if they did, publicly maintaining that a day dedicated to taking stock of and thanking the Almighty for one’s blessings was “no Yankee notion,” but an ancient Israelite one. “Like a good many things, [it] is derived from Hebrew laws,” claimed “Sopher,” a Jewish resident of the nation’s capital in 1886.

By insisting on Thanksgiving Day’s biblical antecedents, American Jews papered over its novelty as an artifact of the post-Civil War era, an exercise in national reconciliation. At the same time, they made a point of aligning Jewish history with American history, intimating that the two went together like turkey and cranberry sauce.

History wasn’t the only thing that endeared Thanksgiving to America’s Jews. Contemporary events had much to do with it, too. When comparing their blessed lot with that of their co-religionists in the Old World—“For freedom to worship Thy name; For manhood delivered from shame,” as a Thanksgiving hymn composed by poet S. Solis Cohen in the 1870s would have it—they had every reason to be grateful. “None ought to love this country more than Israelites,” the American Israelite declared a few years later.

Little wonder, then, that American Israelites embraced the November holiday, prompting the American Hebrew in an unusually lighthearted frame of mind to observe that the toothsome smells of a bird roasting in the oven was another one of those things that “tends to make us love our country for the excellent turkeys it produces on our tables.” Even those reared on duck or goose took to turkey and its trimmings with relish, making sure that the less privileged among them—the residents of old age homes and orphan asylums—might also enjoy a “grand dinner.”

No festivity, of course, was complete without a soupçon of grumbling. Some American Jews at the grassroots looked askance at their co-religionists’ fulsome reception of Thanksgiving. Labeling it an example of “chuckas hagoyim,” the emulation of gentile ways, they chalked up its popularity to assimilation, to the collective desire to fit in, and worried lest it betokened a withering away of Jewish identity. If only the holiday’s Jewish champions would fulfill their Jewish ritual obligations with as much enthusiasm, critics sniffed.

American Jews observed “national turkey day” in the same manner as their Christian neighbors, “picking the bone with as much gusto,” with one telling exception: Where the latter attended church services—making good on both the spirit and the letter of presidential proclamations that not only invoked the “enduring mercy of Almighty God,” but also recommended that Americans “withdraw themselves from secular cares and labors” by attending a religious service—latter-day Israelites sat it out and stayed put in the parlor. For most Christians of the late 19th century, related the New York Observer and Chronicle, the “home vies with the church in giving thanks,” or, as one of its church-going readers put it more colloquially, “First I pray, then I stuff.” Most Jews just “stuffed.”

American Jewry’s religious leaders were none too pleased with this state of affairs, which resulted in “beggarly” attendance at Thanksgiving Day synagogue services. They made known their disappointment publicly, wondering why they bothered to organize a one-hour gathering at either 11 a.m. or at 3 p.m.

Still, they kept at it. In an attempt to beef up the number of those in the pews, several synagogues joined forces, hoping that a “united service” would result in a respectable yield. In 1879, for instance, Philadelphia’s Mikveh Israel, Beth-El Emeth, and Beth Israel joined forces; a year later, a number of New York synagogues followed suit. But these “experiments” also fell short, drawing only 100 souls in a space capable of seating several times that number.

When pressed to account for their absence, some American Jews pointed to the well-documented fact that they were not known to attend synagogue services throughout the year. Why, then, would anyone expect them to make an exception for an improvised service on a chilly day in November? Others attributed their “meager” participation to the holiday’s “spread-eagle style of oratory,” which had worn thin.

Still other stay-at-home American Jews brought more principled objections to bear, worried lest the conflation of Thanksgiving with worship mar the equally hallowed separation of church and state. From their perspective, Thanksgiving was meant as a “purely American institution, not a sectarian one,” to be celebrated around a dining room table, not within the confines of the sanctuary.

“A piece of sentimentalism, very pretty in its own way,” Thanksgiving, the American Israelite cautioned in 1878, should not be deployed as a religious occasion lest people come away with the notion that America was a Christian nation. Far better to believe that the “good God would infinitely prefer to be served in other and more practical ways.”

At a time when growing numbers of Americans thought otherwise, filling the air with statements like those made by the Rev. P.S. Henson—a Baptist preacher who insisted that the United States was “a distinctly Christian nation, barricaded and buttressed by Christian principles”—holding a synagogue service on Thanksgiving soon became a communal priority, tantamount to a rebuttal. During the closing decades of the 19th century, the English-language Jewish press, for its part, made sure to highlight America’s religious diversity by tabulating the number of synagogues that offered a Thanksgiving Day service and, in what soon emerged as a ritual all its own, publishing either the entirety of or an extract from notable Thanksgiving Day sermons.

Synagogues from coast to coast, in turn, redoubled their efforts by inviting sympathetic local Christian “divines” to address their congregants on Thanksgiving Day, hoping their presence in the pulpit might demonstrate that Jews and Christians were “more alike than we are different.”

Well-intended demonstrations of brotherhood, these performances often backfired when an anxious Christian clergyman put a foot wrong (or in his mouth) by calling a Jewish house of worship a church or, worse still, by making much of Jesus having been a Jew. Spare us this “clap-trap,” counseled the American Hebrew in 1880, discounting its impact on the Jewish body politic. Such “gush,” echoed the paper’s Philadelphia correspondent who styled himself “Phil A. Delphus.”

Though in a minority, America’s Jews were not alone. They had company in the nation’s freethinkers and secularists who also objected to Thanksgiving’s “religious tinge.” An example of what we today might call religious nationalism, the holiday’s identification of good citizenship with divine intervention stuck in their craw. “We have no objection to pumpkin pie,” declared one of their number, an avowed atheist, “but protest against its being seasoned with theology.”

To which, over time, a growing chorus of Americans said, “Amen.” Little by little, the holiday’s association with religion grew fainter and fainter, its place taken by football games and festive parades.

Now that’s something to chew on when sitting down to this year’s holiday repast.

Jenna Weissman Joselit, the Charles E. Smith Professor of Judaic Studies & Professor of History at the George Washington University, is currently at work on a biography of Mordecai M. Kaplan.