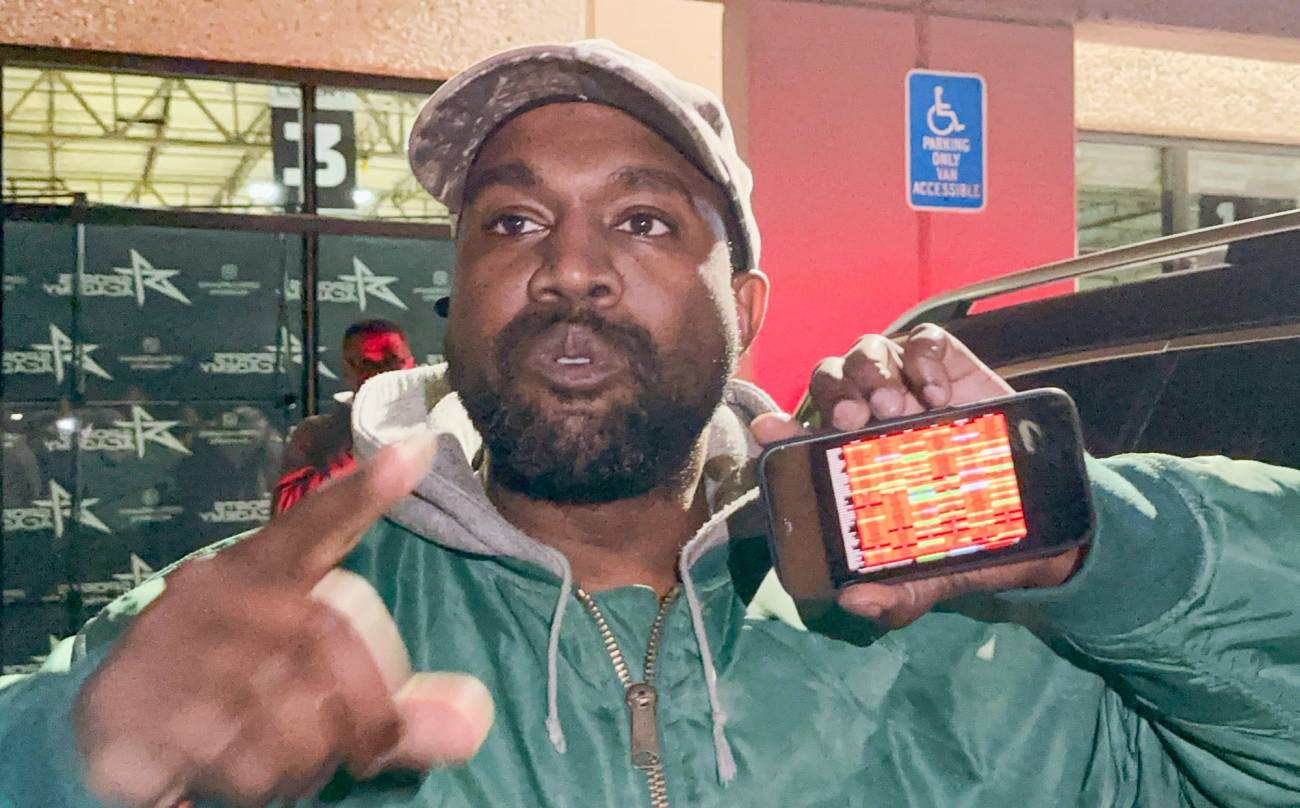 Kanye tried to name his album Hitler, haven’t you heard? It’s funny because there was a popular Norwegian author named Karl Ove Knausgaard who titled his novels after Hitler’s famous antisemitic screed—“Min Kamp” in Norwegian. And, of course, one cannot forget the band Joy Division, named after the sex slave wing of the SS. There’s always a mix of provocation and titillation when it comes to touching the Holocaust, as art attempts to fit every action of man into its creator’s paradigm. But at this point, we’re not cutting Kanye any slack because he is officially an antisemite, and, quite reasonably, if someone is an open antisemite, there’s not really much of a reason to listen or to communicate anymore unless it’s to tell them they’re crazy, which Kanye also clearly is.

Still, I don’t know if going Death Con 3 on Kanye West’s delusional off-the-cuff statements, rants, and performances and turning him into the poster boy for the miasma of antisemitism that poisons our culture along with 17 other types of race hatred ginned up by political operatives of every persuasion is truly the right way to go. I don’t even really believe that West is an antisemite as much as he’s an insane person with way too much money who married into the most haram family in the world. West is angry at white liberals, and he’s angry at those closest to him, who, according to him, happen to be Jewish. Also, Kanye thinks he’s Jewish. Correct me if I’m wrong, but I don’t believe that Hitler did.

What West believes is actually pretty hard to figure out. Is it a mixture of Black Israelite testaments and manic delusion, or is it a manifesto for a new Black movement of capital? Whatever he thinks, he’s scared away the people who control his money, and made himself a convenient scapegoat (or sacrificial lamb) for people, including the ADL, who have decided long ago that they don’t much care about antisemitism, but they do care very deeply who has the right to call someone an antisemite.

Much before this focus on West started, Donald Trump told American Jews that they needed to “get their act together before it’s too late.” If you think Trump can’t be antisemitic because his son-in-law is a Jew and he moved the U.S. Embassy to Jerusalem, well I have a concept album to sell you. Why not focus on Trump’s statements then? The obvious answer would be skin color, but there is a less obvious one.

West is separated from Black people because he is an astoundingly wealthy man, and he is surrounded by yes-men who are encouraging him to delve further into Hotepism. What is Hotepism? It is a myth, but a powerful one. It comes from the writings of Wallace Fard Muhammad, an itinerant seller of garments, who is known for spreading the message of The Nation throughout America. The basic idea is that Black people were originally in power, until one of their own, a devil named Yakub, created the white race. Everything bad that happened to Black people since has stemmed from this unfortunate decision.

Is Hotepism absurd? Of course it is. In fact, I first came in contact with these ideas through satirical memes and jokes heard on podcasts that I won’t bother naming (along with a few books that I skimmed and then destroyed). Yakub is supposed to be the biblical Jacob—this is where the Jews come in. This is also the point where it gets confusing. Moses, to Hoteps, is a Black man who tries to annihilate demons with explosives. Oddly enough, this theory mirrors the Freudian assertion that Moses came from Egyptian lineage as opposed to being born to a captive Jew. White Europeans (and this includes Jews) are therefore seen as initiators of whiteness, as opposed to inheritors of it. Needless to say, neither of these origin stories has any basis in historical reality; they are both completely made up.

Myths attempt to account for the way certain things are and also how those conditions might be changed. “This year we are slaves, but next year we shall be free!” Believing that you are a descendant of one of the lost tribes of Egypt can enable you to want to change your current dark reality. It’s a way of finding connection to the people you are chained to.

Yet, Kanye West seems to be using the lost tribes story to say that he’s somehow powerless, in a way which is actually true. He is a producer of Black music, but to most of the business entities he is partnered with, he is a brand that can be sold. There’s a part of him that visibly chafes against the bizarre condition of being an idol, and he’s said for a while that he wants to be the real thing: the messiah. But I think he might be something else, a doomsayer.

For West, being Black is a private and public struggle. If everything—the fame, the money, the family—separates him from Blackness, a simple look at how he’s been treated during this public spectacle can function for us the way a look in the mirror might function for him. The shared oppression between West and his Hollywood accusers is that they both claimed to believe in a multiracial utopia where anything and everything could be discussed. Obviously, we all know that this place is not America, but there was, perhaps, a time, following two terms of a Black president, when it seemed like the country could withstand some form of not-completely-idiotic conversation. That hope was obviously a hallucination, and now that everyone is sober or at least medicated, it’s perhaps worthwhile to realize that this truce between oppressed peoples has always been just that, a truce.

If you look at the headlines now, it would appear that the truce is over. The harder truth to swallow is that the truce didn’t really exist in the first place, or if it did, it was shallow and uneasy at best. As Ishmael Reed has argued more than once in these pages, Black people, especially Black men, aren’t really allowed to be alive and speak for themselves in America. They can be stereotyped as celebrity rappers, entertainers, or ballplayers, or they can be dead martyrs. Once Obama was out of office, there was a national regression. It felt like being transported back to the ’90s, where the only time you would hear a Black man speak was at the OJ Simpson trial. All of this adds up to a darkening of the Black male image, and I would argue that due to corporate profiteering off that image, the path to enlightenment has become as black as the hooded robes West wears.

This is a time for crooks, snake oil salesmen, and false prophets. It’s also a time of not hearing a word that anyone says. It doesn’t matter that West routinely says that he’s about peace and love, or that he says he’s Jewish, or that he apologizes for his outbursts. Kyrie Irving has now joined him in Club Antisemite because, from what I understand, he posted a clip to a Hotep movie. Forgive me if I find the outrage outsized. It seems like a mania. As someone who has been working on a book on Hoteps for the past year, I can only say that all of the kooky shit they talk about is widely disparaged, both by them and the Black community. It’s a subcultural code employed by a bunch of weirdos who are doing their best to think through something large with the pitifully tiny, comically misshapen tools that they have.

No one needs to worry about Black Israelites, truly. That being said, completely dismissing them out of hand does not seem wise either. Right now, they have been activated by these comments, and have waved their particular banners across the city. I doubt any of this will culminate in any action, but they seem very ready to believe that they are the real oppressed minority. It’s nonsense that comes to the fore when Black institutions are destroyed and the Black male conception of self derided.

What does it actually say to anyone who is watching that the only people that we listen to about Black males are those that make much more money than any normal Black male is ever going to see in his lifetime? In a roundabout way, I think West is actually grappling with the fact that he is an inadvertent self-appointed and corporate-certified spokesman for the Black male experience, a prophet’s mantle that he is probably unable to cast off—and has probably decided he doesn’t wish to cast off. There are probably people reading this who are thinking of and know the names of 10 to 20 writers that they think would do a better job of it than Kanye West, and who, like me, wonder why this mantle goes to a rapper who lives in LA as opposed to a dozen other people who are better suited for the job. Welcome to America.

I don’t think prophets are perfect, but I think they exist, and that West might be one. What I can glean from the visions he puts out are that he has seen the community that he has come from destroyed, and that he is surrounded on all sides by corruption. It’s a stark prophecy, but I don’t think it’s wrong.

It is important to first acknowledge, before condemning prophet West, that the delusions that have been thrown into an antisemite cast—these are delusions, remember—do not come from nowhere. It is wildly interesting to watch the companies that paid him hundreds of millions of dollars all decide not to do business with him now. It’s not because the ludicrous is true, it’s because they care about how we perceive them. But how should anyone perceive Adidas? How did a company founded by Nazis creak into 2022 selling itself as the mass market tailor for Black entertainers?

None of the answers I can think of to the questions I am posing here really satisfies me. Still, I think it’s fair to say that placing everything in bite-size loops for your viewing pleasure from the time you were a toddler has led to a situation where manipulation is not only easy, it’s demanded. I used to laugh at the whole idea that the phones were the enemy, but now that I write this I cannot help but see that people are falling all over themselves to rail at Elon Musk, furnishing more data for a site that he owns, in order to tell him and their “friends” how awful he is, while also condemning Kanye West and Kyrie Irving for being antisemites and canceling their sneaker deals and demanding that they turn over bags of money to the ADL or whoever is posing as this week’s defender of the Jews against the dire threat of Hotepism.

Elon Musk doesn’t seem very scared to me. He owns Twitter. He is the richest man in the world, and he listens to people who don’t want to be called Nazis but say that stuff the Nazis did was pretty cool. Hey, whatever sells more ads for Elon, and more sneakers for Adidas.

Perhaps before we damn the artist, we should take stock of what drove them mad in the first place.

Hubert Adjei-Kontoh is an itinerant bookseller and fiction writer.