Earlier this week, Palestinian terrorists — one a member of the Western-funded Palestinian Security Services — shot and killed an Israeli officer, before they were killed themselves.

Palestinian Authority (PA) official media outlets and the Fatah party — both headed by Mahmoud Abbas — have responded with support for the attack that killed the Israeli officer.

Most significantly, following the attack, Fatah officially announced that it is returning to terror.

Right after the attack, Fatah released a video on its official Facebook page celebrating the terror attack. During the video, a text appeared on the screen with three important messages:

1. “The Al-Aqsa-Palestine [Martyrs’] Brigades is officially announcing its operations”

2. “The Fatah movement takes responsibility for the operations of its military arm [the Al-Aqsa-Martyrs’ Brigades]”

3. The Fatah leadership announces that it has returned to the phase of the armed struggle [ i.e., Fatah’s euphemism for terror]”

The Al-Aqsa Martyrs’ Brigades is an internationally-designated terror organization. For years, the United States, Europe, and other funders of the PA have tried to differentiate between Fatah — which is headed by PA leader Mahmoud Abbas — and its terror branch, the Brigades.

Palestinian Media Watch (PMW) has argued all along that this differentiation is false and artificial. Now Fatah has officially confirmed that they are one organization, and that Fatah is taking credit and responsibility for its murderous terror attacks.

The third part of Fatah’s announcement is also significant. For years, PMW has been reporting that Fatah regularly declares that the pause in “armed struggle” is temporary, and that the phase of the “armed struggle” will return. Now Fatah has officially announced that it has returned to terror.

The implications of this announcement on international funding and support for the PA/Fatah should be significant. This may explain why shortly after posting the video, Fatah removed it from its Facebook page. However, PMW had already copied the post and downloaded the video, and will be releasing it.

While Fatah removed the video, they also posted many items on Facebook celebrating the terrorists and displaying their pictures. In the following post, it can be seen that one of the terrorists is wearing the uniform of the PA Security Services: 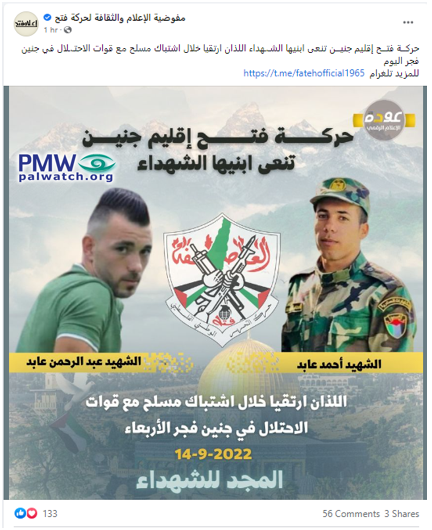 Facebook page of the Fatah Commission of Information and Culture, Sept. 14, 2022

The United States and many Western countries fund the PA Security Services to fight terror against Israel. PMW has reported numerous examples of members of the PA security services’ involved in terror. This time, official PA TV and other sources are acknowledging and even praising the involvement of the Palestinian police in terror.

tamar Marcus, Founder and Director of Palestinian Media Watch, is one of the foremost authorities on Palestinian ideology and policy. A version of this article first appeared at PMW