Reuven Rivlin speaks out against bullying

President Reuven Rivlln at the center of this photograph with Pop star Noa Kirel on his right side. Other teen-celebs include singer Agam Buhbut, second to his left, and actor Tal Mousseri known for his productions for children on the second row with the blue jacket /  (photo credit: AMOS BEN-GERSHOM/GPO)

President Reuven Rivlin made an important statement this week. Aimed at schoolchildren, it is a message that is nonetheless relevant to us all, particularly during these divisive times as the country heads back to the polls for the third election in a year.

Under the slogan #DontStandBy, the president on Sunday launched a campaign against cyberbullying. The initiative, in partnership with the Education Ministry’s psychological counseling service, includes a range of activities on social media using the hashtag (in Hebrew, “lo omdim mehatzad”) to raise awareness and combat the phenomenon.

“Social exclusion and bullying are nothing new, but in the digital age there are new ways to harm and abuse people – and verbal violence kills. It kills children’s dreams and hopes every day and has already claimed the lives of children who did not find a way out of the suffering and ended their own lives,” said Rivlin at the event at the President’s Residence in Jerusalem.

As The Jerusalem Post’s Greer Fay Cashman reported, Rivlin told them a story about a boy who didn’t want to go to school because he knew he would either be shunned, ridiculed or cursed. He had been excluded from his peers’ WhatsApp group, and even his best friend had told him that he no longer wanted anything to do with him.

Rivlin urged all children not to stand on the sidelines but to intervene and help victims before the situation gets out of control.
As part of the campaign, influencers popular with youth, including singers Noa Kirel and Netta Barzilai, recorded tips on combating bullying and exclusion in the virtual and real worlds.

The tips include looking out for negative comments in groups and rejecting them; making sure a kid isn’t sitting alone on the bus on a school trip and sharing snacks with them and including them; being aware that verbal abuse can be no less harmful than physical violence; if you see an insulting clip on Tik Tok, send a private message asking the poster to delete it; if you see the type of child who keeps everything in, even when they’re suffering, ask an adult you trust, like a teacher, to help; make sure that kids are not alone during school vacations; and ask a kid who doesn’t seem to have friends to help with homework or studying for exams.

Education Ministry director-general Shmuel Abuav, like Rivlin, spoke of the Internet as “one of the great challenges of our times,” and Public Security Ministry director-general Maj.-Gen. (ret.) Moshe (Chico) Edri discussed an interministerial civil-law enforcement body for social media: “In a world first, police and civilians are working together in a single national bureau.”

Rivlin recorded a special clip, as if he was talking directly to a classroom from a framed photograph of the president on the wall. He is also featured in an Instagram filter that children can use to photograph themselves with him in the frame and post a story as part of the campaign against bullying. A special Instagram page – @lo_omdim – will include all the tips, clips and pictures.

The president made it clear that nobody – not even himself – is immune to cyberbullying and that everyone can take a stand against it.

“We have all come across cases of verbal aggression and violence, and when I say all of us, I mean myself as well. I also get violent responses on social media, and even though I am a grown-up, it is still hard. We must not allow this to become routine. We must not stand by when we come across behavior like this, even if it is not aimed directly at us. Let us promise today, together, all of us, to save lives and not to stand by!”

We’re grateful to President Rivlin for reminding us that even during election times there are broader social issues that the country needs to address. We must never forget that providing a safe environment for our children means not only being concerned with their physical safety but also their social and emotional well-being, which includes stopping cyberbullying and promoting inclusion.

Sabreen Saadi is set become the first hijab-wearing Muslim woman to attain the rank of lieutenant in the Israel Police.

I always love to share stories about Arab Israelis since their stories are seldom heard in int’l media.

Congrats to Master Sgt. Sabreen Saadi, a Hijab wearing muslim police officer, who will soon become a lieutenant with the Israeli police! 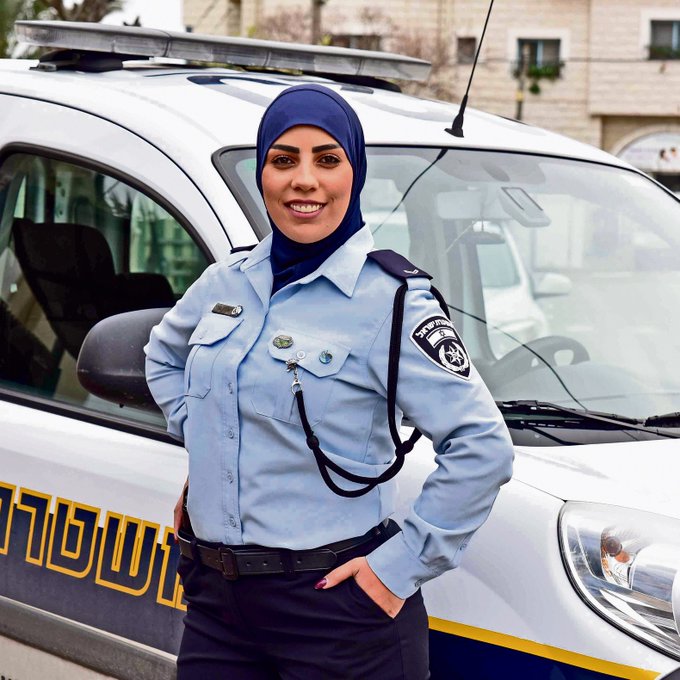 Saadi comes from a traditional Muslim family in a Bedouin town in northern Israel. She told Yediot Ahronot she had received some threats from others in her community over her choice of career path, but said she was not deterred, stating, “I fear only God.”

Since 2016, when the Israeli government established a special unit aimed at improving policing and security in the country’s Arab communities, more than 600 Arab men and 55 Arab women have enlisted in the Israel Police. Eight new police stations have been established in the Arab sector, with the intention of adding ten more.