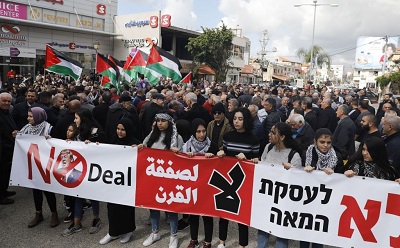 A Palestinian boy wears the headband of Hamas’ armed wing as he takes part in a rally to protest against an Israeli police raid on Jerusalem’s al-Aqsa mosque, in Gaza City September 15, 2015 /  (photo credit: REUTERS/SUHAIB SALEM)

A coalition of non-governmental organizations is urging the public to help stop the use of Palestinian children as soldiers and war resources by their leaders and terror groups in the region.

There are an estimated 300,000 child soldiers across 20 countries world-wide, including any person under 18 who is either recruited or used by an armed force or armed group in any capacity, according to the Convention on the Rights of the Child.

While the plight of child soldiers in Africa in particular has received global attention, their Arab counterparts in the Palestinian territories have often been ignored by the international community, as the human cost of using children to carry out terror attacks or as human shields has become overlooked in the political battles raging over the Arab-Israeli conflict.

Yet the children who survive their ordeal often carry the scars of trauma with them into their adult years, preventing them not only from having a normal childhood, but from being able to live fulfilling lives as adults.
Now a group of NGOs has banded together in a bid to raise the issue of Palestinian child soldiers on the world stage.

From February 18 -21, the Coalition to Save Palestinian Child Soldiers is holding a Solidarity Week, and is urging members of the public to sign an open letter to MEPs and US child welfare advocates to condemn the use of Palestinian children as soldiers.

For decades, the letter states, Palestinian children “have fulfilled the role of combatants, human shields, rioters, laborers, support staff, and even as suicide bombers, and as a result, their childhoods have been short by death, severe injury, or imprisonment.”

The global community’s unwillingness to address the issue “has emboldened organizations such as Hamas, Fatah, Palestinian Islamic Jihad and PFLP in their exploitation of children as war resources,” the letter continues.

A 2016 report found 240 US-government approved textbooks, used in hundreds of UNRWA-sponsored schools were teaching Arab children between the first and ninth grades to kill Israelis and martyr themselves. Other reports have reached similar findings. Yet despite this, it was not until August 2019 that the UN finally called on Palestinian leaders to act against “racist speech and hate crimes,” including incitement to violence against Israelis and Jews.

“These organizations expose them to inciteful and violent children’s shows, and flood social media with calls for jihad and terrorism,” the letter reads. “When the children are older they’re sent out to partake in violent riots and to act as human shields as thousands of others have before them.”
The letter notes that an estimated 10,000 children are trained in Gazan terrorist camps each year, while at least 160 have died digging terror tunnels into Israel.

The NGOs hope that public pressure put on the terrorist organizations will eventually force them to abandon their use of children to fight their wars. As part of that effort, they are also encouraging people to hold rallies and share materials online to raise awareness to the fact that the children are being used in this way.

One video, entitled ‘Palestinian Child Soldiers in Numbers’ notes that 17,000 children were enrolled in Hamas’ child militia programs in 2019, and that 29 children have already lost their lives as suicide bombers. “Dozens more” were prevented from carrying out their attacks.

“In combat, children from 17 to as young as 9 have been pushed into the battle fray, to fight and die alongside adult militants and terrorists. While in some cases the youngest of these casualties has been covered up with older, fake ages on casualty lists, Hamas and PIJ have been proud of the teenagers that have been “martyred” in battle,” the organizers noted in a statement on their website.

“These practices have lead to a strategic culture that views children as resources, and denies them their childhoods.

“For the future of the Palestinian people as a whole, and for these children as individuals with rights according to international law and decent moral doctrine, the above practices must be stopped.”

Jewish actress Natalie Portman dedicated an Instagram post on Tuesday to her great-grandparents who were murdered by the Nazis, in honor of International Holocaust Remembrance Day.

“Today I honor my great-grandparents, Leiser and Leah Hershlag, who perished along with millions of others at the hands of the Nazis,” the 38-year-old, who was born in Israel as Neta-Lee Hershlag, posted alongside a photo of of her late relatives.

She then quoted Jewish diarist and Holocaust victim Anne Frank, who wrote, “I see the world being slowly transformed into a wilderness; I hear the approaching thunder that, one day, will destroy us too. I feel the suffering of millions. And yet, when I look up at the sky, I somehow feel that everything will change for the better, that this cruelty too shall end, that peace and tranquility will return once more.”

Today I honor my great-grandparents, Leiser and Leah Hershlag, who perished along with millions of others at the hands of the Nazis. In the words of Anne Frank: “I see the world being slowly transformed into a wilderness; I hear the approaching thunder that, one day, will destroy us too. I feel the suffering of millions. And yet, when I look up at the sky, I somehow feel that everything will change for the better, that this cruelty too shall end, that peace and tranquility will return once more.” #HolocaustRemembranceDay

In a recent interview with Harper’s Bazaar UK, the “Thor” star talked about her family’s Holocaust history, saying, “My great-grandparents were killed in the camps, and my grandfather’s younger brother was shot in Poland during the war.”According to the website Kveller, along with the Instagram post about her great-grandparents, Portman also shared on her Instagram stories a post from Integrity First for America, an organization that is fighting antisemitism and racism in the US by suing the neo-Nazis and other white supremacists who were behind the violence at the Unite the Right rally in Charlottesville, Virginia, in August 2017.