Blundering Into the Sukkah

Rokhl’s Golden City: The connection between a magnificent Temple and a humble hut. 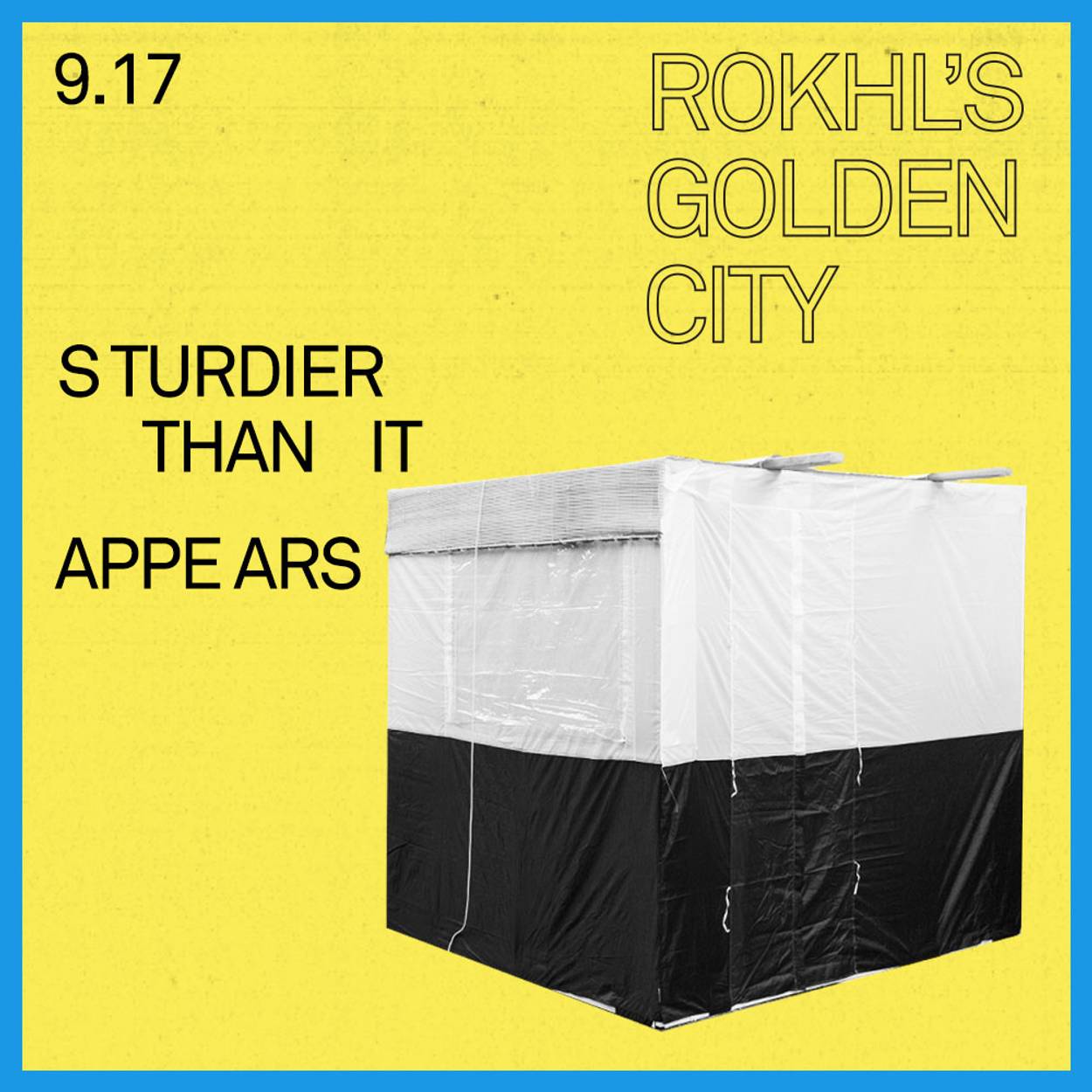 This is one of my favorite Yiddish idioms: Arayngefaln vi a yovn in a suke.

Meaning “blundered like a Greek into a sukkah,” it has the same general meaning as describing someone as a “bull in a china shop.” But the yovn in the suke also brings to my mind the yevanim, the Greeks, of Hanukkah’s “Maoz Tsur.” The villains of the khanike story are formidable:

The Greeks gathered against me, in days of the Hasmoneans
They broke down the walls of my towers, and defiled all the oils.

The yovn in suke, on the other hand, is arayngefaln; he has, quite literally, fallen into a temporary hut, a rustic “booth” made of twigs and held together by construction paper rings. He is more fool than foe. And he reminds us that while our enemies oppress us now, all enemies, and all oppressions, are ultimately temporary.

Of course, this is my own personal interpretation, a folk etymology of one. There’s a more prosaic, and depressing, explanation for the curious presence of the yovn in suke. As Michael Wex tells us, the yovn in the expression is interchangeable with a kozak, a Cossack. Both had the general meaning of “soldier.” Yovn sounded like Ivan to Yiddish speakers, lending it the connotation of what Wex calls “a Czarist GI Joe.”

Still, it’s a satisfyingly ironic expression. And it calls attention to some of the other intriguing ironies of the festival of Sukes (Sukkot). Take, for instance, the haftore we read on the second day of the festival, from I Kings. Shloyme Hameylekh, King Solomon, has finished building the beys hamigdesh, the Temple. He gathers the Children of Israel to celebrate the festival of Sukes, and to bring the Ark of the Covenant to the newly built Temple. (The dedication of the Temple and the festival of Sukes are actually two overlapping, mutually reinforcing festivals in the story.)

That moment of dedication is preceded by a lengthy recounting of the custom fixtures and exquisite detailing on both Shloyme Hameylekh’s palace, as well as the new Temple. Upon the installation of the ark in the inner sanctum, the glory of Hashem appears as a “cloud,” filling the Temple. This is the shkhine, the divine presence.

Hashem said that He would dwell in the thick cloud.
I have surely built a house of habitation for You,
the foundation for Your dwelling forever.
(Artscroll, Stone edition translation)

The appearance of this thick cloud is the continuation (or fulfillment) of the Lord’s instructions to Moses and Aaron, that He would appear at the ark, inside the Holy of Holies, as a cloud. It is now proof that Shloyme Hameylekh has done as divinely commanded.

Any encounter with the Lord is dangerously serious business. Aaron was told that should he enter the Holy of Holies at the wrong time, he would surely die, for that is where He appears in the cloud, above the ark.

And yet, there is something slightly absurd about the juxtaposition of the two things: on the one hand, the tricked out, gilded glory of the Temple in all its precise measurements, and on the other, the ancient, spooky simplicity of a holy cloud rolling in to remind everyone whose house it really is. But why even does a cloud need a place to live? And such a fancy one, at that?

As I write these very words, I notice a footnote in the Artscroll translation already rebuking me for such a silly thought. “The purpose of this Temple was not to serve as a ‘residence’ for God; that would be absurd. Rather, the Temple would be a conduit to God for the prayers of Israel—and all of mankind.” Yet, such an “absurd” idea would not need rebuttal if it hadn’t been so heavily implied by the text, right?

Shloyme Hameylekh’s Temple is dedicated at the same time the Israelites are celebrating the Festival of Booths. There is some disagreement about what exactly the booths are supposed to symbolize. We are commanded by God to commemorate the dwellings of the Israelites when He took them out of Egypt. But, the booths are probably also connected to the temporary dwellings used by those laboring at the final harvest of the year. Both meanings of the suke lead inevitably to a meditation on fragility, and the temporary nature of human life, sustained as it is by God’s miracles. The two types of structure at play in the text, magnificent Temple and humble hut, could not be more different. Both are, indeed, dwellings of tangible holiness.

The magnificent fragility of the suke can be found in the Yiddish song “A sikele a kleyne” (A Little Sukkah, a Humble One). It’s based on a poem by Avrom Reisen, subsequently folklorized by various singers. You can hear it performed by the also magnificent Beyle Schaechter-Gottesman, z’’l.

A little sukkah
with simple boards,
I barely put together.
I covered the roof
with a little skhakh,
and I sit in the little sukkah and think.

In the Temple, nothing less than the cloud of the shkhine can be found a-dwelling. In golus, we are at 2,000 years’ distance from the Second Temple, and the shkhine itself is in exile. Our humble suke is visited only by a gust of cold wind.

The cold wind
blows through the cracks
and almost blows the candles out.
Listen to this wonder—
only when I finish saying the kiddush,
then the candles blow out.

The longing for a rebuilt Temple, and with it a new home for the shkhine, is part of the fabric of day-to-day Jewish life. Blessings for the reestablishment of the Temple are central to the Amidah, for example. We are constantly turning our hearts to a future when we will be redeemed, as well as the architecture through which that redemption will come.

But it is not simply messianic hopes that sustain the Jewish people through exile. A sikele a kleyne reassures a weary people that the humble suke, the dwelling of right now, is far sturdier than it first appears. We merely have to have the faith to build it ourselves.

ALSO: Golden City fave Ira Temple is teaching a 15-week Community Klezmer Band class at the Brooklyn Conservatory of Music for intermediate-level instrumentalists, no background in klezmer required … Join Zoë Aqua and Adah Hetko for a conversation and performance program, “Contemporary Klezmer Music and Yiddish Song.” Professor Yonatan Malin of Colorado University will interview Aqua and Hetko about their own work as creators in the klezmer scene, as well as exploring the historical context of today’s klezmer music. Sept. 20, register here … SOAS University of London commissioned my friend Polina Shepherd to write new settings for the Yiddish poems of A.N. Stencl. “Singing Stencl” will premiere those new songs in concert, Sept. 24 … Marek Web was a prominent Yiddishist in postwar Poland, writing and teaching in Yiddish. He left in 1969, and came to New York, where he joined the staff at YIVO, ultimately becoming its chief archivist. Web passed away in May of this year. YIVO will honor his memory with a program on Sept. 24 at 1 p.m. Register here … Interested in genealogy? Check out the upcoming class “All in the Mishpocheh: Intro to Jewish Genealogy” at the Center for Jewish History. The 10-session class begins Wednesday, Oct. 6 at 4:30 p.m., via Zoom. Register here … Live theater has returned to London! Indecent tells the story of the theater troupe that brought Sholem Asch’s God of Vengeance around the world, and ended up on trial in New York. Through September, tickets are available for the scandalously low price of 15 pounds … Still looking for an online beginner’s Yiddish class this fall? The Yiddish Book Center is offering a number of sections of their six-week beginners course, using the wonderful new In eynem textbook. Classes run November-December 2021.

Rokhl Kafrissen is a New York-based cultural critic and playwright.