Though the Shiite terror group has previously accepted failed operations as sufficient, it is indicating this time that its retaliation for a fallen fighter has yet to come 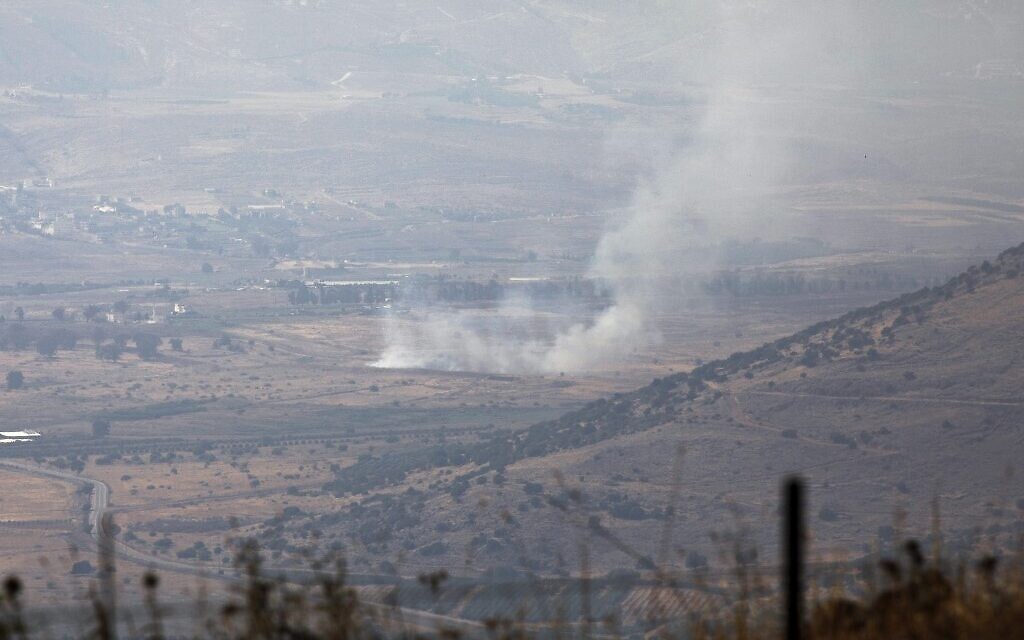 A picture taken from the Israeli side of the Blue Line that separates Israel and Lebanon shows smoke billowing above the Shebaa Farms sector after clashes in the border area, on July 27, 2020. (Jalaa MAREY / AFP)

Over the years, as the Hezbollah terror group has worked to build up its military capabilities and the Israel Defense Forces has sought to foil those efforts, the two sides have developed and maintained certain red lines and understandings. For Hezbollah, which relies heavily on popular support at home, this includes retaliating to any deaths of its fighters, a strategy of tit-for-tat that has been playing out along the northern border over the past week.

Last Tuesday night, Hezbollah announced that one of its members — Ali Kamel Mohsen Jawad — was killed in an Israeli airstrike on an Iran-linked facility in Damascus International Airport. Though the explicit threats came later, past experience made it clear to Israel that some kind of response was a matter of time — likely an anti-tank guided missile (ATGM) strike on an Israeli military vehicle, though a sniper attack or improvised explosive device planted on the border were not out of the question.

On Monday afternoon, it appeared as though Hezbollah had made its move to get revenge for its fallen operative in Syria. According to the IDF, a group of armed Hezbollah operatives crossed into Israeli-controlled territory from Lebanon shortly after 3 p.m., moving toward an IDF post on the contested Mount Dov, also known as Shebaa Farms, before Israeli troops opened fire toward them, forcing them to flee back across the border.

This alleged attempted attack was somewhat peculiar, occurring in the middle of the afternoon when visibility is highest and in an area that — even when border tensions aren’t running high — is under constant surveillance as it has regularly been the site of Hezbollah attacks on Israeli troops. Under those conditions, success would be unlikely. According to the military, the Hezbollah operatives never fired a shot during their infiltration. Lebanese news outlets speculated the group may have been performing reconnaissance rather than attempting to conduct an attack.

IDF Spokesperson Hidai Zilberman said Monday the military was not yet sure what type of attack the Hezbollah cell had been planning, but said it was confident that they were up to something nefarious.

“A cell sneaking into Israel in the middle of the day, they probably weren’t going to have a barbecue,” Zilberman told .

Somewhat conspicuously, despite the IDF having infantry troops, tanks and artillery cannons on the ground, as well as drones, helicopters and centerplanes in the sky all along the border, Hezbollah-affiliated media said none of the group’s fighters were killed or wounded. This led to speculation that the Israeli military deliberately did not try to hit them, as doing so may have only led to additional calls for retaliation and threats of violence by Hezbollah. 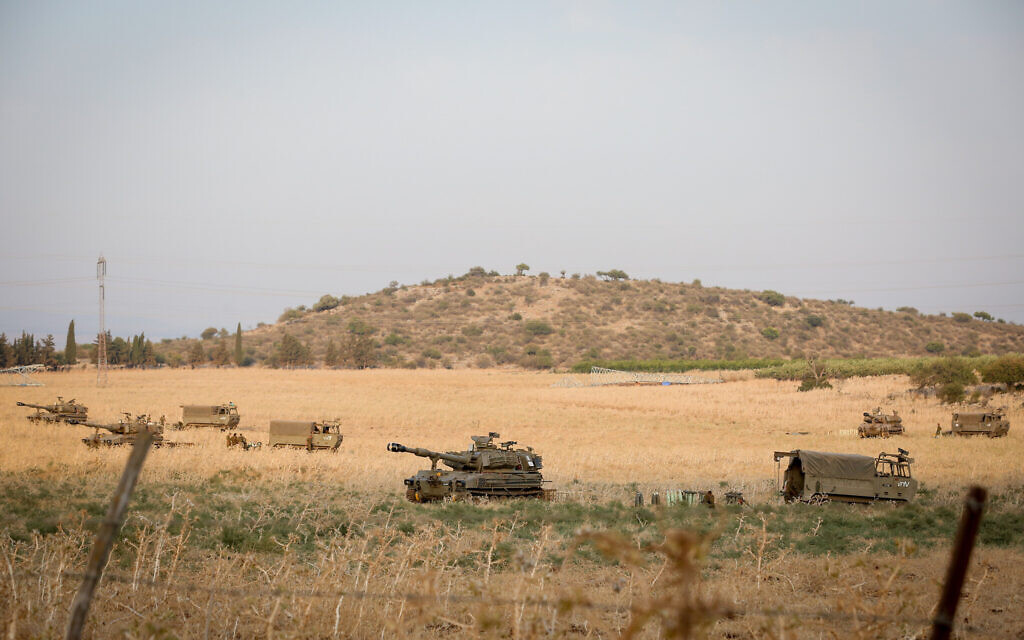 Israeli army forces seen stationed near the border between Israel and Lebanon in the Golan Heights on July 27, 2020. (David Cohen/Flash90)

This round with the terror group could end there, with no casualties on either side. Israel and Hezbollah could then return to what Israeli officials refer to as the “campaign between campaigns,” known in Hebrew as the Mabam, the conflict simmering just below the surface in which Israeli security forces look to prevent Iran and its proxies, including Hezbollah, from acquiring more and better weapons and establishing a permanent military presence on Israel’s border with Syria.

During the campaign between campaigns, Israel does not consider killing low-level operatives to be its goal, preferring instead to disrupt larger plots and operations. Somewhat counterintuitively, Israel often attempts to avoid killing Hezbollah fighters in these missions if possible, to prevent the fallout and headaches that go along with their deaths, potentially distracting from the larger objective.

At the same time, Israel does not shy away from Iranian, Syrian and Hezbollah casualties when it sees an imperative for action. “We acted against the entrenchment of Iran in Syria. If someone involved in Iran’s activities in Syria — which we will continue to act against — this is liable to happen. We take that into account,” Defense Minister Benny Gantz said about the matter on Sunday.

Accepting failure
The understanding among defense analysts in Israel and elsewhere in the Middle East is that neither Hezbollah nor Jerusalem are interested in war at this time.

For Israel, delaying an all-out conflict — however inevitable — is generally seen as a value in itself, giving the country’s citizens longer stretches of calm and the economy more time to thrive.

Meanwhile, Hezbollah is facing growing pressure at home, which could worsen if a devastating war with Israel broke out. Since October, Lebanon has been in the throes of a crushing financial crisis, one which has only been exacerbated by the coronavirus pandemic. 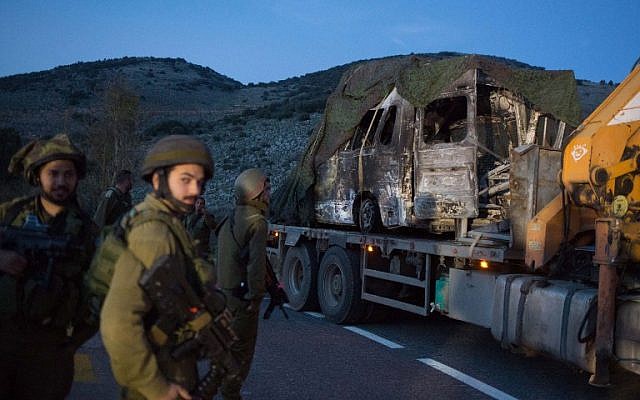 Israeli soldiers look at a burned-out vehicle loaded onto the back of a truck near Ghajar after it was removed from the seen of a Hezbollah missile attack along the Israel-Lebanon border on January 28, 2015. (AFP/MENAHEM KAHANA)

In the past, the very act of attempting to attack Israeli troops was sufficient to bring a round such as the current one to a close, regardless of the actual outcome. This was true both if IDF soldiers were killed — as in 2015, when Hezbollah fired an ATGM at an Israeli jeep, killing two soldiers, in response to the deaths of six Hezbollah members and an Iranian general in a strike attributed to Israel — and if the Israeli soldiers emerged unscathed — as occurred last September when three missiles were fired at an Israeli military position and an armored ambulance, all missing their target, albeit narrowly in the case of the vehicle.

Yet on Monday evening, instead of lauding the operatives’ infiltration or finding some other way to turn the alleged failed attack into a victory — as it did last September — Hezbollah officially denied that its fighters had attempted an operation of any kind and said that the retaliation for Jawad’s death was “definitely coming.”

Israel, for some reason, has not sought to disprove Hezbollah’s denial by releasing its security camera footage of the Hezbollah operatives, which would at least prove if armed men indeed infiltrated into Israeli territory from Lebanon.