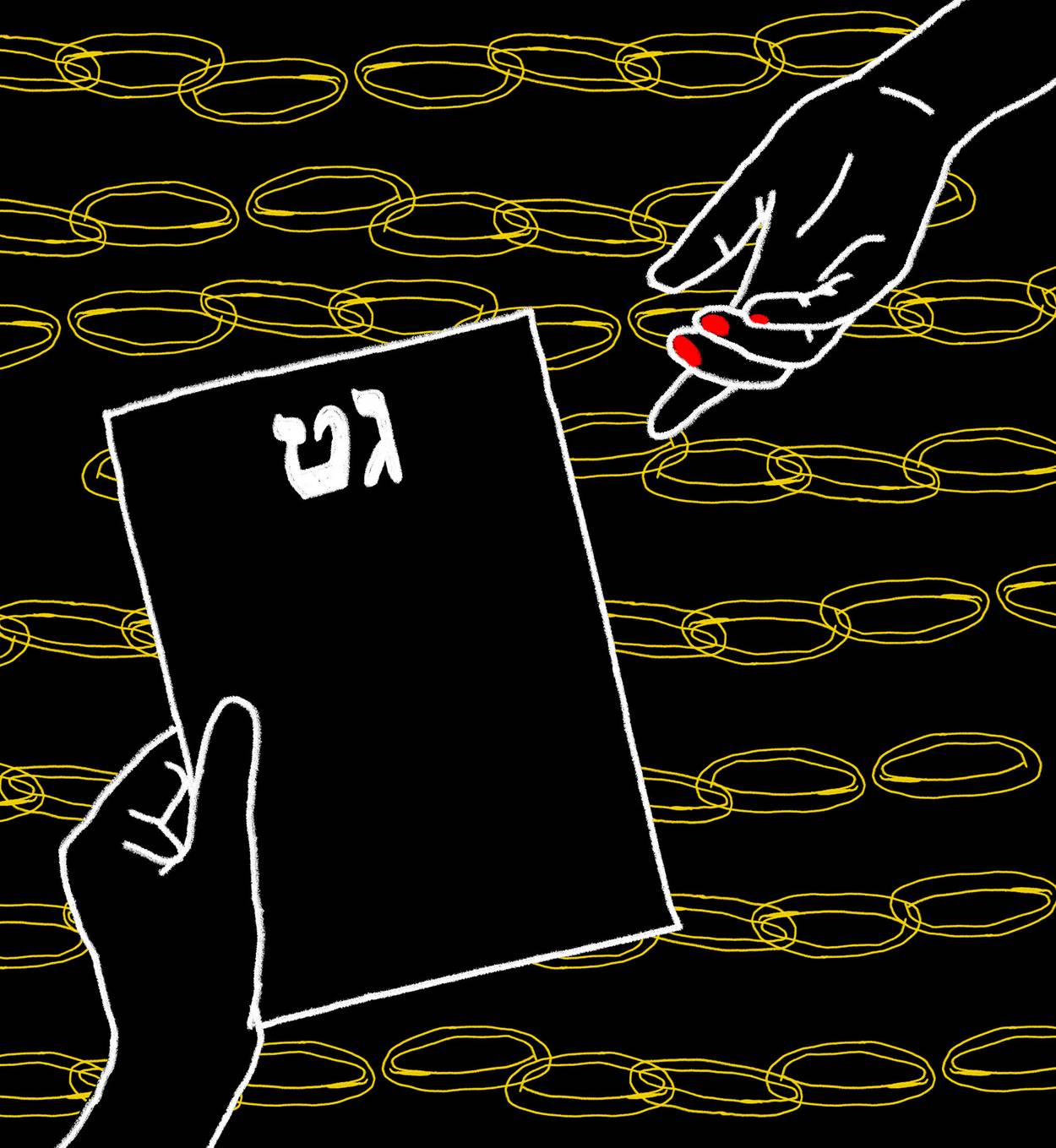 Gary Lesin-Davis is an experienced English criminal lawyer whose cases typically revolve around complex fraud and international money laundering. But in recent years, he has picked up a new area of expertise: He has become known for using English law to prosecute recalcitrant Orthodox Jewish husbands who render their wives agunot—“chained women”—by refusing to grant them a get, a Jewish bill of divorce.

Historically, the term agunot referred to Jewish women whose husbands had disappeared during war or travel, leaving it unclear whether their missing husbands were alive or dead, and rendering the women “anchored” to their marriages, unable to move on and remarry while the fate of the husbands was unknown. In the modern era, the term generally refers to women who have become “chained” to marriages because their husband refuse to grant them a get.

There are many reasons why men withhold gets from their ex-wives. Often gets are used as leverage in custody and financial disputes, or are used as a controlling mechanism, where withholding the religious divorce prevents ex-wives from having the option to remarry in their community.

Agunot are a global issue, with rabbis, lawyers, and advocates using a mix of creative halachic thinking and innovative legal approaches to try and solve this longstanding problem.

“The side of things you see in domestic abuse cases—domestic violence, domestic control, financial control, emotional and psychological pressure—in all these instances there is pressure put on the victim. Get abuse is a form of that,” said Lesin-Davis. “It is not just physical assault. There was always legislation to deal with that. But there was never any legislation to deal with the stuff that goes on in relationships that falls short of physical violence, and sometimes that’s longer lasting than a punch or bruise.”

In a widely reported case recently, Lesin-Davis successfully argued that withholding the get was a form of coercive control that should be prosecuted under England’s Serious Crimes Act, a piece of English criminal legislation that was not specifically drafted for agunot. Using such legislation was not without difficulty.

“One of the key elements of this law is that the parties have to be personally connected, in an intimate relationship or living together,” he said. “The difficulty with this legislation is when a couple have divorced civilly and haven’t lived or slept together in years. It can be difficult for non-Jews to understand Jewish relationships, where even in such a case, in [Orthodox] Judaism, the wife would not be permitted to [be in a relationship] anyone else, even if she has had nothing to do with her husband for years.”

The fight to free agunot utilizing the secular court system rather than through the rabbinate is not without controversy. Some dayanim, or religious judges, are loath to advance the use of secular law on behalf of agunot, arguing that court-ordered punishments would invalidate any religious divorce given, as gets must be given freely and without pressure.

Rabbanit Ellyse Borghi, an Australian family lawyer who is also on the board of Unchain My Heart, an Australian get-advocacy organization that collaborates with other international get advocacy groups, empathizes with women who turn to solutions outside of a traditional Beth Din, or religious court.

“I think it is a really shameful that our religious courts and religious leaders are not able to resolve this issue themselves and have delegated this responsibility to the secular courts,” she said. “There is an enormous scope within Halacha to deal with these issues directly and I think we will get much better outcomes using halacha to address these issues rather than civil law.”

But with women often languishing, and creative and reliable halachic solutions not yet foolproof, scores of women are drawn to solutions, even outside of a Beth Din, that will allow them to be free.

“Batei Din in the diaspora do not have enforceability when it comes to sanctions in the same way Batei Din do in Israel,” said Joanne Greenaway, a lawyer and chief executive of the London School of Jewish Studies who previously worked on resolving get cases. “The secular courts are an additional tool that can be helpful to the Beth Din. It sends a really clear message that get refusal is abusive and is not OK. And that can help the Beth Din from preventing new cases from arising.”

When asked how many agunot she estimates are currently in England, Greenaway was considered in her response: “It is so hard to quantify because there is no standard, uniform definition of agunot and there are always many cases open at varying stages and with a whole range of different complexities,” she said. “It is hard to put a quantity on someone’s pain when you just measure the numbers.”

While the English cases have set a precedent for how get cases may be prosecuted in the future by secular courts in the U.K., similar outcomes are less certain in other jurisdictions.

Michael A. Helfand, an expert on religious law and religious liberty as well as vice dean for faculty and research at Pepperdine University in California, understands the difficulties involved in bringing such a case in the United States. “In the context of religion, there are very strong First Amendment reasons why [replicating a similar case in the United States] would be difficult,” he said, while also noting, “It’s not to say those hurdles are insurmountable.”

A recent case in California seems to indicate that under certain circumstances there may, on occasion, be some appetite for American courts to deal with coercive control in the context of agunot. “The recent California decision is an example of using the husband’s refusal to grant a get as one piece of evidence—among others—supporting a finding of abuse,” said Helfand. “In that way, it deftly avoids the kind of decision that runs into First Amendment problems, focusing instead on the coercive control inquiry.”

In the U.S., the First Amendment provides that Congress make no law respecting an establishment of religion or prohibiting its free exercise. Legal experts generally understand this to mean that courts should not be trying to figure out what is or is not appropriate religious conduct.

“Sometimes courts say they should not get entangled in religious issues,” said Helfand. “The kind of case where you [could overcome the First Amendment] would be one where from the specific facts of the case, you could excise the religious behavior and separate it from the abusive behavior. If there is a way to separate abusive behavior, then religious exercise could be possible and surmount constitutional obstacles.”

Helfand pointed to the two get laws in New York State that aim to prevent agunot by directing judges to take several factors into account and effectively condition the procuring of a civil divorce upon the giving of a get. “These laws could potentially be replicated elsewhere around the country,” he said.

Keshet Starr, executive director of the Organization for the Resolution of Agunot in the United States thinks the prevention of agunot should occur through a multifaceted approach. “The way I think about it, instead of thinking of one bulletproof solution, the goal is to have a well-stocked toolbox with a lot of tools that help,” she said.

One of her go-to suggestions is the halachic prenuptial agreement. Created by the Beth Din of America, and promoted by ORA, the agreement is signed by couples before they marry and in the event of a divorce, requires the parties to appear before a Beth Din.

According to the prenup, if the couple does not live together anymore, the husband is required to pay monetary support to his wife at a daily fixed rate as long as they remain married. This then empowers a Beth Din to have the requisite power to enforce the get.

“The prenup is a strong tool because it helps change the conversation,” Starr said. “It also creates social change that gets shouldn’t be used for leverage in divorces.”

Starr’s organization’s approach has been successful in helping many agunot. “ORA’s position is to create organic change within the system,” she said. “We are inside the circle to work with rabbinic leaders. Figuring out these tools are complicated. We ultimately want to offer agunot a range of options. Not every option is right for all people. We don’t believe pushing people down one path but giving them options and they can pick whatever feels right to them as they go through this process.”