A Palestinian farmer cultivating his land in city of Khan Younis in the Gaza Strip unearthed the head of an ancient sculpture which Palestinian archaeology authorities identified as Canaanite dating back to about 2500 BCE.

Wafa News Agency – English @WAFANewsEnglish
Canaanite sculpture dating back to about 2500 BC discovered in the Gaza Strip. 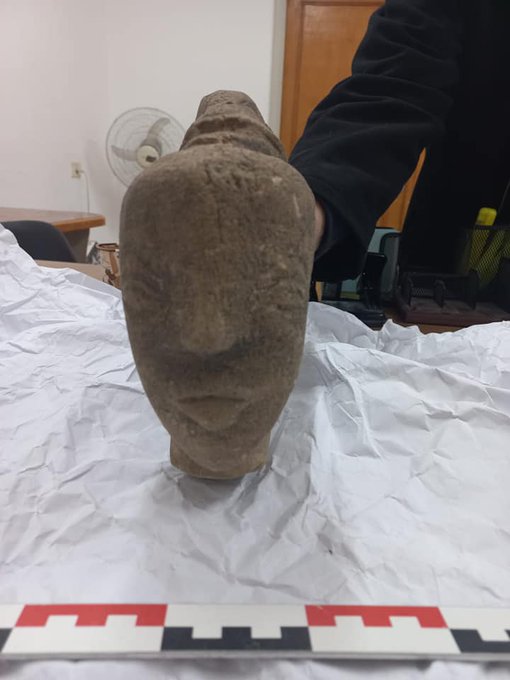 The head of the stone sculpture, which measures 22 cm tall (8.6 inches long), is carved out of limestone, but the body of the statue is missing, according to WAFA, the Palestinian National Authority news agency. The head is topped with a snake crown, a symbol of strength and invincibility used by the Canaanite gods, the agency noted.

The news agency said the sculpture represents the Canaanite goddess Anah, the goddess of love, beauty as well as of war according to Canaanite mythology.

The goddess is also known by the names of Anat, Anatu, Antit and Anath among other names. She was a major Semitic goddess worshipped in various incarnations.

Men work in a newly discovered Roman cemetery in Gaza, in this handout photo obtained by Reuters, February 17, 2022. (credit: REUTERS)

She was also worshiped in Egypt and in Ugarit, an ancient port city in northern Syria, as well as in Cyprus and Mesopotamia.

A papyri account from Elephantine, Egypt — modern-day Aswan — mentions a goddess called Anat-Yahu who was worshipped in the temple dedicated to Yahweh. The temple was built by Jewish refugees of the Babylonian conquest of Judah. There, she was even described as the wife or consort of Yahweh.

She is also thought to be the precursor of the Greek goddess Athena, as divine warrior maidens.

Bar Ilan University professor of archaeology Aren Maeir noted that the statue face was unlike any other he had seen, making it difficult to verify its origins or age despite the statement quoted in the press from the Hamas Ministry of Tourism and Antiquities identifying it as Canaanite, he said.

Regardless, he said, trying to connect the statue in any way to current modern-day politics is “irrelevant.”

“One statue here or there doesn’t change anything. There is nothing to this, basically it is a non-issue made into an issue because an article appeared with a picture. It is a little blip. I don’t even know if it is real, but if it is real, it is a very interesting find, but that is about it,” he said. “It could be something completely new or could have been brought from somewhere else.”

A massive shakeup as Meretz MK Ghaida Rinawie Zoabi resigned today from the governing coalition. Bringing the already razor-thin coalition to a minority.

1) Israel and the United States are set to simulate an all-out aerial assault on the Islamic Republic of Iran’s nuclear installations.

2) Israeli Defense Minister Benny Gantz travels to Washington for meetings with his American counterpart and U.S. National Security Advisor respectively – for talks that will focus on confronting Iran.

1) Violent riots strike Jerusalem’s eastern neighborhoods overnight – while armed clashes were reported in a number of locations throughout the West Bank.
2) The IDF had successfully downed a drone, belonging to the Iranian-proxy Hezbollah, which sought to penetrate Israeli airspace.
3) Israeli Defense Minister Benny Gantz, in an address at a Reichmann University Conference on Ukraine, talked at length about a “future war” with Iran.

Israel police thwart another terror attack after arresting a Palestinian man armed with an ax and suicide note
–
One year since operation Guardian of The Walls…is Israel on the verge of another confrontation with Hamas?
–
What does ancient garbage have to do with one of the most prominent trade routes of biblical times?