The Jerusalem Declaration on Antisemitism Is Itself Antisemitic 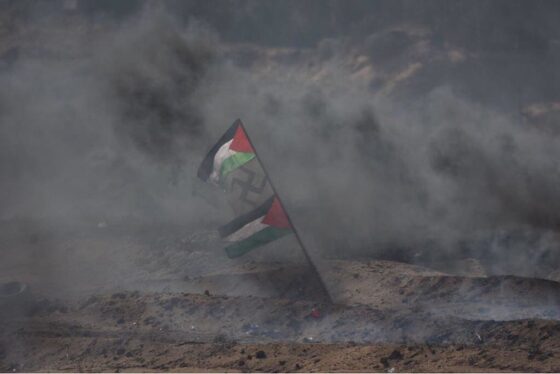 Palestinian flag with swastika displayed in the Gaza Strip during rioting in 2018, image via IDF Flickr

EXECUTIVE SUMMARY: The Jerusalem Declaration on Antisemitism (JDA), presented in March 2021, was created to replace the International Holocaust Remembrance Alliance (IHRA) Working Definition of Antisemitism, which had been adopted by 35 countries by 2020. The writers of the JDA wished to “clarify” the IHRA, which they feel is insufficiently obsequious to the Palestinians. Their real object is to use the fight against antisemitism as another weapon with which to vilify Israel.

The Jerusalem Declaration of Antisemitism (JDA) is the product of a group of international scholars of antisemitism and related fields who have been meeting since June 2020 in a series of online workshops convened by the Van Leer Jerusalem Institute. Essentially, the new document charges the International Holocaust Remembrance Alliance (IHRA) Working Definition of Antisemitism with blurring the “difference between antisemitic speech and legitimate criticism of Israel and Zionism.” As a result, the IHRA definition “delegitimiz[es] the voices of Palestinians and others, including Jews, who hold views that are sharply critical of Israel and Zionism.”

The JDA was purportedly written as a resource for strengthening the fight against antisemitism, because “there is a widely felt need for clarity on the limits of legitimate political speech and action concerning Zionism, Israel, and Palestine.” The JDA is presented as the alternative, a “corrective to overcome the shortcomings of the IHRA definition.”

Nowhere in the IHRA definition are Palestinians mentioned; nor does it mention BDS. There are, however, three clauses that can be construed as applying to the actions of Palestinians and pro-Palestinian activists. These are:

Pro-Palestinian activists and anti-Israel groups have long complained about the IHRA definition because, in the grip of their fixation on Israel as fundamentally illegitimate and their flat denial of the Jews’ right to self-determination, they reject the premise that anti-Zionism is antisemitism.

The JDA makes its political agenda clear by declaring its support for “the Palestinian demand for justice and the full grant of their political, national, civil and human rights, as encapsulated in international law.” Similarly, the JDA wishes to “support arrangements that accord full equality to all inhabitants ‘between the river and the sea,’ whether in two states, a binational state, unitary democratic state, federal state, or in whatever form.”

What the JDA fails to mention is that in Palestinian parlance, the “demand for justice and the full grant of their political, national, civil and human rights” is a euphemism for the destruction of Israel and the establishment of a Palestinian state on its ruins. Similarly, the Palestinian demand for a “binational state” or a “unitary democratic state” has been used by the PLO since the late 1960s as code for the transformation of Israel into an Arab state in which Jews are reduced to a permanent minority living on the sufferance of the Muslim majority, a status known in Islamic history as Dhimmis. In the words of Edward Said: “[T]he Jews are a minority everywhere. A Jewish minority can survive [in Arab Palestine] the way other minorities in the Arab world survived.”

The key problem with the JDA is the claim that “Criticizing or opposing Zionism as a form of nationalism” is not antisemitic. It betrays its bias by failing to reject any form of nationalism other than the Jewish one. Needless to say, such a discriminatory denial of this basic right to only one nation (and one of the few that can trace its corporate identity and territorial attachment to antiquity) while allowing it to all other groups and communities, however new and tenuous their claim to nationhood, is pure and unadulterated racism. 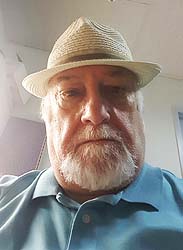 No less disingenuous is the JDA’s claim that it is not antisemitic “to compare Israel with other historical cases, including settler-colonialism or apartheid”—another attempt to discredit Israel’s right to exist on account of its alleged dispossession of the (supposedly) indigenous population. Apart from failing to indict any other manifestation of “settler-colonialism” (from the US, Canada, Australia, to most of Latin America, to earlier manifestations of this phenomenon in Europe and the Middle East), this claim ignores the fundamental fact that the Jews are not “colonial settlers” but rather the indigenous inhabitants of the Land of Israel (renamed Syria Palaestina by the Roman occupiers). This millenarian attachment was specifically emphasized by the 1922 League of Nations mandate, which tasked Britain with establishing a Jewish national home in Palestine.

If anything, it is the long string of Muslim occupiers of the Land of Israel (or parts of it)—from the 7th century Arab invaders, to the Seljuk Turks, to the Mamluks, to the Ottoman Turks, to the Egyptians, Jordanians, and newly formed Palestinians—that can be defined as colonial settlers.

As with the “settler colonist” slander, the apartheid canard is not only false but the complete inverse of the truth. Whether in its South African form or elsewhere, such as the US South until the late 1960s, apartheid was a comprehensive and discriminatory system of racial segregation, on the basis of ethnicity, comprising all walks of life—from schooling, to public transportation, to social activities and services, to medical care. None of this has ever been applied in Israel, where the Arab minority has enjoyed full equality before the law and has been endowed with the full spectrum of democratic rights—including the right to vote for and serve in all state institutions. (From the first, Arabs have been members of the Knesset.) From the designation of Arabic as an official language, to the recognition of non-Jewish religious holidays as legal rest days for their respective communities, to the granting of educational, cultural, judicial, and religious autonomy, Arabs in Israel may well enjoy more formal prerogatives than ethnic minorities anywhere in the democratic world. This is at a time when apartheid has been an integral part of the Middle East for over a millennium, and its Arab and Muslim nations continue to legally, politically, and socially enforce this discriminatory practice against their own minorities.

The JDA argues that calls for “boycott, divestment and sanctions are commonplace, non-violent forms of political protest against states. In the Israeli case they are not, in and of themselves, antisemitic,” but it does not call for boycott, divestment, and sanctions against any other nation except Israel. Quite clearly, the document is intended to legitimize the anti-Zionist boycott movement against Israel.

Ironically, after the JDA’s writers bent over backward to appease the Palestinians, a leading Palestinian group rejected the JDA. According to the Palestinian BDS National Committee, the highest authority on BDS, there are inherent flaws in the document, such as the following:

Aljazeera, the Qatari media outlet, which favors the Palestinians, published a negative article about the JDA, calling it “an orientalist text.” Mark Muhannad Ayyash, an associate professor of sociology at Mount Royal University in Calgary, Canada, authored the piece. He says the core problem with both the IHRA and the JDA definitions of antisemitism is their failure to address the “silencing and erasure of Palestine and Palestinians.” He argues that by proclaiming that the Jews have a right to their own state, it obscures the fact that “this state was established on a land that was already inhabited by Palestinians.”

Ayyash goes on to say that like the IHRA definition, the JDA sets out to determine “which kinds of anti-Zionist critiques and views constitute antisemitism, and which do not.” But “like all liberal documents that have been produced in the thick of a colonial or settler-colonial moment, this document keeps intact the colonial contract whereby the colonial masters retain the position of privilege and supremacy in voice and status over the colonized.” Ayyash calls the JDA an “orientalist text” because it does not oppose the core problem of the IHRA definition: the “silencing and erasure of Palestine and Palestinians.”

Ayyash considers the JDA an example of “covert orientalism” because “hostility to Israel could be an expression of an antisemitic animus, or it could be a reaction to a human rights violation, or it could be the emotion that a Palestinian person feels on account of their experience at the hands of the State.” Therefore, the JDA, “in supposed opposition” to the IHRA definition’s “anti-Zionism is antisemitism” premise, tells its audience—the Euro-American world—that even the Palestinians, whom Ayyash apparently believes should be absolved of such attentions, should be policed for possible antisemitism. Because the Palestinians “are so reactionary, emotional, and hostile,” they are a “source of statements and campaigns that Euro-Americans should tolerate but also remain vigilant against.”

According to Ayyash, the JDA dares to question “the reasonableness and lack thereof of Palestinians,” and that very assessment is presumptuous and Orientalist. His concern is that according to the JDA, any Palestinian who “question[s] the validity of the idea of a Jewish State for a Jewish majority“ could be characterized as “at best unreasonable and at worst antisemitic.” This is “Orientalism at its best,” Ayyash concludes.

The JDA tried to appease the Palestinians by asserting that anti-Zionism is not antisemitic. But for the Palestinians, this is splitting hairs. In their view, both the IHRA and the JDA are inherently flawed because they accept the basic premise that Jews have a right to a Jewish State. The Palestinians flatly reject the Jewish right to self-determination in any form. No matter how the pro-Palestinian writers of the JDA might want to spin it, that view is fundamentally antisemitic.

Dr. Dana Barnett is a Research Associate at the Begin-Sadat Center for Strategic Studies.