In Melbourne, a massive project aims to bring Jewish organizations, museums, communal groups, and restaurants to a new, one-stop destination. 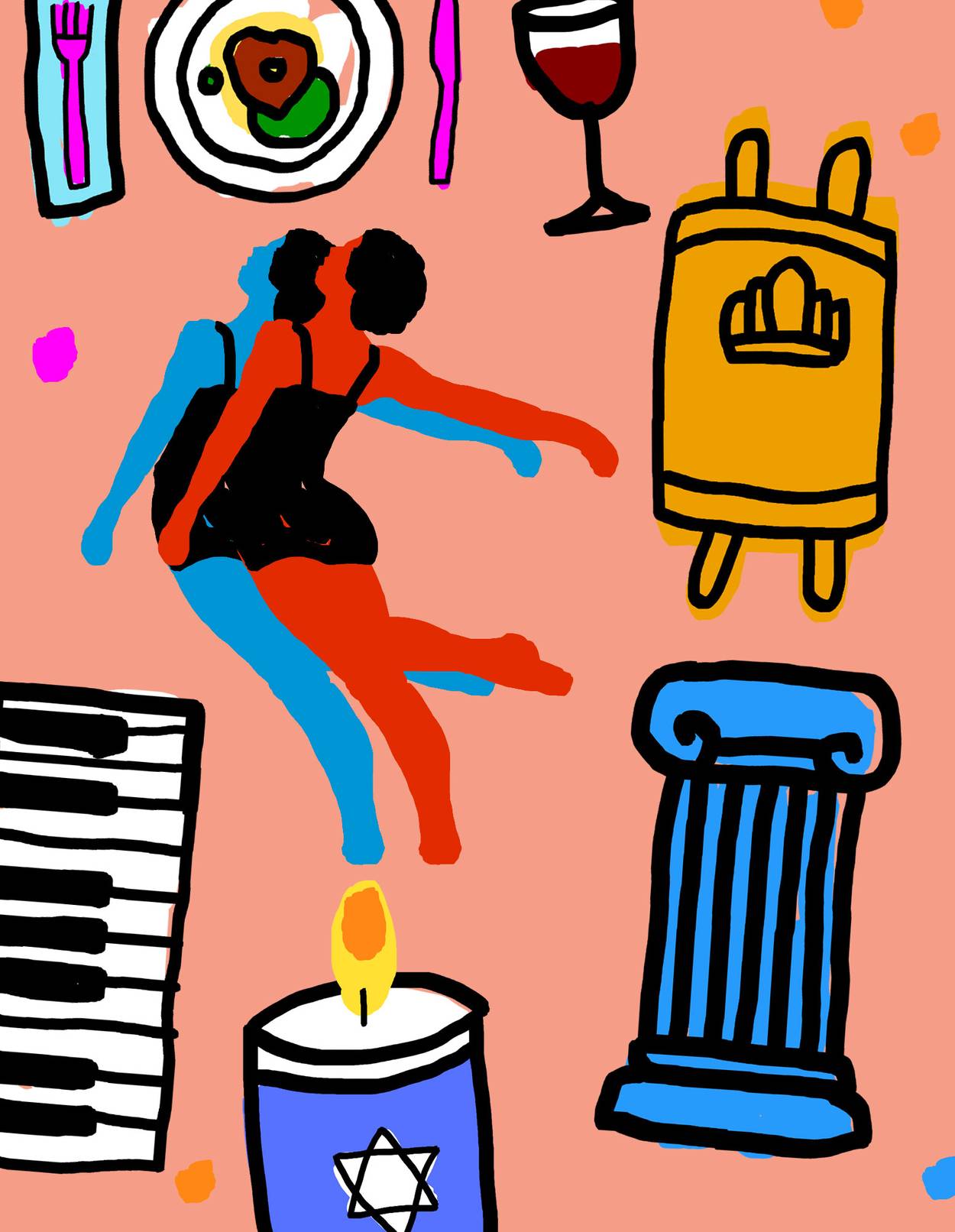 Melbourne, Australia, is home to a vibrant Jewish community. More than 60 synagogues, 10 Jewish day schools, and a dozen kosher restaurants serve some 60,000 Jews, from Bundist to ultra-Orthodox. There’s a lively Yiddish scene and an eclectic Jewish arts scene, including a Jewish film festival, a Jewish comedy festival, a festival of Jewish books, and a festival of Jewish arts and music.

Each of these Jewish cultural organizations and festivals currently operates independently, often with a small number of staff and volunteers. However, if one of the most ambitious building infrastructure projects in Australia’s history can get off the ground, things in Melbourne may soon be changing.

The proposed Jewish Arts Quarter (JAQ) will create a new, one-stop arts and cultural destination in Melbourne. With an estimated $40 million price tag, the project is centered around the creation of a hub that will include museums, education facilities, food, festivals, and open public spaces. Anchored by the Holocaust Museum, the Kadimah Jewish Cultural Centre and National Library, and the Jewish Museum of Australia, the JAQ will host Jewish theater productions and performances, art exhibitions, street busking, and literary events as well as lectures, film nights, and street festivals.

JAQ will be centred in the suburb of Elsternwick, which has a large Jewish population, and is one of three main Jewish suburbs in Melbourne. Elsternwick already has some Jewish infrastructure, but to date, many buildings have been underutilized, with some sitting on land worth millions of dollars that are only being used five to six hours per week.

“At the moment, many people in our community don’t fully appreciate our facilities because they don’t go there,” said Joe Tigel, a director of JAQ, who is also the president of Kadimah Jewish Cultural Centre and National Library. “When we raised the idea of JAQ with [the local suburban] council, they were excited. The suburban council is looking for evocative spaces and better ways of attending without everyone having to drive everywhere. The council thought it would be great for us to build a great gathering place while preserving culture. We know if we get this right, people will come in from the margins to participate.”

The construction of the JAQ will take place in two phases, with phase one relocating the Jewish Museum of Australia to 7 Selwyn St. in Elsternwick, so that it shares a building with the Kadimah Jewish Cultural Centre and National Library, which has been located in Elsternwick since the 1960s. This phase will involve selling off assets of the Jewish Museum from the space it has occupied since 1995, and rebuilding Kadimah to include both institutions in one combined, refurbished building. As a result of this move, the Jewish Museum will double in size, and Kadimah will have a new performing arts space.

Next door to this new joint museum will be a refurbished Holocaust Museum, which has been located in Elsternwick since 1984 and, independent of the JAQ project, is currently undergoing major renovations. These facilities will cater for increased capacity for educational and communal programs.

The new combined site “will be transformed into a purpose built, multi-use facility—the epicenter for Jewish arts, culture and life in Melbourne,” said Kylie Appel, the head of engagement at JAQ. ”JAQ will increase participation and allow both organizations to reimagine the future of arts and culture in a new state of the art facility to cater for the growing demands and needs of the community.”

Phase two of the project will involve the creation of new restaurants and cafes (some of them kosher) as well as the establishment of a coworking and performing-arts spaces in the streets surrounding the newly refurbished museums. All the organizations that are part of JAQ will continue to remain independent, but the hope is that the proximity of so many organizations and the combination of two museums next door to a refurbished Holocaust Museum will lead to a great deal more collaboration, resource sharing, and joint programs. 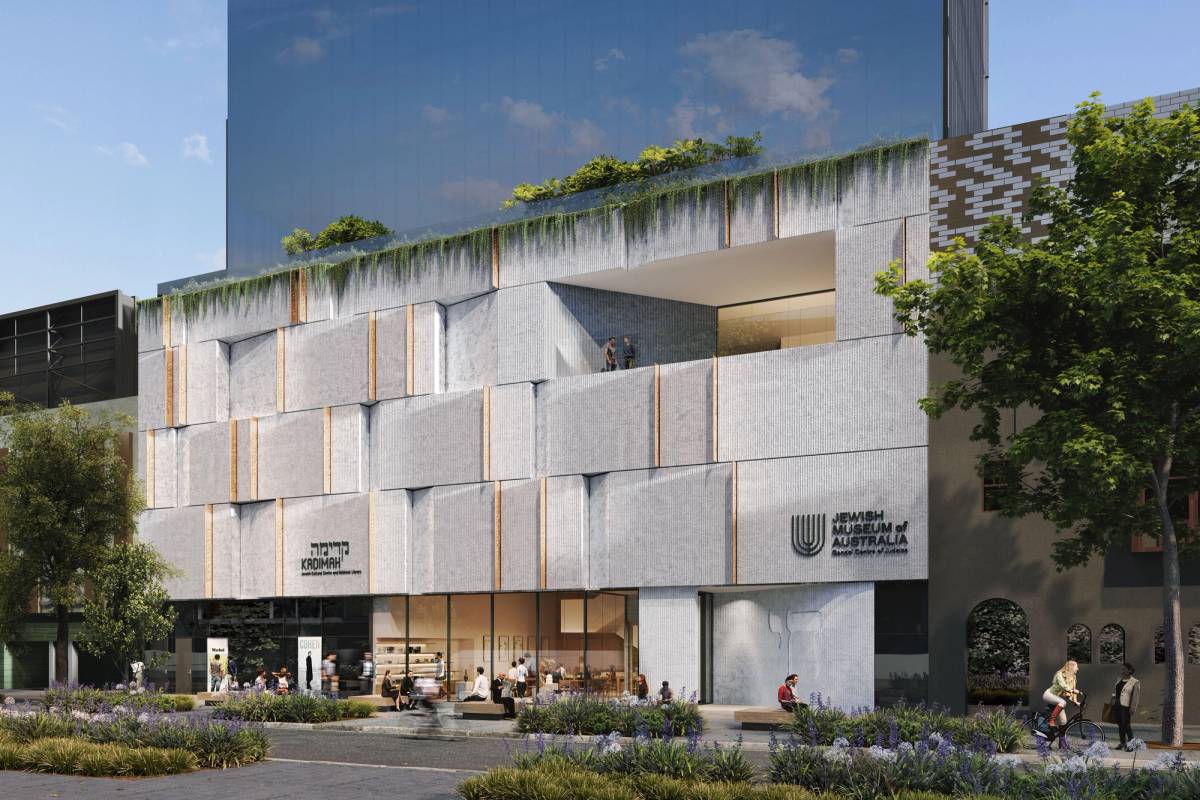 An exterior rendering of the proposed Jewish Arts Quarter in Elsternwick, MelbourneCOURTESY JAQ

“It’s not just about a building, we are creating great spaces for our community and beyond” said Tigel. “When we started this project [about five years ago], we had a vision that you don’t need a ticket to something in order to come to visit JAQ. If we do this right, we will have an environment where people will want to come and be there. That’s a vision that takes belief and discipline.”

So far, the Jewish Arts Quarter has enthusiastic support from the local city council for phase one, as well support from the state and federal government. The state of Victoria, where Melbourne is located, has pledged 5 million Australian dollars. JAQ also has backing from one of Australia’s wealthiest philanthropic families, the Gandels, who have committed a generous grant from their foundation to support phase one of the JAQ infrastructure plan. In addition to these funds, the team at JAQ is looking to raise in excess of AU$30 million through a mix of community fundraising and philanthropy.

The hope is that similar to other ambitious projects like the JW3 in London or the Schwartz/Reisman Centre in Toronto, which are similar in scope to JAQ, the precinct will revolutionize the way Jewish people of all ages gather in Melbourne, offering a full array of programming most nights of the week and on weekends.

“JAQ will provide a place for meaningful connection through the facilitation of Jewish life, arts and cultural experiences in all its forms. Now more than ever we need projects like JAQ to bring people together,” said Appel. “The diversity of Melbourne needs a multicultural beacon to help build bridges and create pathways to tolerance, respect, understanding and sense of community belonging. We hope that JAQ will become a contemporary central hub and go-to place—the cool place to hang. When you have a space that’s welcoming, you embrace the broader community through knowledge and engagement experiences. This is the future of outreach that is inclusive to all.”

After the construction of these buildings finishes, and phase two begins, the idea is that JAQ will continue to exist as an entity that oversees the scheduling of activities in the Jewish Arts Quarter, and manages the tenancies of restaurants, cafes, and the coworking spaces to ensure that the area remains a vibrant hub.

“Having the two museums together is an opportunistic element,” said Tigel. “We will have tens of thousands of students come through, where they will learn about Holocaust studies, and then go to the Jewish Museum and learn more about the Jewish communities in Melbourne.”

Appel added: “Consolidating the key assets makes a lot of sense. Organizations are continually evolving, and we see JAQ providing endless possibilities for collaboration and sharing of resources and facilities.”

If the project is successful, it will represent a major shift that almost no other cultural or religious group in Melbourne, a multicultural city of 5 million people, has been able to achieve.

“In Melbourne we have missed some opportunities to create better places,” said Tigel. “In the 1960s Kadimah was the best attended community center in Melbourne. People who came to Melbourne had immigrated out of trauma, and they needed that sense of place that was not that different from Europe albeit shtetls and towns. [In the 21st century] I don’t think anyone wants to do a segregation model. In the diaspora, we face many challenges, including declining engagement, but you need to create an environment where you feel you are part of it. There are too many facilities that don’t serve their purposes anymore.”

Two groundbreaking studies conducted on the Australian Jewish community—Gen08 and Gen17, facilitated by Monash University—provided some of the most comprehensive data on the Australian Jewish community, seeming to support the idea that new ways of engagement are necessary. In Gen17, the data noted that only 35% of respondents in Melbourne said that they feel “very connected” to their Jewish identity. JAQ aims to change this.

“The vast majority of Jews are quite secular, and we feel that JAQ fills a really important role in our community, for people who don’t go to synagogue, for people that don’t go to a Jewish school but they come to JAQ and feel a sense of belonging,” said Gary Samowitz, the strategy and fundraising director at JAQ.

But an infrastructure project of this scope is not without some criticism or controversy. As one Melbourne community leader who declined to be named on the record said to me, “Why are we building another f–king edifice when we cannot afford Jewish school fees in Melbourne? We are all busy empire-building and we should be empire-deconstructing.”

However, Jeremy Leibler, the president of the Zionist Federation of Australia, which is not part of the JAQ, disagreed with this assessment. “The Jewish Arts Quarter deals with arts and culture. The school’s affordability discussion is not related to this project. The community has capacity to solve the Jewish education crisis and support Jewish arts projects. They are not mutually exclusive.”

While the organizations and businesses that will be participating in phase two are not yet finalized, JAQ is open to speaking with any organization that would like to join the arts precinct. The team at JAQ is keen to get as much community support as possible.

“We meet with all Jewish organizations one on one. We want their buy-in. We want them to feel a sense of ownership. This is a collaborative process. We want over 1,000 people to give feedback in our upcoming survey,” said Samowitz.

Tigel sees the potential for greater inclusion of other faith groups and ethnicities in the JAQ as a bonus. “Non-Jews will be at the JAQ every day, visiting museums, eating at restaurants, coming to festivals,” he said. “We see this project as promoting the Jewish community, stemming the tide of antisemitism, and creating bonds between ethnic communities. It’s a bit simplistic to say build and they will come. But I really believe it. If we build it and have a meaningful cultural vision, the people will come.”