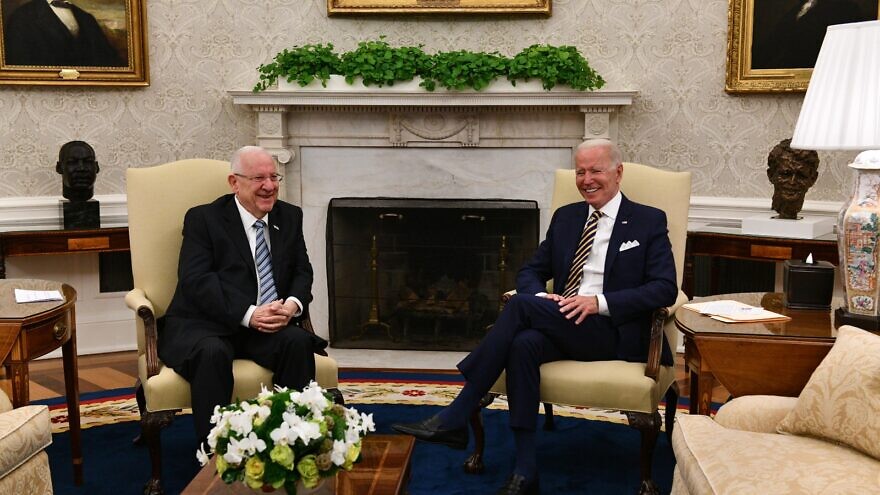 The president pledged that Tehran will not acquire nuclear weapons on “his watch.” But if he reinstates Obama’s deal the crisis will occur after he leaves office.

(June 30, 2021 / JNS) Outgoing Israeli President Reuven Rivlin met with U.S. President Joe Biden in Washington this week and Foreign Minister Yair Lapid met with Secretary of State Antony Blinken in Rome. The theme of both meetings as far as the Israelis were concerned was happiness with the Biden administration.

As far as Rivlin and Lapid are concerned, any problems facing the alliance were the fault of former Prime Minister Benjamin Netanyahu, whom both men despise despite coming from different ends of the Israeli political spectrum. Lapid went out of his way to declare that “mistakes were made” by Netanyahu, whose policies toward Democrats he described as “shameful and dangerous.” Rivlin was equally eager to portray Biden as a reliable friend of Israel who should be taken at his word when he makes promises about protecting its security.

That’s exactly what the administration wants to hear even if the attempt to depict the Democrats as having been wronged by Netanyahu is inaccurate. After all, it was former President Barack Obama who undermined the alliance between the two democracies with his appeasement of Iran which Netanyahu was right to oppose. And castigating Netanyahu for embracing the historic tilt of the Trump administration and the Republicans toward Israel is equally senseless.

But dunking on Netanyahu isn’t the real objective of the current Israeli government no matter how much its members may enjoy it. Their goal is to use the change in power in Jerusalem to somehow reset relations with the U.S. so as to sway Biden to avoid going down the same reckless path on Iran as Obama. And if toadying to Biden and Blinken is all it would take to accomplish that important mission, then they are right to attempt it.

The top foreign policy priority of any Israeli government, no matter who is at its head, is to stay as close to their superpower ally as possible. Trying to reinforce the notion that support for Israel is a matter of bipartisan consensus is also vital even if the clear split among Democrats on the issue — and not anything Israel and the pro-Israel community has or hasn’t done — is what is undermining it.

Even those most inclined to regard the generational shift among Democrats as irreversible need to understand that the Israelis should do what they can to reach out to the still considerable portion of that party that is friendly to the Jewish state. The aging Democratic establishment that has strong ties to Israel is clearly more afraid of the “Squad” and their party’s left-wing base, who buy into intersectional myths about Israel being an “apartheid state,” than they are of the pro-Israel community. But for now, Biden and establishment figures like House Speaker Nancy Pelosi (D-Ca.) and Senate Majority Leader Chuck Schumer (D-N.Y.) are the ones with the most influence and Prime Minister Naftali Bennett, along with Lapid, needs to cultivate them. Kind words and boilerplate rhetoric about preserving the alliance from Biden and Blinken are to be welcomed, not least because they serve to discourage their party’s anti-Israel left-wing celebrities like Reps. Ilhan Omar (D-Minn.) and Alexandria Ocasio-Cortez (D-N.Y.) and those foreign powers like Iran who hope to isolate and eliminate the Jewish state.

But a concerted effort to curry favor with the administration shouldn’t cause anyone, least of all Bennett or Lapid, to succumb to wishful thinking. That’s because Biden’s promises about Israeli security and the threat from Iran that pleased Rivlin so much are essentially worthless.

The most disappointing comment to come out of these discussions is one that many friends of Israel are hoping to hang their hats on: Biden’s promise in which he said, “What I can say to you is that Iran will never get a nuclear weapon on my watch.”

That remark made for hopeful headlines in Israeli publications after it was made. Indeed, it would seem to be exactly the sort of pledge that those who care about the effort to halt the Islamist regime’s push not just for nukes but for regional hegemony wanted him to say.

But the catch is the “on my watch” part of the promise.

The weak agreement Obama (with the enthusiastic support of supposedly pro-Israel figures like Biden and the rest of the current president’s foreign policy team) reached with Iran had many flaws, including ignoring Iran’s terrorism and building of illegal missiles. But the worst was its time frame. The deal which went into effect in 2015 was loaded with sunset clauses that the Iranians insisted upon. These provisions caused all of the restrictions on its nuclear program to expire within 10 to 15 years. Obama convinced most Democrats, including many who claimed to be strong supporters of Israel, that kicking the can down the road in this fashion was the best deal that could be made. They, along with Obama’s dupes in the media, accurately labeled an “echo chamber” by his aide Ben Rhodes, also bought into the idea that the only choices America faced were appeasement or war.

But six years later, the clock is ticking and the West needs to face up to the fact that by the end of the decade the Iran deal will expire and the Israel-hating theocrats that run it will have a legal path to a nuclear weapon. That’s something that former President Donald Trump understood when he withdrew from the deal and embarked on an effort to force Iran to renegotiate a pact that would permanently foreclose the nuclear option as well as halt its support for terrorism and missile building. In doing so, he debunked Obama’s false choice with a successful policy of sanctions that put “maximum pressure” on Iran that crippled its economy but avoided war.

Biden and Blinken have acknowledged this problem. They say they will reinstate the nuclear agreement first and then cajole Iran into negotiating and signing a new deal that will do exactly what Trump sought to do while preventing Tehran from engaging in any nuclear shenanigans in the meantime.

But the Israeli officials who are both kissing up to the Democratic administration, while also quietly lobbying them to change course, know that plan is a mission impossible.

Simply put, the inducements, including the lifting of sanctions, that the U.S. is offering Iran to get them back into the deal means it is giving up all of the leverage over the regime it inherited from Trump’s “maximum pressure” campaign. Once the 2015 pact is reinstated and Iran is able to reap the financial rewards involved in the lifting of sanctions, Biden will have no way to force the ayatollahs to reverse their pledge never to renegotiate its terms.

That will mean that, Iran’s consistent cheating on the agreement notwithstanding, Biden will be able to fulfill his promise about them not getting a nuclear weapon on his watch even if he runs and then wins re-election and serves until January 2029. It will be the American president who is elected in November 2028 who will be faced with a nuclear Iran on his or her watch.

That’s why all the fine promises being made this week about Israel’s security being sacrosanct, and nothing horrible happening while Biden and Blinken have anything to say about it, are as worthless as Obama’s claim that his signature foreign policy achievement would allow Iran a path to “get right with the world.” It is the president’s bad policies that matter, not his friendly words. Unless Biden changes course on Iran, Israeli efforts to ingratiate those Democrats who still care about their security will be a fool’s errand.