The Defenders of Mariupol

Branding the Azov Battalion as ‘neo-Nazi’ long after it shed its far-right origins is part of a deafening corruption of public discourse. 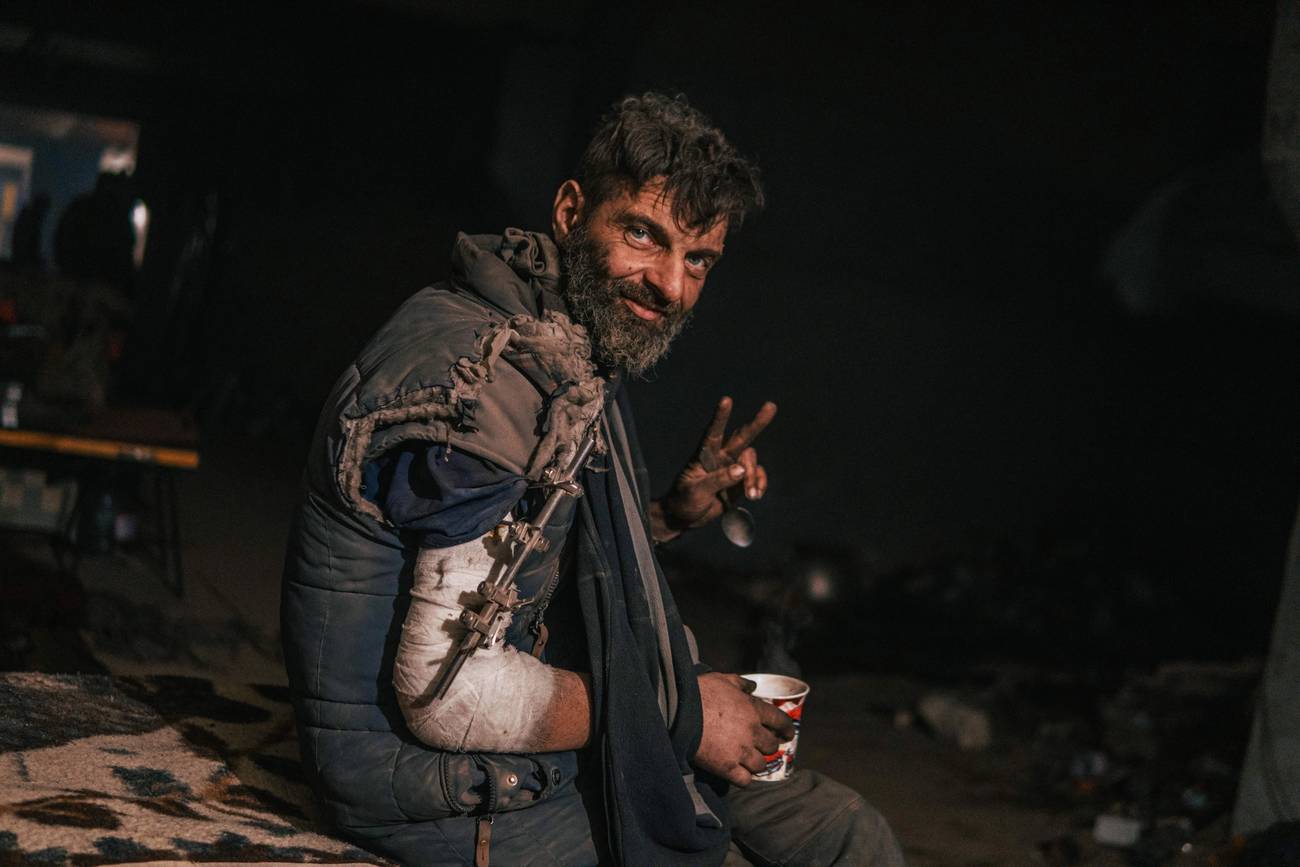 A photo released on May 10, 2022, by the Azov Battalion, showing an injured Ukrainian serviceman inside the Azovstal iron and steel works factory in eastern Mariupol, UkraineDMYTRO ‘OREST’ KOZATSKYI/AFP VIA GETTY IMAGES

The Ukrainian port town of Mariupol is the hometown of the Azov Battalion, a special operations detachment of the Ukrainian National Guard with a past neo-Nazi association—which is one self-evident reason the Russian high command chose the city to serve as an example for Vladimir Putin’s “denazification” campaign. In the last few months, the siege of Mariupol has witnessed the most thorough destruction of a European city since the bombing of Dresden. In the process of committing numerous war crimes (and likely crimes against humanity), the Russian army leveled the city’s housing stock to the ground. The fighting reportedly killed tens of thousands of civilians, and most of the city’s nearly half million residents have fled, even as tens of thousands more remain trapped in basements and bunkers under ruins without access to medicine, water, electricity, or basic health care. These include the parents of several of my friends and acquaintances—incidentally ethnic Jewish and Armenian citizens of Ukraine. One, the Lithuanian filmmaker Mantas Kvedaravičius, was killed in Mariupol as he was filming the war.

The Ukrainian army put up remarkable resistance to the Russian invasion of the city, which of course was numerically and technologically superior. In the process, the defenders of Mariupol were reported to have tied down at least 12 Russian battalion tactical groups. After the Russians laid siege to the city, many surviving Ukrainian fighters retreated into the Azovstal iron and steel works, which provided sanctuary to between 1,000 and 2,000 besieged Ukrainian soldiers—a third of whom were reportedly wounded. These soldiers and service members belonged to the Ukrainian Marines, the Border Guard, the army, and territorial defense battalions, as well as the Azov Battalion.

While talks were in progress to free those pinned down in Azovstal over the last few weeks, Russian artillery and cruise missiles continued to bombard the compound daily, and apparently massacred many of the soldiers and civilians taking shelter inside of it. The survivors vowed never to surrender and pleaded with the Ukrainian government and the international community for intervention and extraction. (According to available reports, individual members of the Ukrainian forces who surrendered to the Russians were summarily executed.) On May 11, the wives of Azov soldiers made a trip to the Vatican to plead with Pope Francis for humanitarian intervention.

A Jewish Ukrainian solider within Azovstal, Vitaly Barabash, called upon the Israeli government to intervene, and on May 12, Azov Deputy Commander Svyatoslav Palamar gave an interview to Haaretz playing up the Ukrainian-Israeli connection. (“Like in Israel, there is also terror against us. We are not Nazis.”) Palamar pleaded for more aide from the Jewish state and the rest of the civilized world to rescue his besieged unit. “The Azovstal plant is already being compared to Masada,” Haaretz informed Palamar, “where Jewish fighters who rebelled against the Roman Empire barricaded themselves in, and in the end all of them were killed.” Palamar appeared to agree with the analogy—which is not normative behavior, needless to say, for a “neo-Nazi” group.

On Tuesday, after prolonged negotiations involving foreign diplomats at the highest levels, the civilians hiding inside of the metallurgical plant were reportedly evacuated, and the wounded Ukrainian soldiers are being exchanged for Russian POWs. Azov Commander Denys Prokopenko stated that the Ukrainian forces in Azovstal had “fulfilled their orders and had constituted a distraction to the Russian army for 82 days.’’ The Battle of Mariupol seems to have concluded.

The Azov Battalion was originally one of many volunteer formations forged in 2014 in order to resist Russian proxies and the Russian regular army in eastern Ukraine. At the time, the hollowed-out Ukrainian state had no capacity to fight back against Moscow. As innumerable critics with limited understanding of Ukrainian politics never tire of pointing out, the founder of Azov, Andriy Biletsky, is indeed a figure who holds racist and white supremacist views. Early Azov was home to all sorts of freakish characters, and Biletsky certainly sought and maintained relationships with neo-Nazi groups throughout Russia and Europe. Like many other private militias of the early post-Maidan period, there were also allegations of criminal activity against the recently demobilized men of Azov who were often used as hired guns to settle local conflicts.

In the summer and fall of 2014, Azov distinguished itself by the ferocity with which it successfully fought against the Russian-led separatists then attempting to occupy Mariupol. Paradoxically—at least for purveyors of Kremlin propaganda, which holds that Ukrainians have been oppressing ethnic Russians—most Azov members are in fact Russian speakers and disproportionally hail from the Russian-speaking regions of Ukraine. Even more ironically, according to my friend Anton Shekhovtsov, the preeminent scholar of the Russian and Ukrainian far right, “On average they speak better Russian than the Russian invaders. This fact alone dismisses blatant Kremlin lies about Azov allegedly fighting against Russian speakers in eastern Ukraine.” In June 2014, when Azov helped liberate Mariupol from pro-Russian forces, it “proved not only Azov’s combat effectiveness but also their truly pro-Ukrainian position. Because of its proven fighting abilities, Azov started to attract more volunteers, and many of them had no political background at all.”

There were certainly valid concerns about radicalism and warlordism at the time, and the far-right elements within Azov were distrusted by the majority of the public, as well as by senior figures in the government. When Azov was incorporated into Ukraine’s National Guard in the autumn of 2014, placing it in the chain of command of the Interior Ministry, then-President Petro Poroshenko was rightly fearful of the potential for disgruntled or uncontrollable veterans of Azov and other volunteer groups to pose a possible threat to the state. Poroshenko ensured that members of the security services were integrated into the battalion in order to keep an eye on the men identified as potentially independent-minded loose cannons.

These days, the ranks of the battalion are drawn from the regular, countrywide pool of military and national guard recruits. The influence of Biletsky dissipated as soon as he left Azov in October 2014; his later attempts to create a parallel movement, the “National Corps,” were the result of his de jure exclusion from the military and his declining influence. The confederation of right-wing political parties that he corralled into a common platform during the 2019 elections failed to win more than 2% of the national vote, while the Jewish presidential candidate, Volodymyr Zelensky, won with 73%. The original, post-Maidan composition of Azov was quickly diluted, and the ghost of Biletsky was replaced with regular officers of the Interior Ministry. By 2017, the battalion as a whole remained distinguished—but for its martial prowess, not for some distinct political ideology. It was naturally around this time that the Ukrainian government found itself under increased international pressure, including from the U.S. Congress, for its “normalization” of Azov.

It is indisputable that Azov was home to all sorts of nasty characters when it was first founded, and like many fighting forces (including America’s), it doubtless still contains some white supremacists, racists, and chauvinists today. But it is no longer a practically or ideologically racist organization, any more than the U.S. Army could still be called segregated after 1948. I myself have drunk with Scandinavian former volunteer members of Azov—they were Pagans and Odinists, and had the rune tattoos to show for it. A Swedish sniper who had served in the battalion once told me that his experience in the unit, which included service alongside ethnic Greek, Turkish, Georgian, and Azerbaijani soldiers, transformed him from a white racist into a conservative nationalist—progress! A Donbas-born Jewish political consultant with whom I regularly drink in Kyiv remains a proud Azov reserve officer.

When I recently asked another Azov officer about the battalion’s reputation for racism, he objected to the premise. “We are not racists,” he insisted without irony. “We have right-wing patriots serving with us of every race! Every creed! Every color! Every religion!” But even the unit’s “right-wing” ideological heritage has diminished, as it’s been forced by circumstances to professionalize. If Azov began in 2014-15 by drawing in volunteers attracted to its ideology or reputation for fierce fighting ability, it now depends for recruits on allocations by the Interior Ministry, which tightly oversees its promotions and officer commissions.

Understanding the actual trajectory of Azov over the last eight years is important, because ignoring it plays into decades-old tropes of Ukrainians as inherently antisemitic fascist collaborators. That does not excuse the canonization in some quarters of Nazi collaborators or interwar Ukrainian ultranationalists like Roman Shukhevych or Stepan Bandera. But nor is it helpful, just, or sane to hold these brave, patriotic fighters—who for months were fighting in Mariupol and who for weeks now have been trapped in the Azovstal iron and steel works—responsible for the legacy of some of their country’s ancestors from the 1940s. Perhaps it is too much, or too strange, to call Mariupol the new Masada, and thus Azov the new Israelites. But it is certainly not too much to chant the glory of every Ukrainian hero who continues to resist Russian imperialism and barbarism.

Vladislav Davidzon is Tablet’s European culture correspondent and a Russian-American writer, translator, and critic. He is the Chief Editor of The Odessa Review and a Non-Resident Fellow at the Atlantic Council. He was born in Tashkent, Uzbekistan, and lives in Paris.