Fighting Anti-Semitism With A Millennial Focus 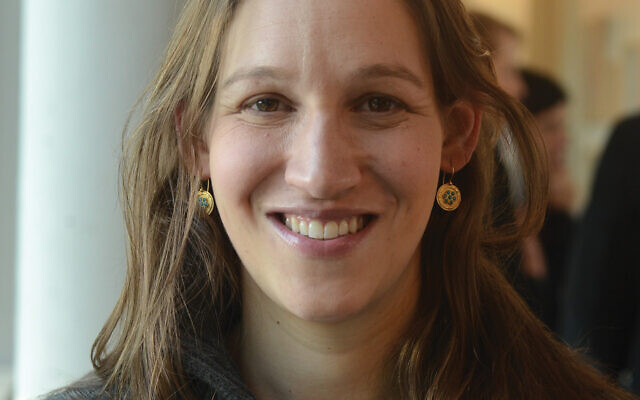 Rachel Fish: “Calls for the destruction of Israel are absolutely a form of anti-Semitism.”

Ten months after Robert Kraft, philanthropic owner of the New England Patriots football team, won the $1 million Genesis Prize and announced that he would use the prize money to establish a new organization to fight anti-Semitism, Rachel Fish was recently named the first executive director of his Foundation to Combat Ant-Semitism.

Fish, who started her job last month, had worked at the Paul E. Singer Foundation in New York, where she served as a senior adviser and resident scholar of Jewish/Israel philanthropy. She previously was executive director of Brandeis University’s Schusterman Center for Israel Studies. Fish earned a doctorate in Near Eastern and Judaic Studies from Brandeis, with a dissertation about the idea of binationalism and alternative visions for constructing the State of Israel. The Jewish Week interviewed her by email. This is an edited transcript:

Q: The Jewish community has no lack of established organizations dedicated to cataloging and fighting anti-Semitism. Among them, the ADL and Simon Wiesenthal Center. Why do we need another one?

A: As anti-Semitism is on the rise, no individual or organization can alone solve this problem. There is always an advantage to new eyes on the problem, along with additional resources, brain power and strategies. Our goal is to focus on combatting this hate in very specific ways through targeted avenues; our target audience is 35 years old and younger, and we intend to focus on leveraging social media while making efforts to address online hatred.

The more we create informed citizenry who are empathetic and recognize the complexity of history, the better off we are. Education alone is not enough. We also have to be willing to clearly expose those who hate, label from where the anti-Semitism emerges, and demand accountability for those who act in a prejudicial and discriminatory manner towards the Jewish people, Judaism and the Jewish state.

In the U.S. recently, White Plains and Brooklyn. In Germany, Halle. Is anti-Semitism getting worse, or is the media coverage, especially via the internet, getting better?

Is anti-Semitism getting worse? I would argue yes, and the confluence of sources share a common thread – the elimination of Judaism, the Jewish people and the Jewish homeland. The phenomenon of anti-Semitism was never erased from our societies.

Even within the American Jewish experience, anti-Semitism has always existed. In the U.S. and Europe today, this hatred manifests itself not only among white supremacist movements but within hard-left progressive circles and within radical Islam. We can’t allow anti-Semitism to become politicized and have a debate over one form of anti-Semitism being worse than the other. They are all bad.

Do you accept the premise that anti-Zionism and anti-Israel animus is automatically a form of anti-Semitism? Will defense of Israel be part of your mandate?

Calls for the destruction of the State of Israel are absolutely a form of anti-Semitism. This is very different from discussing Israeli policy and debating particular ideas of various Israeli governments and decisions. Israelis engage in those debates on a daily basis. But that is quite different than questioning Israel’s right to exist. If organizations call for the delegitimization of the State of Israel and the demonization of Israel, that is anti-Semitism. Too many people from the radical left and from within the academy cloak their political positions and animus under the guise of academic language, academic freedom and political discourse, but they are simply calling for Israel’s destruction.

You appear to have had a typical, middle-class upbringing in this country. Whence comes your interest in anti-Semitism?

I grew up in a small town in the northeast corner of Tennessee — Johnson City — in the foothills of the Smoky Mountains. In many ways growing up in Johnson City was incredible; there was a real sense of community and value placed on knowing your neighbor and caring for one another. But when you are part of a small Jewish community, you learn at an early age what it means to be different and how you need to be able to articulate that, whether it is over a mundane reason like why you don’t eat pepperoni on your pizza at the sleepover or something more serious like why you don’t believe in Jesus.

My parents made sure we understood our Jewish heritage and identity and that we had pride in our people. My father, a retired pediatrician, explained every year to the School Board why you can’t have prayer in the public school. During graduate studies at Harvard Divinity School, I felt a responsibility to stand up against hate money that was coming from the United Arab Emirates and attempting to influence how Islam would be studied. I led a campaign to seek reputable funding.

The influence of foreign funding from the Arab world into universities has an enormous impact on what is taught about Judaism, Israel, and how many faculty in Middle East Studies programs feel empowered to abuse their classrooms for political purposes. This issue has not been adequately addressed; the influence of funding often taints scholarship and trickles into the K-12 public education space.

Combatting anti-Semitism requires something more powerful than merely fighting against ignorance and hatred. Judaism and Jewish life do not survive with a victimhood mentality; rather, we must instill in our community, particularly our Jewish youth, a sense of pride in our Jewish cultures, traditions, and civilization.