Return of the Thief

Rokhl’s Golden City: A new, belated translation of Sholem Aleichem’s ‘Moshkeleh’ raises the question of what gets left out of the Yiddish canon. 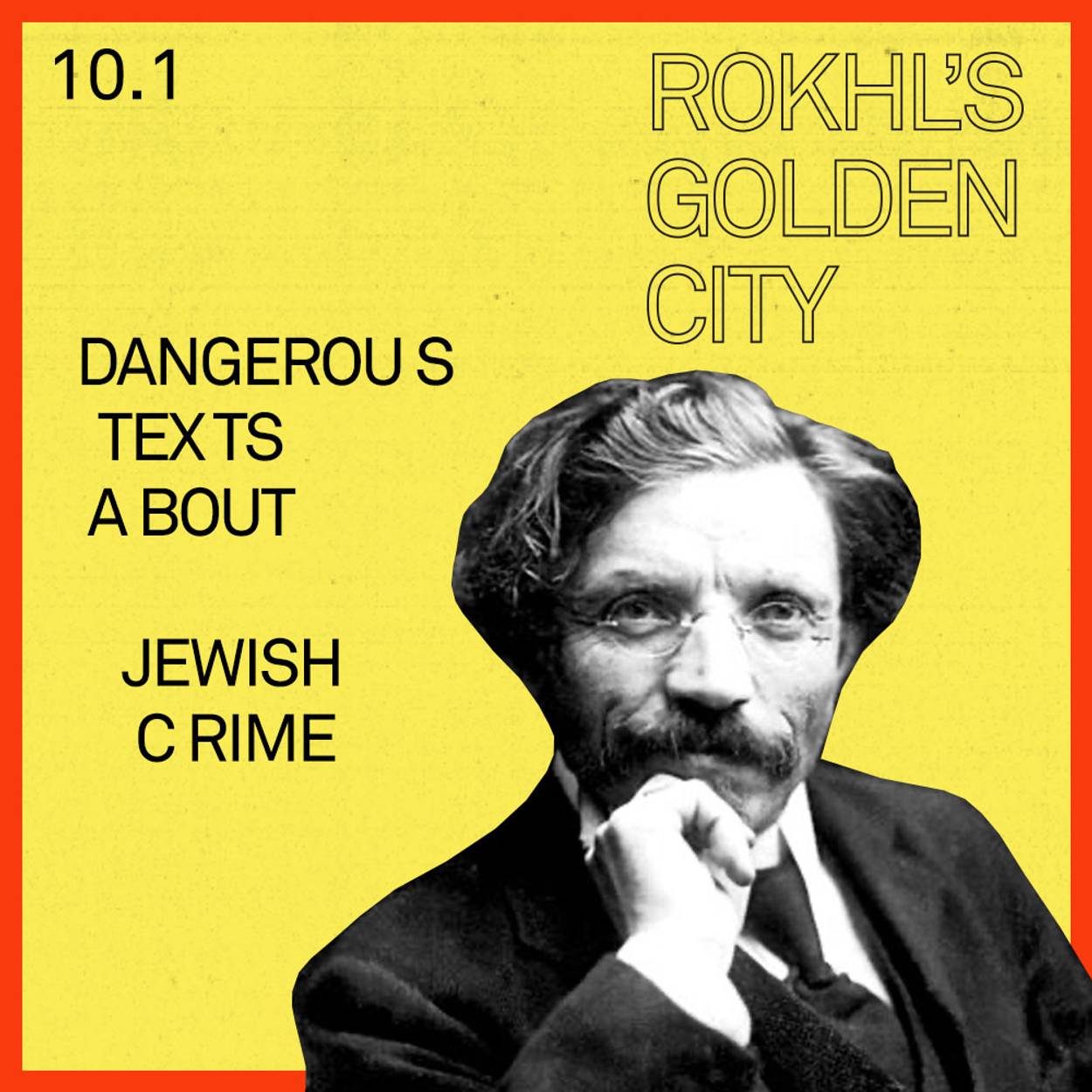 If tall stature, broad shoulders, sturdy legs, and a big head of curly black hair makes one handsome, then one can say that our hero was a handsome young man.” This particular romantic hero’s name is Moshkeleh, and he is an outlaw, one whose long exile from the Yiddish canon has finally come to an end.

Among the bumper crop of new and important Yiddish literary translations which have arrived in 2021, we find an intriguing “new” novella by Sholem Aleichem, Moshkele Ganev, here translated as Moshkeleh the Thief. It’s a text that was previously excluded from Sholem Aleichem’s definitive collected works, and is now translated into English for the first time by Curt Leviant.

Moshkeleh the Thief is a slim volume, with many of the same themes Sholem Aleichem would develop in his Tevye stories. Instead of the long-suffering, pious family man, Tevye, here we follow our titular thief, Moshkeleh. He never hesitates to protect his fellow Jews with his fists, even as those same Jews in turn regard him as a marginal figure, unworthy of a marriage match with their daughters.

Sure, Moshkeleh didn’t learn much in his Hebrew classes, but he can snap an iron horseshoe in half like it was a bagel. He can ride a horse like a Cossack, administer a beating when necessary, and, as the son of a thief, he’s an accomplished thief himself. Not that Moshkeleh would use such a word.

The opening pages of the novel firmly establish Moshkeleh as a man apart from his community. He even speaks a different language! One isn’t a pickpocket, but a “nimble fingers.” One doesn’t steal a horse, but “whistles” it “out of the shed.” In what is likely its first recorded appearance in Yiddish literature, Sholem Aleichem employs the “piquant” argot of Yiddish thieves in telling Moshkeleh’s story. (Given its mere 57-page length, the reader is all the more disappointed that publisher JPS chose not to make this a bilingual edition, which would allow readers to easily dive into the juicy language of the original.)

Moshkele Ganev originally appeared as serialized newspaper stories and that origin is to its benefit, making it a quick and colorful read, with plenty of cliffhangers to keep the reader engaged. We can’t help but like Moshkeleh, a good-natured hunk who only wants to do the right thing, despite his profession. He even gets a (mostly) satisfying romance and (almost) happy ending.

When it was collected and published as a book, Moshkele was well-received. Sholem Aleichem himself was pleased with it and considered it a milestone in his career. So why was it subsequently omitted from his collected works? Leviant notes that Sholem Aleichem has been translated into more than two dozen languages. His work has inspired an enormous body of critical literature in multiple languages. Moshkele, however, has inspired precisely one scholarly article.

Moshkele Ganev was published in three Yiddish editions, one as late as 1941, in Moscow. We’re not talking about a “lost” text here. And yet, for an author as revered, studied, and comprehensively collected as Sholem Aleichem, the absence of such a text from both “canon” and critical literature, raises eyebrows.

In his introduction, Leviant writes that, until Moshkele’s publication in 1903, Yiddish authors had been restrained by norms of eydlkayt (refinement) and an unwillingness to portray “people on the fringe of respectability.” With Moshkele, Sholem Aleichem took Yiddish literature in a new, more realistic, direction. Not only did he portray Jewish criminals with sympathy, he was the first to portray them speaking their own “language.”

I don’t claim to know any more than Leviant about the specifics of Sholem Aleichem’s literary afterlife, but I do think Leviant is too quick to pass over the import of his use of “thieves argot” in the text. In his classic study, Jewish Self-Hatred, author Sander Gilman demonstrates the deep and nefarious associations between thieves’ argot and German antisemitism. By the early 18th century, Christian German speakers had come to see Yiddish as a language in and by which Jews hid their criminality. Thieves’ cant and Yiddish both mixed German and Hebrew-Aramaic elements, thus, in the mind of many German speakers: “The language of the Jews was the language of thieves, for the Jews were quintessential thieves.”

In Jews and Crime in Medieval Europe, Ephraim Shoham-Steiner describes how various Jewish Enlightenment writers avoided the topic of Jewish crime. In one instance, a Jewish scholar of medieval responsa deliberately removed reference to Jewish and non-Jewish criminals working together: “Given the heated debate about the role of the ‘Jewish language of thieves’ in the 1870s, this was probably prudent at the time.” Is it possible that even decades later, the mere presence of Yiddish thieves’ argot in a text was considered too dangerous for inclusion?

According to the very literary mythology he created, Sholem Aleichem is an avatar of modern Yiddish literature. As noted above, he has been copiously translated, widely studied, and remains beloved today, even by those who have never read him. But that modern literary afterlife makes him among the most anomalous of Yiddish authors, the majority of whom remain entirely untranslated and understudied. As more resources are put into translation, however, more stories have surfaced of writers who were cut out of the modern Yiddish canon, even before the disappearance of the mass Yiddish reading public.

Salomea Perl, for example, was a member of I.L. Peretz’s literary circle in Warsaw. Peretz encouraged her to write short stories in Yiddish and was among the editors who published her. Peretz was an important champion of her work … until he wasn’t. The cause of the break between Peretz and Perl is still unknown. But the result is that without anyone to champion her literary legacy, Perl’s gorgeous stories remained buried in the pages of 100-year-old newspapers, until they were collected and translated by Ruth Murphy in The Canvas, a bilingual edition of Perl’s stories published earlier this year.

Jonah Rosenfeld is another author whose literary afterlife was cut short both by literary tastemakers as well as the near impossibility of finding translation. He published Yiddish short stories, novels, and dozens of plays. He emigrated to New York in 1921 and was a prolific Forverts contributor for many years. In 1935, the notoriously difficult Forverts editor Ab. Cahan cut Rosenfeld off, for reasons that are somewhat unclear. Not long after, Rosenfeld was diagnosed with stomach cancer and died in 1944.

Rosenfeld was widely read in his lifetime and left behind an enormous body of work. And yet, all that’s been translated of his work until now are a couple of short stories. But in 2020, Rachel Mines published a collection of translations of his work, The Rivals & Other Stories. Mines was a Yiddish Book Center translation fellow and The Rivals is a great example of the YBC Fellowship program paying rich dividends on its investment in translators.

Rosenfeld’s stories are not for the faint-hearted. Mines says he was acknowledged in his day as a pioneer of psychological realism in Yiddish. Child abuse, rape, and suicide are prominent in his stories. As I read through The Rivals, I had to remind myself that they were not meant to be read together, but carefully digested, one at a time, with significant time between them. And though I’m generally not on the side of the fickle Cahan, I can understand his distaste at Rosenfeld’s weighty grimness.

There are no happy endings in these stories. But for all their darkness, I can easily imagine readers powerfully connecting with them, relieved to see their own hidden pains reflected and honored. “Mazl Tov,” for example, is about a young married couple seeking an abortion. Over the course of the story, the woman descends into terrible psychic and physical pain, while her husband merrily abandons himself to an evening of cards with the abortion provider in the next room. It’s an almost impossibly agonizing read. The pain of the woman feels so real, though, the reader feels honor bound to stay close, even as her husband abandons her.

Rosenfeld’s characters are not just the victims of trauma, but of the modern Jewish condition: hovering uncomfortably between the Jewish and non-Jewish world, between a world of obligations and a world of choices. They are constantly tormented by new desires. A recurring theme in The Rivals is characters who hunger (for food, sex, or experience), and when presented with an opportunity to satisfy that hunger, are driven mad with indecision. It is these moments which highlight Rosenfeld’s exquisite literary skill: A spinster sister buries a ripe, juicy pear rather than eat so perfect a gift; an apprentice visiting his boss at Passover is so overwhelmed by the offer, and his own desire, that he cannot take “even a single nut.”

The landscapes of Sholem Aleichem and Jonah Rosenfeld initially seem like they couldn’t be further apart. The world of Sholem Aleichem is warm and full of life, as exemplified in our hero, Moshkeleh the Thief. As Ephraim Shoham-Steiner writes (in a different context), “Crime exemplifies empowerment and vitality, contradicting the bleak picture of a subdued and disempowered minority.” When the wealthy merchant Chaim Chosid’s daughter is abducted and taken to a monastery, his many “silken” sons-in-law are limp as noodles, and just as useful. It is only Moshkeleh who has the vitality to take decisive action and retrieve the wayward daughter.

Rosenfeld turns inward, a place that is cold and bleak, where indecision leads to misery and decisive action only leads to tragedy. But both authors are grappling with a new condition of confusing and sometimes impossible choices. Indeed, Sholem Aleichem rips the rug out from under the reader, closing Moshkeleh’s story with an uncomfortably ambiguous coda. Perhaps our discomfort is not just in the lack of narrative resolution, but in its intimations of a new world of freedoms for Jews, a world where none of the choices turn out to be right.

MORE: Moshkeleh the Thief translator Curt Leviant will be in conversation with Dvora Reich as part of an upcoming YIVO book talk. Oct. 7, 1:00 p.m. Register here (includes link for book purchase discount) … If you’d like to read Moshkele in the original Yiddish, Refoyl Finkel has added a digital version of the Yiddish text on his (very useful) website.

ALSO: On Oct. 14, the Yiddish Book Center presents a lecture by Dr. Jeffrey Veidlinger, “The Pogroms of 1918-1921 and the Onset of the Holocaust.” In his new book, In the Midst of Civilized Europe, he explores how “hundreds of Yiddish-language testimonies awakened the world to the danger Jews were facing in Europe on the eve of the Holocaust.” Register here … Interested in working on your mastery of Yiddish adjectives? Take a 90-minute workshop with Ekaterina Kuznetsova, co-founder of Yiddish Berlin. “A Workshop on Yiddish Adjectives” will focus on “use and placement of basic adjective forms, the declination of adjectives in different cases and genders, and the use of comparative and superlative adjectives.” All skill levels welcome. $35, Oct. 30, register here … The Klezmer Institute is one of the newest power players on the klezmer research and performance scene. Between October and December they’ll be hosting a series of events called “Gramophone in Focus: Cataloguing, Collecting, and Contextualizing Early Recorded Jewish Music.” Go here for more details … Chicago YIVO Society is offering Yiddish classes for all levels this fall. Register right away, classes start in October.

Rokhl Kafrissen is a New York-based cultural critic and playwright.