Is the Ark of the Covenant in Ethiopia? 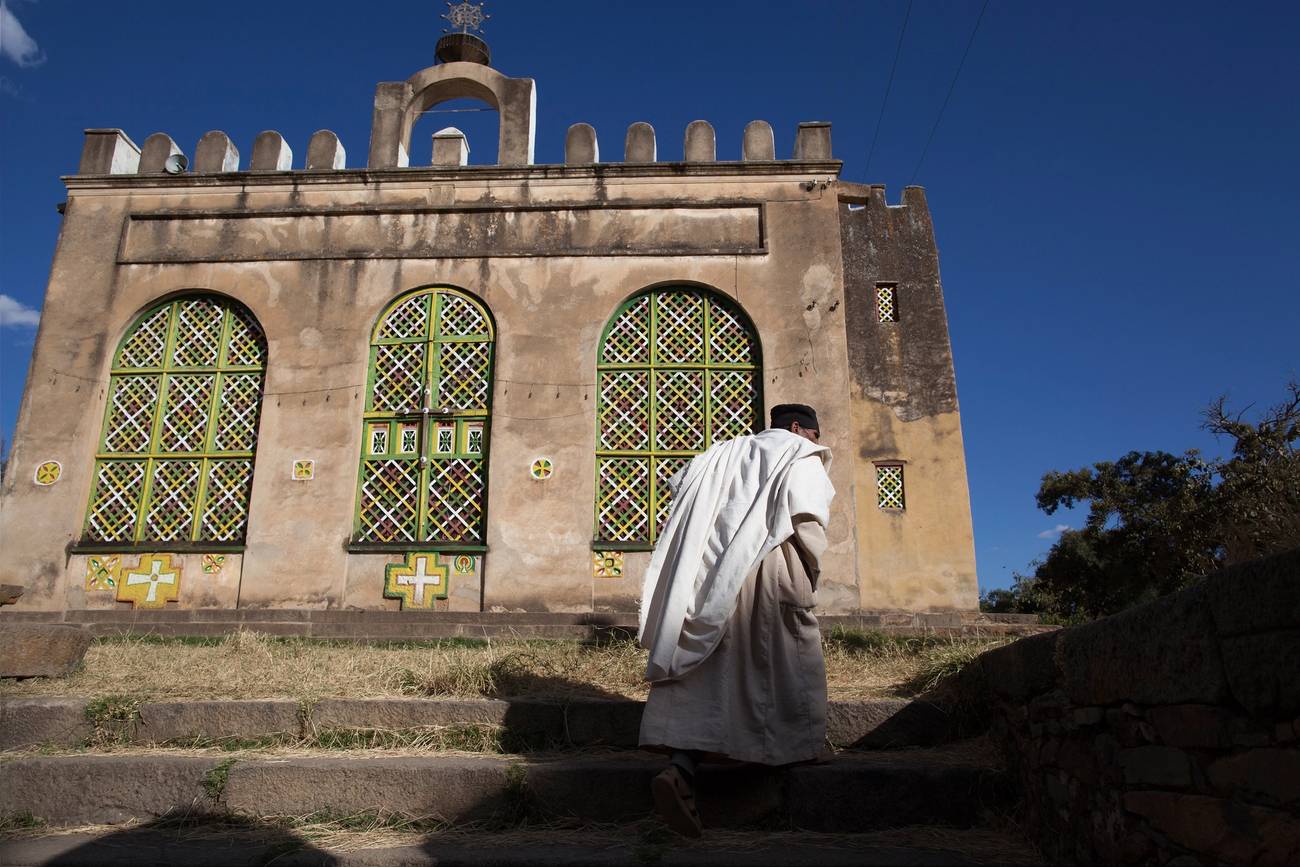 Priest on his way to the St. Mary Church of Zion in Aksum, Ethiopia, on Jan. 25, 2011MATJAZ KRIVIC/GETTY IMAGES

Every four or five years, one can read an article in a newspaper or watch a report on TV or YouTube that the Ark of the Covenant, the sacred object of the ancient Hebrews roughly modeled on the Egyptian barque that transported souls into the afterlife, is kept somewhere in Ethiopia, where it has resided for the past 3,000 years. So where is it?

Today, every Ethiopian church is built according to the same tripartite model: In the center, there is the Holy of the Holies (meqdes), where a replica of the Ark of the Covenant is kept; only priests are allowed into this part; then there is the Holy Place, qedest, where communion is given; and the outer space, qene māḥelet, “modulated poetry,” where the “scribes” acting as Levites chant praises and worship. As such, the structure of the church is modeled on the Jewish Temple in Jerusalem. The Ark of the Covenant, whose replicas are kept in every Ethiopian church, is said to be in Aksum, in the Head Church of the Churches, Holy of Holies, the Virgin Mary of Zion. There, a priest appointed for life watches over the holy receptacle. He is not permitted to leave the precincts, and he appoints his own deputy while still in life. No one, not even the head of the Ethiopian church, the Abuna, “our Father,” is allowed to see the Ark.

It is hard to say exactly when the Ark of the Covenant was last seen. The original might have been lost during the later period of Solomon’s life when he turned to the Egyptian gods of his wife (of whom it was said, “the king’s daughter is all glorious within”). Soon after Solomon’s death, when the Pharaoh Shishak came to Jerusalem to help his son-in-law, Jeroboam, split Solomon’s realms, King Hezekiah is said to have hidden the Ark (Steven Spielberg’s first Indiana Jones movie, Raiders of the Lost Ark, is based on this plausible assumption).

During the reigns of Hezekiah’s evil son and grandson, Menasseh and Amon, there was no Ark in the Jerusalem Temple. Amon’s son, King Josiah, instigator of the Deuteronomist reform, had the Ark returned to the Temple (2 Chronicles 33-35:3), but then hid it again, according to the Babylonian Talmud. Alternately, Jeremiah hid it, according to 2 Maccabees 2:4-5.

In early Islam, some Yemenite transmitters of the Israʾiliyāt traditions pretended to have had the Ark in Yemen since the days of Abraham. This tradition indicates that in the pre-Islamic Yemen—which happened to be mostly Jewish—veneration of the Ark had been known.

In Aksum, the present-day Eritrea and the adjacent parts of northern Ethiopia, where the current Ethiopian war has been fought for more than a year, the local pagan king, Ezana, converted to Christianity about 330 CE. We have his inscriptions both before and after his conversion. No mention of the Ark survived from his Christian state of Aksum, which began to disintegrate in the seventh century when the population migrated southwards.

The earliest attestation of the Ethiopian tradition of keeping a replica of the Ark in every church was that by the Coptic monk Abu l-Makārim Saʿdullāh who died in 1208 (Copts, Armenian, Syro-Orthodox/Jacobites and Ethiopians share the same denomination). In his book written about a decade prior to his death, Abu l-Makārim wrote that “the Abyssinians possess also the Ark of the Covenant.”

The story of the Ark of the Covenant being kept in Ethiopia is based on Kebra Nagast, the Glory of the Kings. In that text, the Queen of Saba, Makeda, visited Solomon in Jerusalem; the daughter of the Pharaoh, Solomon’s wife, became nervous and jealous; Solomon sleeps with Makeda and she leaves back home; a son, Menelik (a problematic name) is born to her, who visits his father, Solomon, at the age of 20; he brings with him Solomon’s ring, so that the king could identify him. Solomon wants Menelik to stay, but Menelik wants to go to Ethiopia, for he knows that this country will be the most blessed of all other countries and the true religion will thrive there. Solomon sends Menelik back with a suite of the firstborn sons of the Jerusalemite nobility and priesthood. Some of them steal the Ark replacing it by a replica (!), with Menelik discovering their trick only once it became too late to tell his father. This is how the Ark came to Ethiopia.

In this story, the nobility of Ethiopia are Israel in the flesh. When the Savior came, the Ethiopians became Israel in spirit, too. When all the Christians, except for Ethiopians, Copts, Armenians, and Jacobites, went astray from the true religion of pre-Chalcedon, the Ethiopians became Israel for the third time—as the physical descendants of the Chosen people, as the believers in Christ, and as the only true Christians left in the world. In the end, according to this mythology, the Ethiopians will vanquish the Jewish kings of Yemen and divide the world with the Last Roman Emperor (Heraclius, R. 608/610-641; in his days Arab Muslims arose and captured Jerusalem).

Kebra Nagast presents itself as the narration and prophesying by Gregory the Illuminator of Armenia during the First Council of Nicaea in 325 (Ethiopia was to become Christian in about a decade; Gregory did not attend the council, but his son, Aristaces, did). The Kebra Nagast tells that it was originally written in Coptic, then translated into Arabic, and then translated into Ge’ez in 1321; though the Arabic substratum can be traced, no Coptic can be detected.

The Kebra Nagast is often considered to have been written, using some older materials, in order to legitimize the new usurper dynasty, ruling from 1270 until the Derg came to power. This usurper dynasty overthrew the Zagwa dynasty (c. 900-1270) of such great kings as Lalibela (1181-1221), and pretended to be a restored Solomonic dynasty of Menelik I. Indeed, there was no mention of the Ark in Ethiopia under the Zagwa, and their churches were built in a quite different way without a replica of the Ark in the center.

The likely last non-Ethiopian person who saw the Ark of Aksum was the most important Ethiopiologist of the 20th century, Edward Ullendorff (1920-2011). A Christian from Zürich, Ullendorff did his Semitic and Ethiopic studies at the Hebrew University in Jerusalem, where he met and married his Jewish neighbor, Dina; the Second World War cut his studies short and he joined the British army, serving in Ethiopia, of course. There, Ullendorff became a close friend of Haile Selassie, the 225th monarch descended from Menelik, son of Solomon (see above) whose autobiography he would later translate. After the war he helped to establish the Ethiopian school system, which has been the best in the Third World and one of the best in the world. Unfortunately, the system covered only three cities.

In 1941, while a British officer, Ullendorff had a rare chance to examine the Ark kept in Aksum; in an interview with the LA Times from 1992, he said flatly: “I’ve seen it. There was no problem getting access when I saw it in 1941 … You need to be able to speak their language, classical Ge’ez … they have a wooden box, but it’s empty. Middle- to late-medieval construction, when these were fabricated ad hoc.”

Dan Shapira is an interdisciplinary historian and philologist at Bar-Ilan University. He is working presently on medieval and early modern Jewish minority communities, the Crimea, and the Khazars.