The Modern Festival of Lights 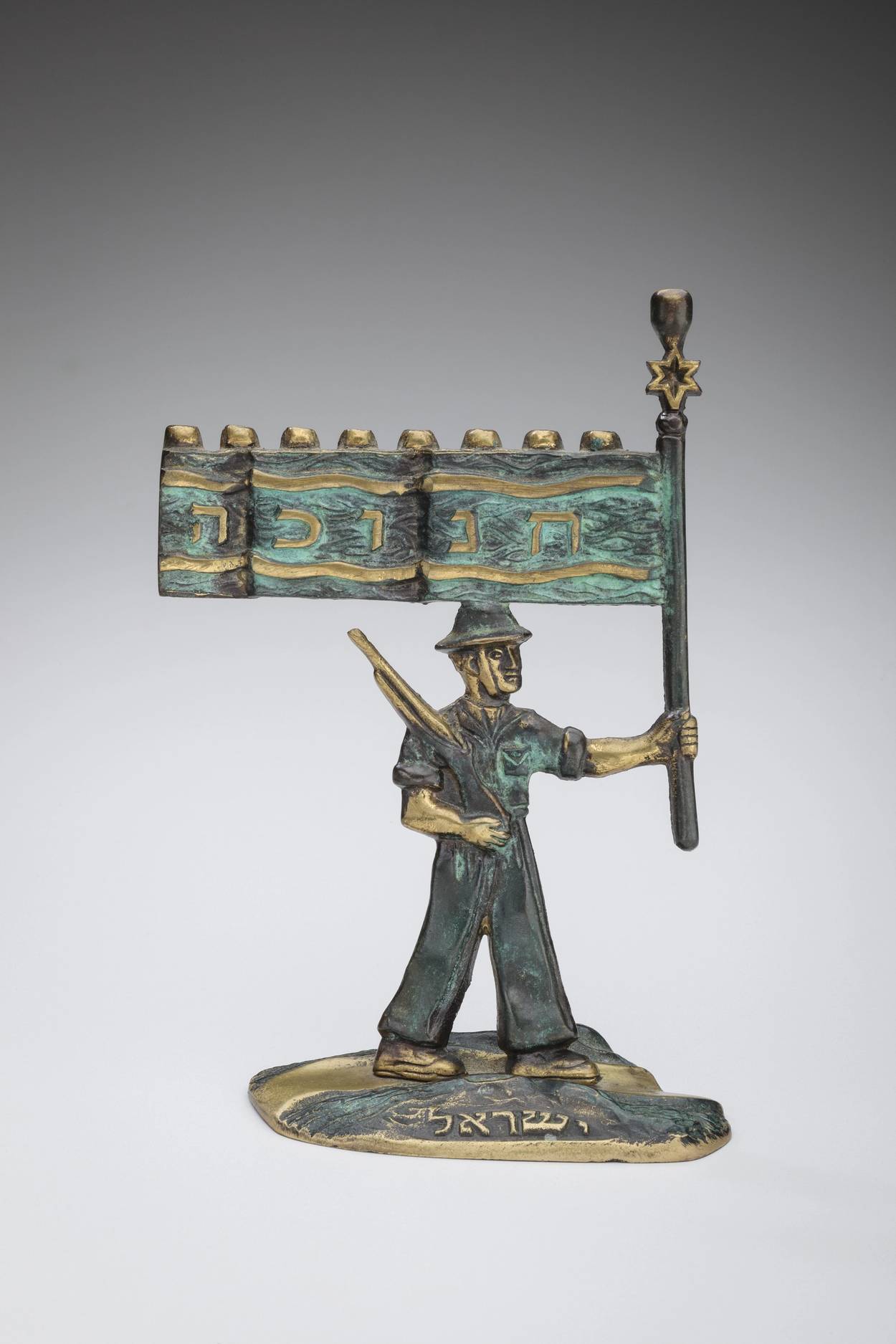 O fall the glorious objects on display at the Jewish Museum in New York or resting in its storerooms, awaiting their turn in the limelight, my favorite happens to be a constellation of eight tiny, bowlegged chairs somewhat the worse for wear. Fashioned inexpensively out of lead and tin and bearing the dents of time and the scars of use, the chairs, when combined, turn into a Hanukkah lamp. Back in the late 1880s, in Belarus, whence they came, all anyone had to do was to arrange the chairs in a row; lift up their lids, or erstwhile cushions; pour in a glug of oil; affix a wick to the little hole in the center of each chair; light a match and, voilà, furniture that glowed in the dark, illuminating the Festival of Lights.

My affinity for these miniatures runs deep. It’s not just that I’m beguiled by their diminutive, dollhouse characteristics, which I am, or that I have a thing for chairs of any size, which I do. It’s that these ritual artifacts speak to me of portability and movement, of adaptability and resilience—qualities in which the festival of Hanukkah, especially in its modern iteration, abounds.

Once a backwater of a holiday, whose appearance on the Jewish calendar was greeted with a modicum of fanfare, Hanukkah in the New World loomed ever larger and larger, an occasion for gift-giving, family gatherings, public spectacle, and Jewishly themed expressions of mirth. (Yes, mirth.) Where so many Jewish ritual practices either contracted or languished in 20th-century America, a consequence of modernity, this ancient holiday expanded its hold, giving rise to a panoply of newfangled ritual devices, practices, and even foods, among them bite-size tuna fish sandwiches molded in the shape of mini-Maccabees, and a dish known as menorah salad, whose ingredients—cottage cheese, bananas, and maraschino cherries—came together to form a menorah. Yum!

Those of us who study these things draw on a number of explanations to account for Hanukkah’s mighty surge in popularity. The Jewish holiday’s calendrical proximity to Christmas, whose celebration over time also became increasingly more pronounced, moving from the sanctuary and the domestic hearth into the marketplace and the civic square, is one explanation. When seen from this external perspective, Hanukkah benefited from its timing as well as its embrace of consumerism. Another interpretation, shifting its point of reference, holds accountable the rise of the State of Israel and its latter-day Maccabees, those who fought in the War of Independence and in subsequent battles. Heightening the connection between ancient times and our own, Zionism supplied those who hungered for an organic rather than a manufactured rationale with one that rang true and ever so timely.

A third perspective relates Hanukkah’s appeal to the growing child-centeredness of postwar America, that era of the baby boom, and with it, parental as well as communal attempts to render Judaism more kid-friendly, less austere and restrained, and much more lighthearted and perhaps even fun. Whatever explanation you prefer, it all “goes to show that if you work away at it, you can revive a holiday,” concluded one American rabbi in 1949, bemused by the enthusiasm his otherwise inattentive congregants brought to their celebration of the winter holiday.

Hanukkah menorahs were at the ready. Gone were the days when American Jewish families made do either by melting a wax candle onto a wooden ruler, or relying on their children’s Hebrew school arts and crafts projects, which invariably generated a hanukiah distinguished more by lumpishness than elegance. By the 1950s, the marketplace—suburban synagogue gift shops, especially—were awash in product, much of it state-of-the-art and proudly modern. Two distinctive kinds of menorahs stood out above the rest.

Many popular postwar Hanukkah menorahs were imported from the Holy Land. Bearing a stamp that proudly read “Made in Israel” and brandishing a distinctive, blueish-greenish finish akin to verdigris, those fashioned out of patinated metalware, or greenware, flew off the shelves. A canny admixture of modernity—of chemistry and mass production—and antiquity, these tarnished copper-toned ritual objects were nothing if not versatile. Lightweight, affordable, and easy to clean—no bothersome polishing necessary—they took shape as shields and as soldiers, olive branches and jugs. At once a salute to the present and an homage to the past, these “artistic artifacts” also tidily summed up many of the impressions postwar American Jews had of Israel: ancient, yet modern; rooted in history, but forward-looking; a latter-day miracle.

For all their appeal, imported Israeli Hanukkah menorahs stopped short of cornering the American market. Fierce competition came in the form of a homegrown alternative: menorahs with a chromium finish. When, in the form of an alloy, chromium was added to iron and steel, the metal not only prevented, or, in the lingo of its day, “resisted” corrosion and rust, it also gave rise to a host of contemporary appliances, decorative elements, and household implements, from the wire that “toasts your bread at breakfast” to bathroom fixtures, elevator doors, “automobile jewelry,” and, increasingly throughout the 1940s and into the postwar years, to cocktail sets and serving trays as well. By then, chromium had become a “byword for a pleasing, bright, non-tarnishing finish of great durability.”

Some of the uses to which chromium is now being put, rhapsodized Colin G. Fink, a Columbia University professor of electrochemistry, in the pages of The Scientific Monthly in 1937, “were not even dreamed of a few years ago.” Even he, one of its most ardent fans, would never have envisioned chromium Hanukkah menorahs, but there they were, a decade or so later, manufactured by the Cromwell Silver Manufacturing Co., and all the rage among American Jewish consumers who patronized the suburban synagogue gift shop.

A dead ringer for silver but considerably less expensive and much easier to clean, requiring little muss or fuss, a chromium menorah appealed to the budget-conscious, practically minded Jewish housewife of the 1950s who found its lightweight body easy to carry from room to room or from window ledge to window ledge. Besides, this novel gift item never loses its sheen and always “gleams.”

That chromium menorahs, much like their newfangled Israeli cousins, married innovation with tradition, chemistry with history, deepened their allure. By uniting an ancient ritual object with a modern substance, they rendered Hanukkah as up-to-date, relevant, and shiny as the chromium-inflected bikes in the driveway, the cars in the garage, and the household appliances in the postwar kitchen.

Surely it’s no coincidence, then, that the patinated copper hanukiah and its chromium cousin, both the beneficiaries of modern technology, presided over the postwar Hanukkah marketplace. Together they stoked the American Jewish imagination, lighting a way forward.

Jenna Weissman Joselit, the Charles E. Smith Professor of Judaic Studies & Professor of History at the George Washington University, is currently at work on a biography of Mordecai M. Kaplan.