The fates of Herzl’s son and daughters complicate the legendary origin story he shared with the world. 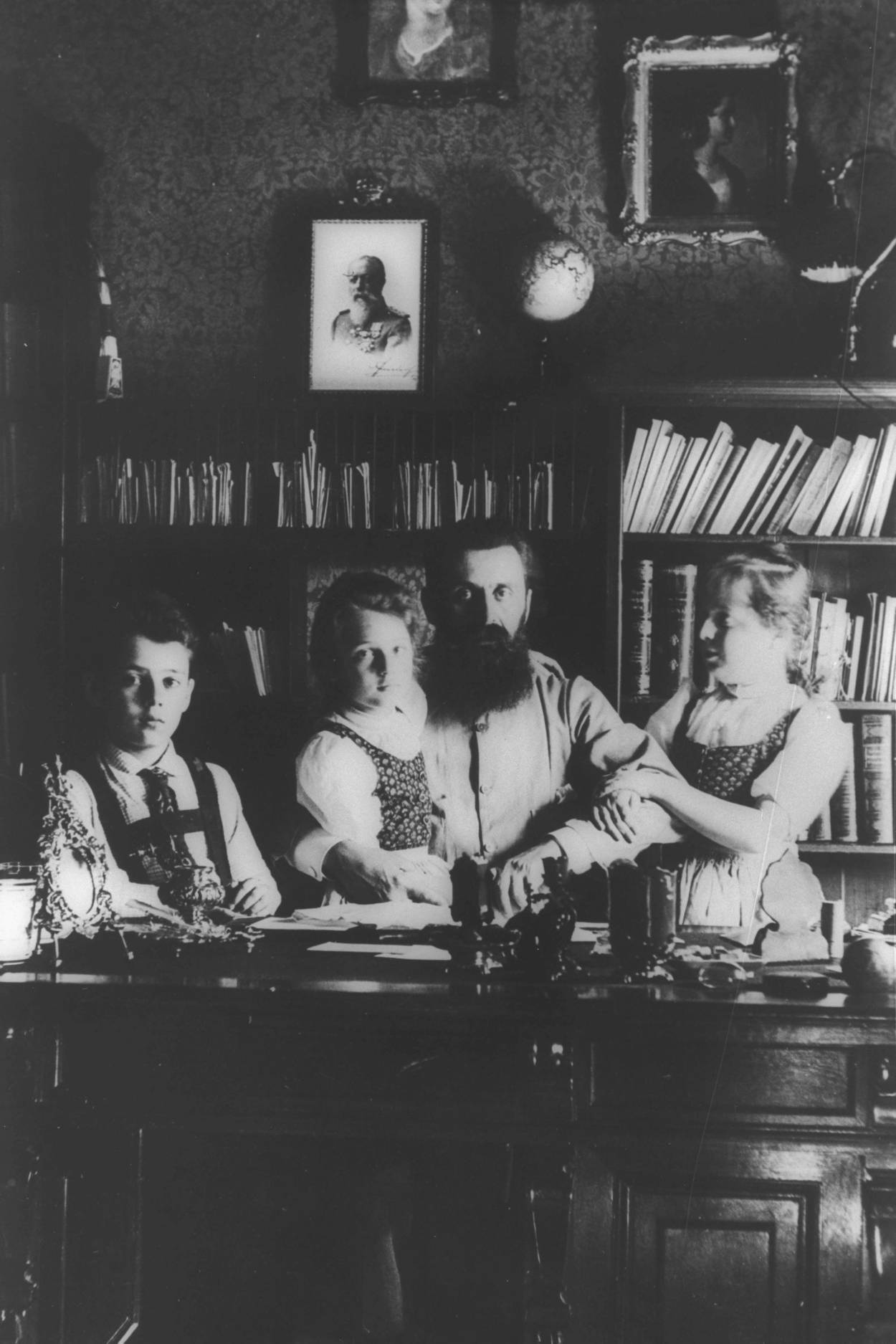 Theodor Herzl with his children in his Vienna study, 1897WIKIPEDIA

Theodor Herzl’s narrative about his ancestry has long been shrouded in legend. Herzl told his earliest biographers that his paternal great-grandfather, Lobel Herzl, “was a Spanish Jew who was forced in Spain to accept Christianity. To escape the Inquisition he emigrated, and as a Marrano, re-Judaised in Constantinople.” Jacob de Haas has noted that “this tradition was related to the author by Herzl at almost their first meeting in London in 1986.” Alex Bein, another confidant and early biographer of Herzl, relates an even more elaborate and mythic version of this tale. In this retelling, Herzl’s distant ancestors were two Spanish Jewish brothers who were forced by the Inquisition to convert to Christianity and join a monastic order. Their intellectual and organizational talents were such that they rose to leadership levels in the order, although secretly they observed Jewish ritual whenever possible. Years later the head of their order sent the brothers overseas on a secret mission for the church. Taking the opportunity to flee, they made their way to Constantinople “and renounced the religion which had been forced upon them.”

Herzl’s self-image, and the image he promoted, emulated tales of classic heroes. He was descended, he claimed, from kings and legends. Note his oft-quoted diary entry of late 1897, where he adopts a regal tone:

“Were I to depict the Basel Congress in a word—which I shall refrain from uttering publicly—it is: In Basel I founded the Jewish State. If I said this aloud today, the answer would be universal laughter. Perhaps in five years, in any case in fifty years, everyone will recognize this. In truth a state exists by the people’s will to be a state.”

While Herzl’s political legacy was of enormous significance, his personal legacy, particularly the fate of his three children, was ultimately tragic. The difficulties of the Jewish-Christian relationship, a major theme in Herzl’s sense of self, intruded in its most troubling forms in the lives of his three children. As the historian Ilse Sternberger noted, “Although Herzl’s political child, Zionism, managed to survive incredible difficulties to become the Jewish Homeland to which he dedicated his life … his physical children did not, struck down by relentless fate like protagonists in a Greek tragedy.”

The children lost their mother, Julia, in 1907, three years after Herzl’s demise. Each of them suffered greatly from the loss of their parents. Pauline, Herzl’s eldest child, had a very unhappy adolescence. Her short-lived marriage ended in an early divorce. Pauline became addicted to drugs in her 20s, and within a few years she died from an overdose. Her brother and sister were devastated by her death. The middle child, Hans, in particular, was burdened by terrible feelings of guilt for not being able to save his sister from the ravages of addiction.

Hans suffered the strangest fate. Defying Jewish custom, his parents decided not to circumcise him in infancy. His mother objected to the procedure; his father did not insist on it. News of this defiance of Jewish law angered many in the Zionist movement. When Hans was 15, two years after his parents’ death, his wards in the Zionist leadership pressured him to undergo circumcision. Afterward, Hans was schooled in England, where he was attracted to various Christian doctrines. After a few years in England, despairing of finding a spiritual home within a Jewish environment, Hans converted to Christianity. Dissatisfied with the Baptist denomination into which he was first received, Hans turned to the Roman Catholic Church. He soon left the church and returned briefly to British Liberal Judaism before committing suicide in 1930. He was 40 years old.

Theodor and Julia Herzl’s youngest child, Trude, was wracked by mental illness. She was married briefly to textile manufacturer Richard Neumann. Their only child, Stephen Theodor, was brought up in England, where Trude was institutionalized for many years. During World War II she was taken from her mental hospital to the Nazi camp at Terezienstadt, where she died. Thus two of the Herzl children took their own lives while the third fell victim to the forces of anti-Jewish hatred that Herzl had predicted and feared.

When the Israeli government arranged for the removal of Herzl’s remains from Vienna and their reburial in Jerusalem in 1949, they also moved the remains of his parents from Budapest and reburied them in the national shrine on Mt. Herzl, the mountain named in his honor. The ashes of his children’s mother, who was cremated in 1907, have been lost, and the ashes of his youngest, Trude, murdered by the Nazis, were, of course, lost among the myriad dead of World War II. But the bodies of Herzl’s children Pauline and Hans were left in their graves in the cemetery in Bordeaux, France.

In 2004, Israel marked the 100th anniversary of Herzl’s death and the government passed a law setting a date for an annual commemoration of the founder’s legacy. Renewed attention to Herzl’s legacy brought the fate of his children to public attention. Some secular members of the Knesset, now aware of the unfulfilled request in Herzl’s will that his children be buried near him, proposed the “repatriation” of Pauline’s and Hans’ remains. Members of the religious parties objected, as Hans had converted to Christianity and Pauline had been addicted to drugs.

After a lengthy debate, the Israeli government finally had the remains of Pauline and Hans reburied in Jerusalem on Mt. Herzl in 2007. In a controversial ruling, the Sephardic Chief Rabbi Shlomo Amar declared that Hans’ conversion to Christianity was the result of mental illness, and not the result of a rational decision, and therefore he could be reburied in a Jewish cemetery.

Herzl’s own narrative of origins, which emphasized the story of his ancestors’ forced baptisms and their eventual return to Judaism, was thus subverted by his children’s stories, particularly the tale of his son. As Hans himself realized, Herzl’s children were fated to be neither Jewish nor Christian. The Jewish state that Theodor Herzl envisioned came into being 44 years after his death. The family he and his wife established came to an end with the suicide of their only grandson, Trude’s son Stephen Theodor Norman, in Washington, D.C., in 1946, not long after he found out that most of his family had died during the war. In 2007, the Israeli government arranged the transfer of Stephen’s remains for reburial in the family plot on Mt. Herzl.

Shalom Goldman is Professor of Religion at Middlebury College. His most recent book is Starstruck in the Promised Land: How the Arts Shaped American Passions about Israel.